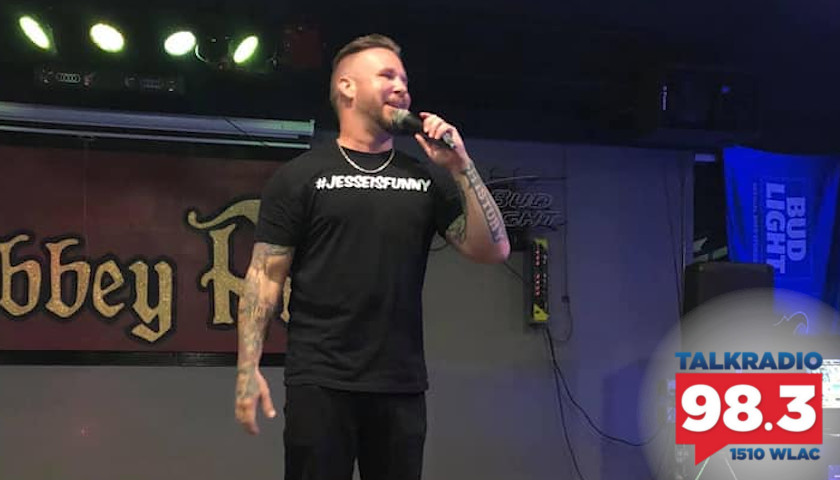 Live from Music Row Tuesday morning on The Tennessee Star Report with Michael Patrick Leahy – broadcast on Nashville’s Talk Radio 98.3 and 1510 WLAC weekdays from 5:00 a.m. to 8:00 a.m. –  host Leahy welcomed comedian Jessie Peyton to the newsmakers line to talk about being the opening act for Chad Prather, a conservative comedian, and his upcoming show at the Franklin Marriott February 12.

Leahy: We are joined in studio by Nashville entrepreneur promoter and merchandising specialist Lenny Heron and on our newsmakers line comedian Jesse Peyton. It’s a change of pace Tuesday. Jesse good morning and welcome to The Tennessee Star Report.

Peyton: Good morning from Texas! How are you guys?

Leahy: You know, Texas and Tennessee we are intertwined aren’t we? Two states.

Peyton: So are our football teams!

Peyton: I don’t know if it’s confirmed. It’s been going through the grapevine for the last two days.

Leahy: Yeah. I’m in that same category that it’s not sure it’s been confirmed because you know, you see all these rumors left and right. So, Jesse, we have not had or promoted here on The Tennessee Star Report a live venue for almost a year. And now I guess you are the opening act for Chad Prather. He’s coming here to Franklin, Tennessee at the Franklin Marriott on Friday, February the 12th. As a comedian, what’s the coronavirus pandemic been like for you? Have you been doing live venues or how’s that worked?

Peyton: We have been. Chad and I have we’ve done probably 30 shows in the last four months.

Leahy: That’s remarkable. In what states have you done those shows?

Peyton: Mostly in Texas. Texas is pretty open. There’s a lot of mandates here that there are requirements for shows but we’ve done at least 25 shows in Texas since the pandemic started. I actually met Chad in Bryan-College Station during the pandemic doing shows. So I was the opening act booked by an agency for him and we hit it off and he took me on tour with him. So here we are.

Leahy: Texas is kind of leading the way and opening up live events. That’s always the case. More liberty in Texas than perhaps most states in the union.

Peyton: That’s true. We love it here. He’s running for governor in 2022. So it’s nice being on the road going to other states and bringing my own governor.

Leahy: So I this like a Pat Paulsen run for governor president in 1968 thing?

Leahy: Okay. I like that. A hat tip to Pat Paulsen.

Leahy: This was way back in 1968. He was on the Smothers Brothers comedy hour and was kind of a deadpan humorist. He did get some votes for president though.

Herron: He probably got a lot of votes.

Leahy: He got more than the Communist Party back then but perhaps not too much more. but he was a fun guy. So tell us how long have you been a comedian Jesse.

Peyton: I’ve been doing about 10 years. I’ve uh, I’ve toured nationally as an opening act for about two. And I’ve toured as a co-headliner with Chad for the last five or six months. So it’s been pretty remarkable. It’s been a good year for me despite what’s going on.

Leahy: When you see all these specials about comedians like Jerry Seinfeld has Comedians in Cars getting coffee and they talk. They almost all are left-wing lunatics in their politics.

Leahy: It seems like to me. Is there a club that you’re not allowed into or how does that work? How do other comedians react to you?

Peyton: I started comedy and I wasn’t very politically motivated in my act. So I kept politics to myself and I kind of didn’t incorporate that because of the stigma. It’s funny how logic and rationale and being capitalistic will stigmatize you in a community that sticks their hand out and doesn’t want to work. So I like to work hard and I do.

That’s how I got to where I’m at and you can be ostracized for that initially. I kept it to myself and then as I’ve kind of blossomed in the industry, I guess I don’t care anymore. I have become more vocal with it. And Chad’s obviously kind of spearheaded that some as well. So yeah, I’ve definitely felt a lot of pushback from that.

Peyton: Well with Chad we’re doing the Unapologetic Tour 2021 where we’re doing 50 cities in 2021. And we’re actually co-headlining. I am the opener for him. He goes second. But both of us do 40 45 minutes.

Peyton: It’s a lot of practice and a lot of writing. After doing 200 shows a year you kind of get an autopilot when you get up there. But Chad and I are a different breed. It’s kind of like a yin and yang we have varying styles which I think really lends itself to a good show because you come out for Chad knowing what you’re going to get and then you get me and it’s a different punch in the face.

Leahy: Okay. So tell us about how you put your 40-45 minute act together. Do you write a series of jokes? Do they have a pattern to it? How do you do it? I saw this Jerry Seinfeld special and he like rights jokes all the time, all the time, all the time. And one day they like took all his notes out and they put it like on a huge street and it filled up the street with all of his notes on jokes. Is that how you do it? How do you keep track of your jokes?

Peyton: Well it’s 2021 and most everything is done electronically now. I’ll come up with a funny premise something funny will happen. All comedy that we write comes from a real place. Whether the premise is something that actually happened or an antidote or something that we actually were part of. So you do that and you expound upon it and you kind of you know, it’s you blend in the funny with the actual real and you build an egg from that.

And then after a while it just you find a rhythm, meter, tempo, and order and you construct a set. It’s mainly stories and stuff from my own experiences and my own path. But yeah, my notes are similar. It won’t be lined up in the street, but I’ll have megabytes on my note section on my phone eating up data because of that. So that’s definitely true.

Leahy: So you talk about rhythm and pacing, you know in a radio program like this rhythm and pacing really matters. In other words. You want to put information out that moves fairly quickly but you don’t want to step on the other person’s line. You have a dialogue back and forth. To me pacing and timing for a comedian is critical. Have you found that to be the case?

Peyton: Oh, absolutely and there are varying styles. like you talked about the guy who ran in 1968 was more deadpan. I’m a higher energy storyteller. I do a lot of crowd engagement stuff where I interact with the people in the audience. Not too much because you can’t let it slip away from you. You can’t lose command of the room. However, I like them more hands-on high energy, and less constrained. I like it to feel more organic than rehearsed if that makes sense.

Leahy: It sounds a little bit like I don’t know if you’ve followed the Tinkers which is an Amazon series and The Marvelous Mrs. Maisel, which kind of is a like a Joan Rivers type story and how she became a comedian. Have you watched that and do you have a reaction to that series?

Peyton: I didn’t see it but I heard a buzz about it. I’ve never seen that one so I’m not really familiar.

Leahy: Well, they’re all a bunch of left-wingers by the way. So I think you know, I think it’s time for The Marvelous Jesse Peyton and Chad Prather, right?

Herron: It’s time to bring them to Franklin and get your tickets now.

Leahy: Hey, Jessie. Thanks so much for joining us and we will see you Friday, February 12. Doors open at 5 o’clock. Where is the place where you can get tickets?

Leahy: All right. Hey, Jessie. Thanks for joining us. We’ll see you on February 12.