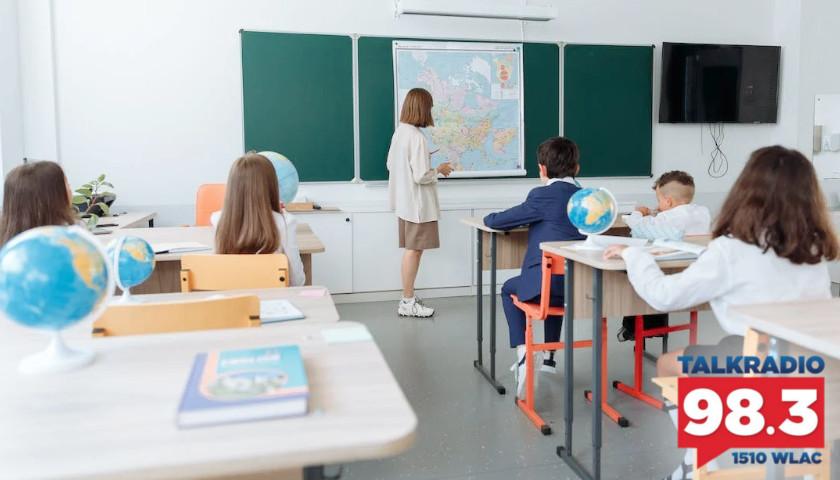 Live from Music Row Thursday morning on The Tennessee Star Report with Michael Patrick Leahy – broadcast on Nashville’s Talk Radio 98.3 and 1510 WLAC weekdays from 5:00 a.m. to 8:00 a.m. – host Leahy welcomed the head of Professional Educators of Tennessee, J.C. Bowman, in the studio to comment upon the recent letter from the U.S. Department of Education regarding the missing implementation of assessment and accountability requirements.

Leahy: In the studio, the head of Professional Educators of Tennessee. J.C. Bowman. J.C., I have in my hands a letter dated September 27th of this year from the U.S. Department of Education to Penny Schwinn, our commissioner of education here.

Bowman: Yes, there’s absolute trouble heading our way, and it could end up paying back, if you recall.

Leahy: Paying back who?

Bowman: It depends on how much they’re looking at …

Leahy: But they’re saying, hey, we sent you this review back in November. There are, like, 15 actions required.

I guess they’re suggesting you haven’t taken those actions, and therefore you’ve got to send us back a whole bunch of money. Is that what the Feds are telling us?

Leahy: When the federal government tells you or further action, this is what you might call a clue something bad might be headed our way.

Bowman: Listen to the ending of the letter, [it] says that in addition to the 2022 year, which is this year and 2023, no later than December 1st, 2022, the Tennessee Department of Education must provide documentation of the assessments that the TDOE would administer for the ’22-’23 school year.

Leahy: When you say assessments, is this like, the scores that the kids get?

Leahy: What is an assessment?

Bowman: Well, that’s the test that you take.

Leahy: The test the kids take. So I looked at the test numbers most recently reported, which came out this summer. They were not good. They were actually bad pretty much across the board. Slight increases from the worst ever during the pandemic, but still very bad across the state, it seemed to me.

Bowman: Yes. Well, in some areas, particularly more. But what we found is the schools that went back after the pandemic did better. So when you do that, Michael, your achievements are higher because you went back, but your gains are lower because you’re also being measured against the last year’s thing, where you were already in there doing better, so your gains aren’t as high. So when we celebrate gains, we’re all excited.

Leahy: Well, it’s a little bit like, you’ve gone from absolutely, totally terrible to just kind of terrible. And if you make that change in one year, you get accolades, which seems to me to be kind of ridiculous, because, sort of terrible is still pretty terrible.

Bowman: So there’s the whole gauntlet. But apparently, here’s where I think – I believe in transparency in government. I believe that we should see what’s going on.

We should be made aware of it and everything else. These things came out last year. I mean, in September 2021, the Feds sent a letter – a document, a report – saying you’ve got some problems.

Leahy: Until this letter came out.

Bowman: And let’s get credit, I want to get credit to where credit is due: TC Weber, a blogger here in Nashville,

Leahy: I think we’ve had him on once on the show.

Bowman: You should have him back.

Bowman: He came to Nashville as a guitarist and a musician, and he stayed, and he’s got a point of view. And he’s just more populist. And I don’t think it’s more ideology, but he definitely believes in transparency in government, and that’s the argument.

And then in November of 2021, they sent the other report. And what actions has our department taken since then? And then the whole year, last year, we’re all pushing this funding system for this, and you and I talked about it.

We’re going to end up having to raise taxes by implementing TISA. So now we got this. But that’s what sucked the air out of the room, rather than kind of going after these real critical issues and trying to fix it.

Leahy: So let me just step back and now remind our listeners why the Federal Department of Education, which I think should be abolished, why they get to tell the state of Tennessee what’s wrong.

Bowman: And that’s the million-dollar question. Here’s where we’re at. Either you got some real gross incompetence at the Tennessee Department of Education, in which case, if that’s the case, our governor needs to step in and he needs to explain this – not the commissioner, our governor does.

And then number two, and I go back to this, or if the department is overreaching, we ought to all join hands together and say, listen, Lamar Alexander, who is the principal author of ESSA, which is the funding mechanism …

Leahy: What is ESSA?

Bowman: Education, elementary, secondary. The thing that funds the money.

Bowman: And that’s what the BEP does now. The Basic Education Program is the current system.

Leahy: It provides more funding to the poorer counties.

Bowman: Yeah, equity – that word that Josiah likes a lot. (Leahy laughs) But back to this, is that, where we’re at, is again – or we should start talking together, and I give Lamar credit where he’s correct. Lamar was out in front.

People can like Lamar Alexander or not, but he didn’t shy away from controversy and he stepped up to the issues. And the governor needs to come out and step up on this. But here’s the point.

We should say, tell the federal government that, listen, we disagree with you. We don’t think that special ed students need to be taking the regular assessment test.

Leahy: Is that one of the things they say?

Bowman: That’s one of the things in there.

Leahy: Okay, so now this is a warning shot, though, from the Feds to the state of Tennessee. What possibly could go wrong subsequent to this warning shot?

Bowman: Well, and here’s where I think that one of the things that came in, one of the documents that they sent was that we are supplanting money.

What that means is you’re taking dollars that the state normally uses and they’re spending on hiring, whatever the position is.

Leahy: Hold on, is this Fed money?

Bowman: And the state takes a portion of it.

Leahy: But they’re saying, the Feds are saying you’re not spending that money the way you told us you were going to spend it.

Leahy: So they’re going to be upset about that.

Bowman: Oh, absolutely. And the one question that got me, it says right here in this math assessment, we’re supposed to test 8th-grade math students on the number three question. On the letter it says that that’s consistent with CDO’s approval of the ESEA consolidated state plan and you must submit a waiver request to extend the 8th-grade mathematics assessment exemption to reading language arts and lower. Basically, we just failed to file the exemption request. 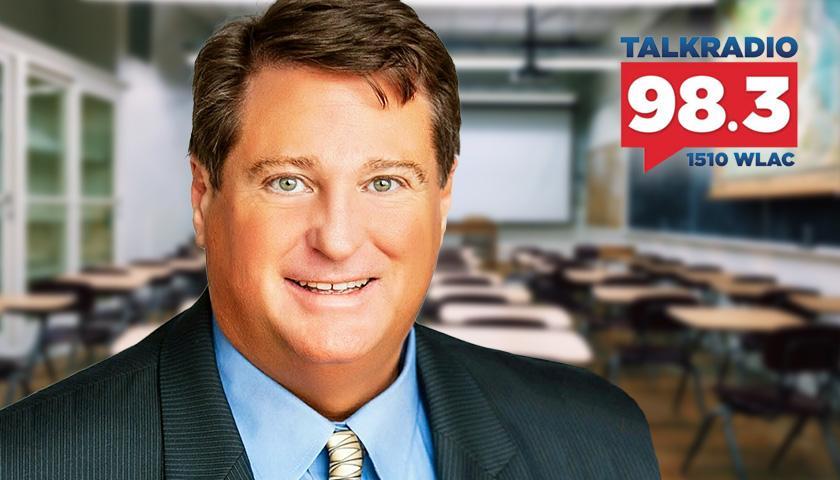 J.C. Bowman of Professional Educators of Tennessee on Williamson County School System’s Insistence That Teachers ‘Stick to a Script’

Live from Music Row Thursday morning on The Tennessee Star Report with Michael Patrick Leahy – broadcast on Nashville’s Talk Radio 98.3 and 1510 WLAC weekdays from 5:00 a.m. to 8:00 a.m. – host Leahy welcomed Professional Educators of Tennessee Executive Director and CEO J.C. Bowman in-studio to discuss the implementation of the Instructional Practice Guide for only Williamson County public school teachers, forcing them to stick to a “script.”

Leahy: Right now, ladies and gentlemen, a Marine Corps veteran, all-American guy who is the President of Professional Educators of Tennessee.

That’s the conservative or good alternative to the teachers’ unions. His name is J.C. Bowman. He’s in the studio with us. Good morning, J.C.

Leahy: Well, I am puzzled, J.C. I am puzzled. What on earth is going on in Williamson County Public Schools? What are they doing?

It’s hard enough being a teacher in K-12 public schools in Tennessee now as it is, but they’re kind of doing some odd things down there, and I think it’s only happening in Williamson County. You’ve been talking to some teachers about it. This thing is called what, IPG? What is that?

Bowman: Yes, it’s like a term called Instructional Practice Guide. And one of the things they’re making sure you’re doing is sticking to the script. And I find it odd now that it’s not an evaluation.

Leahy: Are you toeing the propaganda line? Is that really what it is?

Bowman: Yes, basically, my phone has blown up about this a little bit because we’ve had five or six teachers specifically really concerned. We know that one teacher at Grasslands Elementary School, it was on Channel 17, quit. She said, I’m done. They bring in two people from the central office …

Leahy: Now, how long have they been doing this IPG? What is it again?

Bowman: It stands for Instructional Practice Guide. Okay. And it’s a team. You’re supposed to be teaching your guide all the way through. It’s scripted learning. So basically, I hand you a script, and it would be like every morning you walk in here and I hand you a script to say, hey, Michael, this is what you’re speaking on today.

And you look at me and say, that’s just not happening. And we hire professionals. Williamson County has got some of the best teachers in the state, and we don’t trust them to do the job well.

Leahy: And they seem to be, I think it’s a very frustrating job right now to be a teacher, particularly in Williamson County, because they’re getting all of these instructions from the top that don’t make any sense, and the parents are unhappy, and it’s just a tough gig, it seems to me.

Bowman: Oh, it’s absolutely a tough gig. And like I said, these teachers are beyond frustrated. And I mean, I’m hearing as many as, they could get into the double digits.

Leahy: When did they start the Williamson County Public Schools? Headed up by Jason Golden, an attorney.

Leahy: When did they start doing this IPG thing?

Bowman: Apparently it started this year.

Leahy: This year? Just this year? In August?

Bowman: Yes. So remember last year when we had the teachers at Edmondson Elementary School that got in trouble for deviating off Wit and Wisdom this year?

Leahy: And Wit and Wisdom is sort of, I don’t know, the Woke curriculum.

Bowman: Well, it was brought in by our commissioner.

Bowman: I’m not going to go there.

Leahy: Yes, let’s not bring up the Dianne Feinstein connection that she interned for.

Bowman: But in seriousness. After she approved it, she pushed that particular curriculum into our schools, and for God knows what reason. It was adopted and the curriculum got chosen by Williamson County and depending on who you talk to, whether it’s a fair process or not, Williamson County comes in, they start doing it, and now they’re going to make sure these teachers are sticking to script.

If you say the word “short” or you use a different word and explain, that is not in that practical guide, you’re in trouble now. This is not an evaluation. This is just an observance. And I’m going to tell you something, it’s intimidating a lot of teachers.

Bowman: As far as we can tell, we’ve not heard any other complaints.