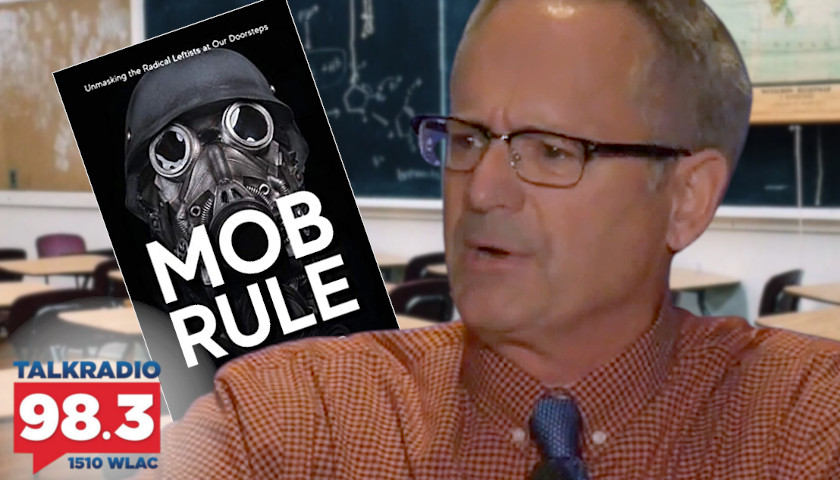 Live from Music Row Thursday morning on The Tennessee Star Report with Michael Patrick Leahy – broadcast on Nashville’s Talk Radio 98.3 and 1510 WLAC weekdays from 5:00 a.m. to 8:00 a.m. –  host Leahy welcomed the author of Mob Rule, Dr. Jake Jacobs to the newsmakers line to discuss his book Mob Rule and the indoctrination of children in public schools.

Leahy: We are joined on the line now by Dr. Jake Jacobs who is the author of a great book called Mob Rule. Jake, welcome to The Tennessee Star Report.

Leahy: Well, let’s start off. You have degrees in American history and biblical and Judeo-Christian studies from Arizona State University, and Ashland Theological Seminary in Northwest University. You are the president and founder of Politically Incorrect Institution. Love that name by the way. You’re the host of FreedomProject Academies And this great book the Mob Rule. You were a public high school teacher, is that right?

Jacobs: That’s correct. Well, I’m still working at a private school, an academy. I defended Governor Walker when the mob went after him in Madison and it got ugly with my colleagues. So I do that. And I work adjunct at a local University.

Leahy: Well, look I can tell you one of our themes of this program is that K-12 public education is beyond help because it’s so overwhelmed with political correctness. And they want to teach you all about how awful America is. But they can’t teach reading writing and arithmetic. And I’m sure during your days as a public high school teacher you had great difficulty dealing with that environment.

Jacobs: You know, Michael, I’ve been teaching in some form or fashion at the high school and university levels for 40 years, and I literally last night when the new president of the United States said he was going to get rid of this 1776 Commission I literally had a tear come down my eye because I realized when Lenin said you give me four years with the kids and they’re mine forever.

And this is exactly what’s happened. I’ve seen it evolve since the late 1970s. And I’ve seen it get worse and worse and worse. And it’s here. You’re absolutely right. What the government-controlled schools have done has been nothing less than left-wing indoctrination and it permeates from there into the culture, into the churches, and it’s destroying our Republic under God.

Leahy: And by the way, our good friend here on our program is Carol Swain. She’s one of our all-star panelists and usually comes in occasionally. Actually, she comes in most Thursdays. She’s off this Thursday but will be back next Thursday. She was a vice-chair of that 1776 Commission.

Jacobs: Yeah, I mentioned her in my book. There’s a whole section dealing with Uncle Tom and how she’s considered Aunt Jemima. As you know, the whole divisive terms used by the left and used by the Democrats. Larry Elder and a number of you know a number of great Black conservatives or Black Christians and Black patriots who love this country unlike Black Lives Matter and Antifa and the rest of hardcore lefties. I absolutely love Carol. She’s spot-on brilliant. Her Prager U stuff, I use it in the classroom all the time.

Leahy: Fantastic. And do you teach full-time in a private school?

Jacobs: Yes, but I’m actually going to be finishing up nowhere in June. I’m starting a podcast called the Jake Jacob’s Show. I’m going to dedicate now the remainder of the years I have on earth to fight this battle. This cultural left-wing battle that is out there to destroy our Republic. So I want to do what I can after 40 years of teaching and taking all that knowledge and connecting it to current issues.

Leahy: What grade, do you teach Jake?

Jacobs: I’ve got pretty much juniors and seniors. And then I get adult learners at a local university where they’ll come in. And they’re more apt to listen to what I have to say because they understand the real world now. They aren’t living in a world of teenagers. Not to dis teenagers but you understand that teenagers got a lot of other things on their mind.

Leahy: So let me also extend an invitation to you. You probably don’t know about this, but we hold every year for high school students a National Constitution Bee here in Brentwood, Tennessee. And we’re holding it again this year. It will be our fifth annual National Constitution Bee for any secondary school students. There is a $10,000 scholarship for the winner, $5,000 for second place and $2,500 for third place. And any kid in the United States can come. And we use the book that I co-authored called The Guide to the Constitution and the Bill of Rights for Secondary School Students as part of that. So you are invited to come down and be a guest speaker at that event.

Jacobs: Oh Michael I would love to be a part of that. This is exactly what we need in this nation. I didn’t know about your book. I’m going to have to get it.

Leahy: When we come back we’re going to talk about your book called Mob Rule and all the terrible things that are going on in this country and what we can do about it.