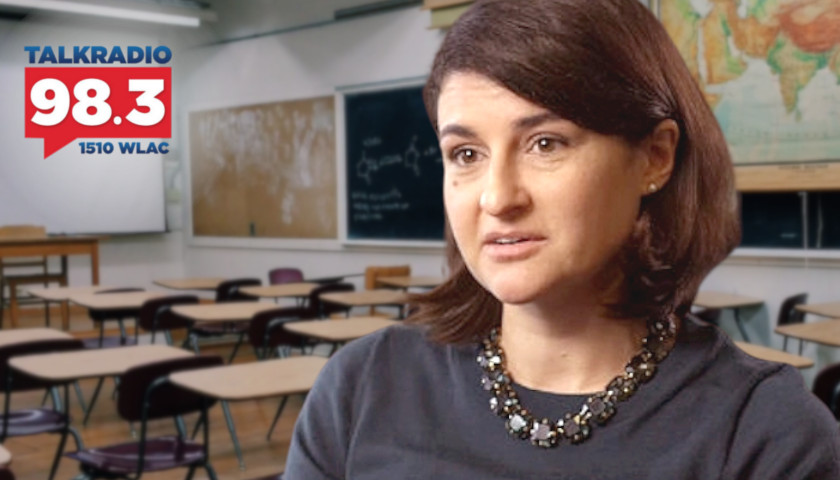 Leahy: We are joined now on our newsmaker line by Dr. Kathleen O’Toole, the Assistant Vice Provost at Hillsdale College. Welcome, Dr. O’Toole.

O’Toole: Hi. Thank you for having me.

Leahy: We are delighted to have you here. Very good news. I saw in Governor Bill Lee’s State of the State Address on Monday that he proposed a partnership with Hillsdale College to bring public charter schools to Tennessee that focus on classical curriculum.

O’Toole: Absolutely. Here at Hillsdale College, we are a 175-year-old institution, and we’ve been working with K-12 schools for over 30 years.

For the last 10 years, we’ve been working with public charter schools to bring classical education, which is the education that used to be commonplace in this country, to children across the country.

Through the Barney Charter School Initiative, we assist local groups of citizens in establishing public charter schools. We help them build these schools from the ground up, and we provide them with a rigorous liberal arts classical curriculum and teacher training because, after all, success in school is not just guaranteed by a rich curriculum, but you need excellent teachers who really know what they’re talking about and really know how to be effective in the classroom.

Leahy: For clarification, the name Barney Charter Schools – that’s not named after the cartoon dinosaur character. It’s named after a family named Barney?

O’Toole: (Chuckles) Yes. The initiative was made possible by a man named Steve Barney, who made a major gift about a decade ago that makes all of our work possible. Everything that we provide to these schools is given to them for free.

Everything we do is made possible by friends of the college who want to see a revival in American classical education and improvement in public education in this country. And so these schools apply to work with us.

If we accept their application we give them classical curriculum, teacher training, and teacher observations. And they come and attend conferences here in Hillsdale. And all of that is available to the schools at no cost to the schools themselves.

Leahy: Right now, how many Barney Charter Schools are there around the country?

O’Toole: We are working with 50-plus private and charter schools across the country. Some of those schools we have helped found through the Barney Charter School Initiative and some of them are schools that have come to us saying we want a more excellent curriculum – can you advise us?

And so it’s a nationwide effort. It serves students in every type of neighborhood in this country. And it’s a really exciting thing to see.

If we’re interested in human nature, which we as human beings all are, we’re asking ourselves, “who are we and what should we be doing with our lives?” How do we make choices that will give us the thing that all human beings want, which is happiness?

And to answer that question, we need to know about history. History gives us a lens into what human life has been like beyond our own time. And especially the rich and rigorous study of American history is important because we live in a country that is unique.

Our founding is unique. As the Federalist Papers say, it’s the product of reflection and choice, not accident and force. In other words, a group of smart people got together and thought about how a government should be structured and what the relationship between the government and the citizens ought to be. And that yielded the United States of America.

That means that if we want to understand ourselves, we can do it by understanding our founding first and foremost. And so we studied those things in Hillsdale-affiliated schools.

Students emerge from their K-12 education with a deep knowledge of American history, economics, American government, and also moral and political philosophy. All of these things help us understand how to be great citizens.

Leahy: Let’s talk about Tennessee. How many Barney Charter Schools are we likely to see over the next couple of years? And secondly, if somebody listening to this program says, “hey, I’d like to start a Barney Charter School where I live in Tennessee,” what should they do? Those are our two questions for you.

O’Toole: Yes, great. We’ve applied through an organization called American Classical Education for three charter schools in Tennessee. And those applications are with the local districts right now.

Leahy: Where are those charter schools?

O’Toole: It shows in three counties in Tennessee and we think that there’s a lot of possibility in the state.

Leahy: Which of those three counties do you recall?

O’Toole: We’re in Rutherford County. Let me look them up for you. And we’re encouraged by the governor’s excitement about it.

Leahy: Yes, he was very excited about it. I think that’s great. Rutherford County is in our listening audience. We’ve tracked a lot of reports about Rutherford County. The school board actually has turned down another charter school application there.

As you know, in Tennessee, and I don’t know what the school board is going to do with your application, but then if they turn it down, it goes to another higher education statewide group that would almost certainly approve it. When did you file that application with Rutherford County and what’s the status of it?

O’Toole: It’s just recently filed. Just in the last week. The applications are with Rutherford, Madison and Montgomery County.

Leahy: Ah-ha! Those are really great choices and I’ll tell you why. Rutherford County is a suburban county here in the Metro Nashville area. Montgomery County is also on the sort of the Northwestern suburban area. I think that you would have good chances there.

And Madison County is in the Jackson, Tennessee, area which has had, if you look at the three worst performing counties education-wide in Tennessee, they are Shelby County, Memphis, Davidson County, Nashville and Madison County, Jackson. So, I think you’ll have good luck in Madison. That’s my guess.

O’Toole: We’re really hoping for the best. We’re excited to introduce this model of education to the citizens of Tennessee, and we’re encouraged by the performance of our schools all across the country.

Leahy: As well you should be, Dr. Kathleen O’Toole, Assistant Vice Provost at Hillsdale College. I’m going to invite you to a little project. We’ve got a nonprofit here that does the National Constitution Bee every year. And we give away educational scholarships. We’d invite every Barney Charter School in the country to send kids there. This will be our 6th National Constitution Bee, with $10,000 to the winner in an educational scholarship. How about that?

Leahy: And we know Hillsdale has big programming and content and curriculum on the Constitution.

Leahy: Will you, Dr. O’Toole, will you be coming down to Nashville soon?

O’Toole: At some point, yes.

Leahy: Let me invite you to come into the studio. When are you coming here?

O’Toole: Well, no plans right now. I’m having a baby at the end of April.

Leahy: Take care of that first. (O’Toole chuckles) Thanks for joining us and good luck with your baby in April.

O’Toole: Thank you so much.