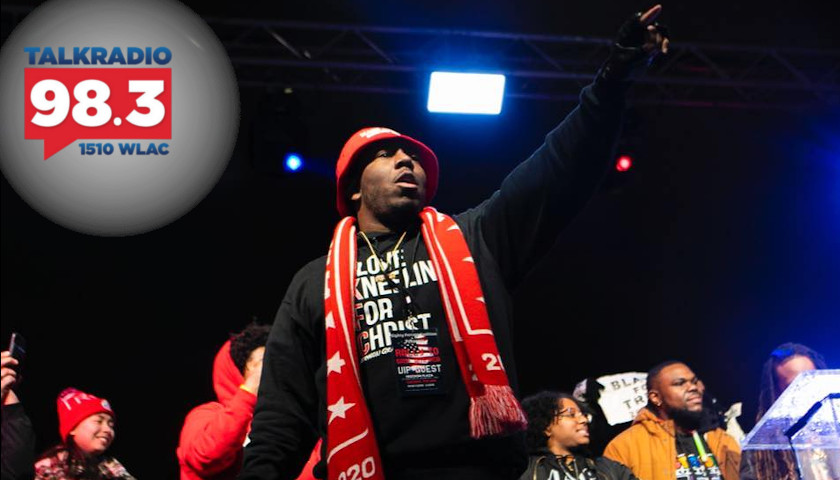 MAGA Rapper Bryson Gray Releases US Versus the Industry

Live from Music Row Thursday morning on The Tennessee Star Report with Michael Patrick Leahy – broadcast on Nashville’s Talk Radio 98.3 and 1510 WLAC weekdays from 5:00 a.m. to 8:00 a.m. – host Leahy welcomed MAGA Rapper Bryson Gray to talk about his new album release, US Versus the Industry.

Leahy: We are joined on a newsmaker line by our favorite MAGA rapper who lives in Murfreesboro, Tennessee, Bryson Gray! Good morning, Bryson.

Gray: Good morning. How are you, man? Thank you for having me on.

Leahy: You got another top rated video video song you’re releasing. What is it and how’s it doing?

Gray: My album called US Versus the Industry. It had a real hot start. We jumped up to the number one rap album on itunes within 24 hours. We were number three within all genres.

After like two days it slowed down a little bit now because it’s hard for us because we don’t have any resources, so it’s really just all organic. But it’s still doing great.

Leahy: US Versus the Industry. How many songs are on it and how do people get it?

Leahy: What are some of the tunes on it that I might recognize?

Simon: I’ll sing that tune.  This is Roger Simon.

Leahy: Roger Simon a big fan of yours as well.

Simon: A big fan and a very famous rapper. (Laughter)

Gray: Thank you so much.

Leahy: You’re talking about yourself as a rapper, right, Roger? (Gray bellows) Are you like the number one rapper in the country today or just the number one MAGA rapper? You’re a pretty big deal.

Gray: Yes, I would say as far as Christian conservative rappers, I’m probably the most popular. I’m not on the level of the demonic rappers yet. (Laughter)

Leahy: I don’t think you’re going to change your tune are you?

Simon: Would you call Kid Rock really a rapper or not?

Gray: I call him a rocker. I call Kid Rocker a rocker.

Leahy: Kid Rock rocker. Have you met Kid Rock, by the way?

Gray: No, I have never met him.

Leahy: I’m told he lives in Nashville. There was a rumor that he was considering running for the Fifth Congressional District. (Laughter)

Simon: I’d vote for him.

Leahy: But politics aside, tell us what you’ve done now, when did you release this album? How long ago?

Leahy: It’s almost like six days or something. We are on the cutting edge of entertainment news here. Tell us what you do. Do you go and do performances? How do you promote your music, Bryson?

Gray: Like I said, as an independent artist with no real resources, because the type of music I make, I pretty much just post it and try to get as many people to share it as possible and post it on my pages. That’s pretty much all we got.

Leahy: Do you have concerts or anything like that or do you just produce the songs and put them out?

Gray: So you got the videos, you got the YouTube. I do things like contact you guys and thank you for so much for bringing me on. But outside that I’m trying to set up concerts. It’s even hard to do that in the current state.

Leahy: With the COVID stuff and all that.

Gray: Brysongraymusic.com. I think we have like 50 signed copies left.

Simon: Maybe you should get in contact with Kid Rock and do a set at his club. And that would probably bring down a lot of people.

Gray: That sounds like a plan. I’m down. I’ll have to find a way.

Leahy: We have another idea for collaboration. Have you ever met John Rich?

Gray: No, but I have talked to him on Twitter before.

Leahy: Oh, you have? So he was the featured entertainer along with Larry Gatlin at the event Carol Swain did here about education a couple of weeks ago. I was the master of ceremonies there.

John Rich is a great guy and he’s got a lot of musical cooperation that he does. He did that great song with Mike Rowe bout Santa Claus Christmas. It did very well. We’ll reach out to John Rich on your behalf.

Leahy: Something could happen there.

Simon: He’s also got a club.

Leahy: He’s got a club and he’s a great guy. I literally was watching him the other night on his program on Fox Nation and he’s really good. I think maybe you’d be a great guest there.

Tell us a little bit, Bryson, you are a recent arrival in Tennessee, although I don’t think you would necessarily be a subject for Roger Simon’s new book, The Southbound Train because you came from North Carolina. You must have come on a westbound train. Is that right? (Simon chuckles)

Gray: It was getting too blue for me and I said, listen, I am out of here. And Tennessee seemed like the safest bet, even though a lot of people are starting to move here also now. But I think Tennessee will be the last to get the big ship of liberals.

Leahy: I don’t disagree. But tell me why you think that?

Gray: Because I think a lot of people choose Florida and Texas first. And I chose Tennessee because coming down here there is more so the culture. The culture in Florida and like most places, is very liberal.

Even when you go to Nashville, the culture is still more conservative than all these other big cities. And I like Texas. I like Texas, but people don’t realize that was a liberal place like 30 years ago.

Leahy: That’s a very interesting point. And by the way, Roger, this would be an excellent opportunity to plug your new book, The Southbound Train. Roger, why don’t you tell Bryson how he and other listeners can tell their stories about why they came to Tennessee.

Simon: Yes. Bryson, by the way, I want to talk to you. I’m starting a book called The Southbound Train that comes from the lyrics of Wagon Wheel, if you remember. Anyway, it’s a book about people moving from blue states to red states. North Carolina is much bluer than Tennessee.

Leahy: Now, Bryson, would you like some breaking news?

Leahy: We have a gig for you. One of our listeners wants to invite you to perform at a gig. Are you ready?

Leahy: It’s a group called Williamson Families in Franklin. They have an event on March 8 and they want to invite you to perform there.

Gray: Of course, if I’m in town, I have to check my schedule.

Leahy: Guess who’s on the lineup there that night?

Leahy: John Rich is also on the lineup that night.

Gray: Ohhh, that would be so awesome.

Simon: I’ll be there for sure.

Simon: He gets a percentage for that?

Gray: Thank you so much, man. That’s amazing.