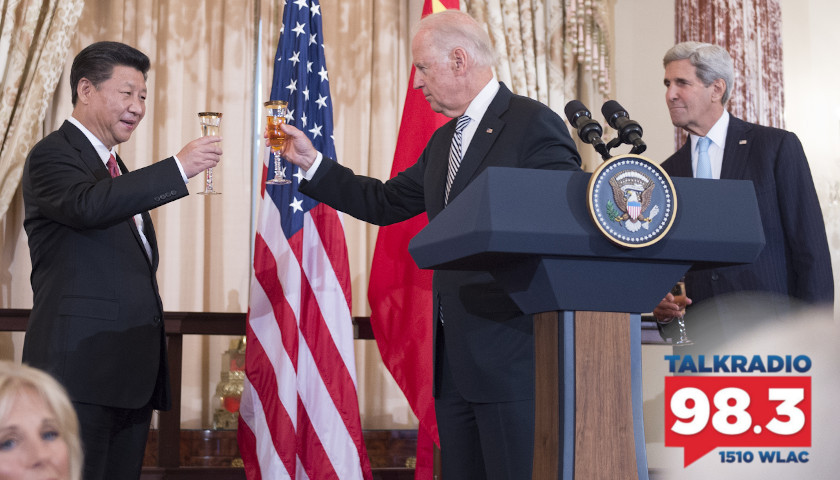 Live from Music Row Thursday morning on The Tennessee Star Report with Michael Patrick Leahy – broadcast on Nashville’s Talk Radio 98.3 and 1510 WLAC weekdays from 5:00 a.m. to 8:00 a.m. – guest host Christina Botteri welcomed Fox Business contributor and Wall Street expert, Liz Peek, on the newsmakers line to discuss the compromising position of Joe Biden and why he will not pushback on China.

Botteri: And on the newsmaker line with us is the one and only Liz Peek. Liz Peek is a Fox News contributor and former partner at the firm Wertheim and Company, and she’s a former columnist for The Fiscal Times, writes for The Hill, and contributes frequently to Fox News, The New York Sun, and other publications.

You can visit her online at lizpeek.com. You can follow her on Twitter, which I highly recommend @lizpeek. And Liz, you’re here to talk with us about Joe Biden’s China problem.

Peek: (Chuckles) Good morning. Well, he has one. And the problem for Joe Biden is that Americans are increasingly questioning where the Wuhan virus came from. And the mounting evidence is that, in fact, it was created in a lab not originally coming from bats or any kind of intermediary animal.

The Chinese have tested tens of thousands of animals and discovered no such virus exists that they can find it. And even some of our own experts with air quotes, like Anthony Fauci appear to think, yes, this is possible that this came from the lab.

So the question is, what is Joe Biden going to do about it? And I think voters are going to want him to stand up to China on this and other issues, by the way, too. And he can’t. He can’t because he needs China’s help in selling our own or I should say Joe Biden’s own very radical climate agenda to American voters.

Joe Biden basically wants to take offline or incredibly efficient low-cost energy structure and replace it with higher-cost renewables. That will mean everyone’s electricity prices go up and further damage our competitiveness with overseas companies.

And the only way he can even possibly argue that this makes sense is if China does the same thing. China has not done the same thing. They’ve made only the vaguest promises. And of course, China’s emissions are twice those of the U.S. growing very rapidly, whereas ours have not been increasing.

It is completely a fool’s mission to undermine one of the core geopolitical strengths of the United States, such as our incredibly abundant fossil fuel reserves without China making some sort of concession.

And Xi Jinping knows this. He knows this is a very fraught issue for a lot of voters in the U.S. Joe Biden needs his help in terms of Xi Jinping also making climate promises, which so far he’s not done. He also needs Xi Jinping to make sure that we can get back in the Iran nuclear deal.

Right now that’s unacceptable because the Iranians refused to make any changes to the original program. And Xi Jinping has sided with the Mullas and saying, no, no, their original deal is good enough.

Biden, really, if this is the cornerstone of his foreign policy, which it appears to be unbelievable, he needs Xi Jinping to work with him and get this done. But the most important thing probably is that the Chinese may have compromising information about the Biden family.

We know that there are a lot of financial transactions that included obviously Hunter Biden, but also possibly his father, which originated during the time he was vice president and the point person for Obama in China.

A Senate committee basically concluded that, in fact, the Biden’s might have extortion vulnerabilities because of what went on in not just China, but also other countries. And the FBI, let us not forget, is investigating Hunter’s activities for possible money laundering.

It’s a criminal investigation, again, involving his transactions in China. So I think the Chinese government is absolutely ruthless. They will not at all hesitate to leak out damaging information about the Biden family unless Joe Biden kind of plays along.

And I think this was true when Joe Biden was elected as true. Today, the media and social media giants covered it up and stood in the way of American voters finding out about these compromising situations in China.

Now, pretty much it’s gotten out there and I think this is potentially a huge problem for Joe Biden but also, let’s face it, for the United States.

Botteri: Yeah. You’re not kidding. That’s quite a lot to take in. I think the question that a lot of people have is, what can Joe Biden do? What can he get? What can he offer? What does he have that China wants? Is it to stand aside and let China just take over Africa in its entirety?

Is it to allow no change in their emissions standards? I guess, to their credit, China hasn’t made any promises that they’re not fulfilling. They’ve basically said, what? The U.S. cut our emissions? No, thanks. (Peek chuckles) No, we’re not doing that. But even if they did, would they?

Obviously, they’ve made enormous progress towards that end. But Trump was a hiccup. He was a speed bump. I think President Trump did our nation a great service by calling out China’s truly criminal activities, stealing billions, hundreds of billions of dollars, according to some government sources, in our intellectual property, cheating the United States on trade, but also the world on trade.

China is a bad actor. It has never gone along with the strictures of belonging to something like the World Health Organization, as we have seen recently, or the World Trade Organization.

They cheat, they lie. They do whatever is necessary to further their own cause. We had a President, briefly who put America first. There’s no question that Xi Jinping puts China first.

Okay, that’s acceptable as long as he behaves within the norms of conventional international behavior. But he does not. And I think the answer to your question is he wants Joe Biden basically to ignore what’s going on in China in specific about the virus.

None of those things is going to get anywhere because the Chinese are basically not allowing their scientists to talk to the Western investigators. They’re not allowing those investigators into the lab to look at their research materials for their procedures.

Little by little, though, it is coming out that this is probably the origins of the virus. And I think what they’re going to demand is that basically, the West do nothing about it. You’d be interested to know, maybe, and your listeners might be interested to know that Australia, to their credit, actually did challenge the origin theory a year ago about where this virus came from.

Australia really demanded answers and was very aggressive about it. In response, China has unleashed an unbelievable trade war against Australia, for which about 20 percent of their exports go to China.

China and Australia have very big trading relationships. China has blocked or sanctioned or now prohibited the importing from Australia dozens of goods. That’s how seriously they are on the attack on this and how aggressive they will be.

What we need to do and what Biden may or may not be able to do is really get the entire EU block and the UK organized with us demanding answers from China and putting out their potential penalties.

Whether it’s trade sanctions or whatever that result if, in fact, China does not cooperate. I don’t think Biden will do that. I don’t think he has the forcefulness to do that. And as I say, he has seriously serious vulnerabilities if he does.

Botteri: You mentioned the pretend investigation, and I just can’t help but wonder are there any real investigations in the Biden administration right now having to do with the serious issues? Are any of the investigations real?

And then something else that kind of struck me. I’m not the person who came up with this, but I think it’s a very provoking thought and one that we should all remember. And it is this. In China, globalism is nationalism.

And sadly, because we have this climate-industrial complex now in the U.S. and so little real analysis of the costs of the kind of measures that Joe Biden wants to put through. There is nothing that Xi Jinping would like better than to have America try to cut our emissions in half, as Joe Biden has promised.

Look at California. California is a state which has embraced renewables with great enthusiasm, and their electricity costs are nearly twice that of the rest of the country. Their gasoline costs are probably 30 percent.

Botteri: And growing. Liz Peek, thank you so much for joining us today. I hope you come back again soon.

Botteri: You always a delight. Thank you so much.