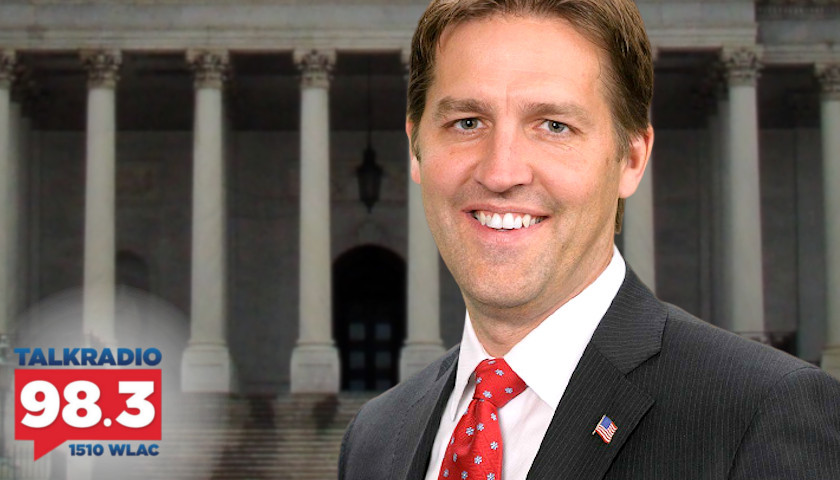 Live from Music Row Wednesday morning on The Tennessee Star Report with Michael Patrick Leahy – broadcast on Nashville’s Talk Radio 98.3 and 1510 WLAC weekdays from 5:00 a.m. to 8:00 a.m. – host Leahy welcomed the original all-star panelist Crom Carmichael to the studio who referenced a recent piece by Republican Senator Ben Sasse and the intellectual property of vaccines.

Leahy: We are joined in studio, as we almost always are, at this time of day, every Monday, Wednesday, and Friday by the original all-star panelist Crom Carmichael. Crom, good morning.

Leahy: We had Lenny Magill on yesterday. He was great.

Carmichael: Oh. What a blast. I missed that. He’s so much fun.

Leahy: Just so everybody knows, we went to the grand opening of the Nashville Glock Store on Saturday at 1930 Airlane Drive. Still open. And they gave us a gun, a customized Tennessee Star gun, a Glock 17. Even though we didn’t have a formal competition, Crom, you were a better shot than me.

So you are going to be the owner of that gun. I’m ordering and purchasing myself a separate gun, probably a Glock 19. I’ll go and look at it. But we’ll put the Tennessee Star logo on that one as well. Now, the Glock 17 in the Glock 19 what is the difference between the two?

Leahy: I don’t really know, except I’m told that a Glock 17 has a longer barrel.

Carmichael: You told me that the other day.

Leahy: Yeah, I think so. But we’ll see. I’m gonna go there and it’s just sort of fun. And then you and I will be competing occasionally back and forth just to see. Because I am a competitive person.

Leahy: Well, there you go. It just sticks in my brain that you’re better than me Crom so I’ve got to work on it.

Carmichael: It might have just been that one day.

Leahy: I don’t think so. We know you are better but I got to work on it anyway. I like talking about that because it’s fun. They’re fun people. And the energy over there, the interest in understanding how to use guns and Second Amendment rights. It’s very very strong.

Carmichael: Their training is second to none, which means it’s the best.

Leahy: It’s the best. Crom, one thing that’s always so interesting dealing with you, is that you have such an active mind. You read so much and you really examine issues. Every time you come in, you tell me, well, I was reading this. I was reading that. So you’re a voracious reader.

Carmichael: Voracious. Word of the day.

Carmichael: There are two articles that I want to talk about during this segment that are really kind of interesting. One is Ben Sasse who is the Senator from Nebraska who sometimes will go off half-cocked and say things that just make no sense at all.

Carmichael: He’s an odd duck. That’s a great way to put it. And sometimes he says something that’s profound in a positive way. And then other times he will say something that you just scratch your head and say, why on earth would you say that?

Carmichael: Except, in this case, he actually wrote an article, which means he had plenty of time to think about it, which even makes it a bigger head-scratcher. But Here’s the title of the article. The U.S. Can Stop the Pandemic Encounter China.

And he’s calling on the U.S. under Biden, which is almost hysterical, to vaccinate a billion people around the world by Thanksgiving.

Leahy: What? This is Ben Sasse the Republican?

Carmichael: Now, here’s the problem. The problem with that, first of all, manufacturing vaccines is not something you go down to your corner drugstore and ask them to whip up a vaccine. It is not easy to do the materials that go into vaccines.

I’m not going to say that you can’t find them because you certainly can. But making vaccines is not easy. And so the process itself, you can’t just job that out. You can’t just hire subcontractors to go make vaccines. That’s number one.

Number 2, there’s the know-how to making vaccines and the know-how to making a vaccine is something that falls under the category of either corporate secrets or IP intellectual property. And Ben Sasse while he acknowledges that what Biden is talking about doing of where they take away the intellectual property of big pharmaceutical companies in regard to the vaccine, he then essentially proceeds to just ignore what he acknowledges.

Leahy: This has all the earmarks of a disaster.

Carmichael: Well, it’s not possible is what I’m saying. If you try to set a goal that is completely unachievable and you do it because you would like to achieve it. It’s just a dumb idea. And it’s a dumb idea not because it wouldn’t be nice if it could be done.

But once you do give it away, then you’ve given away billions and tens of billions of dollars of value. And you’ve done it for no, particularly good reason because this would fail anyway. It’s kind of a shame to see a Republican almost like he’s whimsically sitting there having a cup of coffee in the morning saying, you know what?

I’ve got a great idea. Let me just snap my finger and we’ll have a billion people vaccinated by Thanksgiving. That’ll be the goal, and we’ll do it. This reminds me of Biden the other day saying that he has appointed somebody to review the global supply chain.

And that was all he said. I’m going to review the global supply chain. Of what? Everything. Biden makes many statements that are just ridiculous. But that one that even the press corps had to be laughing up their sleeves saying by God this guy is a fool. So that was kind of an issue.

Leahy: Let me just, please. One comment on Ben Sasse. He’s 45 years old, some younger guy. But I think this is an example of people that have spent too much time reading books and not doing things. He has a bachelor’s degree from Harvard, a Masters of Arts in Liberal studies.

Carmichael: Maybe that explains it.

Leahy: I think so.

Leahy: He has a Master of Arts in Liberal studies, no surprise from St. John’s, and a Ph.D. in history from Yale University. He worked in the George W. Bush administration as a policy guy. That means he snapped his fingers and made-up stuff.

Carmichael: That helps under explain it, too.

Leahy: He was the President of a small University, Midland University in Fremont, and was elected first in 2014. Reelected in 2020. He was one of seven Republican senators voting to convict Donald Trump of incitement of insurrection in the second trial. The guy has never had a job in his life. And you can tell there’s a flaw in his thinking. That’s his problem.

Carmichael: He’s a very bright guy, but he’s just simply an impractical guy. And he also apparently doesn’t know how to treat people equally. Because if he thinks that what Trump did on January sixth by giving a speech was inciting a riot, then he needs to learn how to apply the law equally to everybody.

But let me jump to another subject because it’s also kind of interesting. And this one has irony just written all over it. Bernie Sanders has come out and publicly stated that he will not support a tax increase of any kind if it includes doing away with the state and local tax limitations.

In the 2017 bill, what Trump and the Republicans passed, and I don’t think any Democrats voted for, but maybe a few did. Let’s just say it was the Trump bill. What Trump did was he cut taxes. But he also reduced a lot of the write-offs that people could have. And one of the write-offs that Trump and the Republicans did away with is being able to deduct your state and local taxes.

Leahy: Which is, in essence, a subsidy of high-income tax states. Blue states.

Carmichael: And it really helps the millionaires and the billionaires because that is where state and local taxes hit the hardest. So Trump did away with that deduction. And Bernie Sanders says he will not vote for a bill that puts that reduction back in.

The Democrats from New York and California say they won’t vote for a bill that doesn’t include it. There are other Democratic Senators but Bernie now has come out on that one particular issue. So I think that Biden’s tax increase bill is dead water.

Leahy: And it’s called state and local taxes or SALT. And so Bernie Sanders is…

Carmichael: Thanks for the setup. (Laughter)