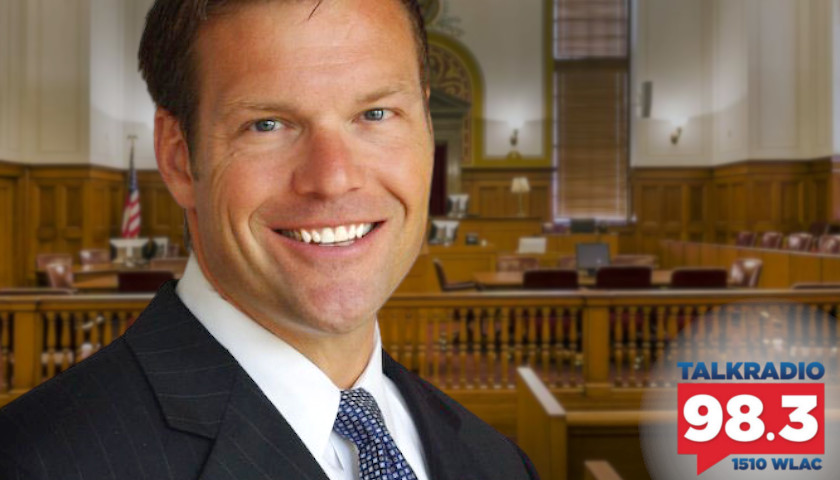 Live from Music Row Friday morning on The Tennessee Star Report with Michael Patrick Leahy – broadcast on Nashville’s Talk Radio 98.3 and 1510 WLAC weekdays from 5:00 a.m. to 8:00 a.m. – host Leahy welcomed former Kansas Secretary of State Kris Kobach to the newsmakers line to describe the first-ever lawsuit of its kind he is leading against the Biden administration by Texas sheriffs and ICE officials.

Kobach: Great to be back with you.

Leahy: Kris, last time we talked was at the Breitbart Embassy where Steve Bannon lives. You had a little event there. We went and talked and had a great time. And hats off to you for continuing to fight the good fight.

Kobach: Well, thank you. It’s a really important punch we threw in the state yesterday.

Leahy: Tell us about the lawsuit, who you represent, and what you’re arguing about.

Kobach: I represent a group of Texas sheriffs as well as an association of ICE officers. And this is the first time ever that local sheriffs have teamed up with federal law enforcement officers to sue a President and his Department of Homeland Security.

And the reason that they are suing is that something extraordinary is going on. On February 18 a memorandum was issued within ICE, where basically, Secretary Alejandro Mayorkas ahead of DHS, told ICE officers, you may no longer deport basically everybody except for a narrow category of terrorists and aggravated felons.

You may not deport them unless you get special approval from your superiors. And it turned out that this approval was virtually never granted. And that violates three different federal statutes because back in the 90s Congress said, we’re sick of this catch and release.

And so basically, the Biden administration is ordering ICE officers to break the law. And it’s a pretty shocking state of affairs when it now takes a lawsuit for law enforcement officers to be permitted to follow the law.

But that’s where we are. And thankfully, the ICE officers and the sheriffs have stepped forward to do this.

Leahy: Kris, Crom Carmichael is in studio with me today, and he has a question for you.

Carmichael: Mayorkas is telling ICE agents to actually break the law. So there’s not a prosecutorial discretion type of thing here. He’s actually telling them, do not follow the law. My question is in a subsequent administration, is Mayorkis himself, can he be criminally prosecuted?

Kobach: Well, that’s a good question. I think probably the answer is no, just because you have sovereign immunity for people acting in their official capacity.

Carmichael: Even if they break the law?

Kobach: Mayorkis would say, oh, well, these lawyers at the Department of Homeland Security told me they drafted this well enough that it doesn’t really violate federal law. And that’s the thing.

I doubt that you would be able to prosecute the leadership because, of course, the memorandum in itself doesn’t use the words we are ordering ourselves, break the law.

It’s crafted in legalese and says, well, if you wish to deport anyone in these non-priority categories, you must seek pre-approval. And we’ve since learned that pre-approval basically never granted. Only in very rare cases.

Leahy: Can I ask you this question.

Leahy: I’m not an attorney. I don’t play one on the radio. But is this a memo by Homeland Security’s Secretary Alejandro Mayorkas, an impeachable offense?

Kobach: You know, that’s a good question. Of course, the high crimes and misdemeanor words in the Constitution have been debated for centuries. I think at some point it has to be whether or not is it a crime?

And the answer to that is more complicated. It may not be, but it is. Even if it’s not an impeachable offense, it is so outrageous and it’s unconstitutional. We bring a separate claim, in addition to the federal statutes that are clearly being violated here, we also point out that it violates Article Two of the Constitution, which says that the executive shall take care to faithfully execute the loss.

There’s no question that’s being violated. So you have an order being given by the DHS Secretary, in effect by the whole Biden administration to not enforce the law, and indeed, to tell ICE officers themselves to break the law. Clearly, that’s not faithfully executing the law as our Constitution requires.

And interestingly, those words in the Constitution have very rarely been litigated. The Supreme Court has rarely spoken about them. It would be wonderful if this case did end up in the Supreme Court and if we finally got the court to say something about what that means.

Carmichael: What is the time frame? Because you’ve got people who are now being allowed to stay in this country, who are clearly dangerous and will clearly cause harm to Americans.

What is the time frame that this will wind its way through the courts and where the ICE agents will then be free under the law to do what they are legally required to do?

Kobach: That’s a great question. Obviously, as you and your listeners know, cases can take years. But one step we can and we’ll be taking very soon here is filing a motion for a preliminary injunction which asks the judge to say, look at this case.

There’s a good chance we’re going to win, we ICE officers and sheriffs. Please enjoin the administration from enforcing this policy anymore as this case is being litigated. Hopefully, we’ll prevail an emotion fulfill under injunction. We might get released within the next few weeks.

Carmichael: And then if you were to get that, then the ICE agents would be able regardless of the memo, we would be able to do their job.

Kobach: Yes, that’s exactly right. Let me add one thing here. I think the liberals or the people who support the Biden administration might be looking for some excuse and they might be thinking, oh, you know what? This is just a priority memo.

This is just the Biden administration saying we want you to focus on the high-priority criminals. That’s not what this is. This is a memo that says you shall turn loose onto the streets and people who commit all sorts of crimes.

And I just want to give you some examples which we site in our case. These are coming from the ICE officers. They have been forced to turn loose when they could have taken custody and would have deported them prior to this memo.

Rape of a child, aggravated sexual assault on a child, aggravated assault with a deadly weapon, larceny, burglary, domestic violence, carrying a prohibited weapon, possession of drugs, resisting a law enforcement officer, and driving under the influence.

The list goes on and on and on. These are not minor crimes. These are illegal aliens who committed these crimes and now are being released onto the streets because of this ICE memo.

So really it would have to have been brought in one of those two districts. But you’re right. The judges here can see the impact of illegal immigration. They can see the crisis firsthand. And so I think that may have some effect.

Leahy: Yes, we certainly do.

Kobach: We hope that the judge here, we’ll see that this is a clear violation of the law.

Kobach: Well, thanks for those kind words. I appreciate it.

Leahy: Kris Kobach, thanks very much, and come back again and tell us how this case proceeds.

Kobach: Will do. Take care.