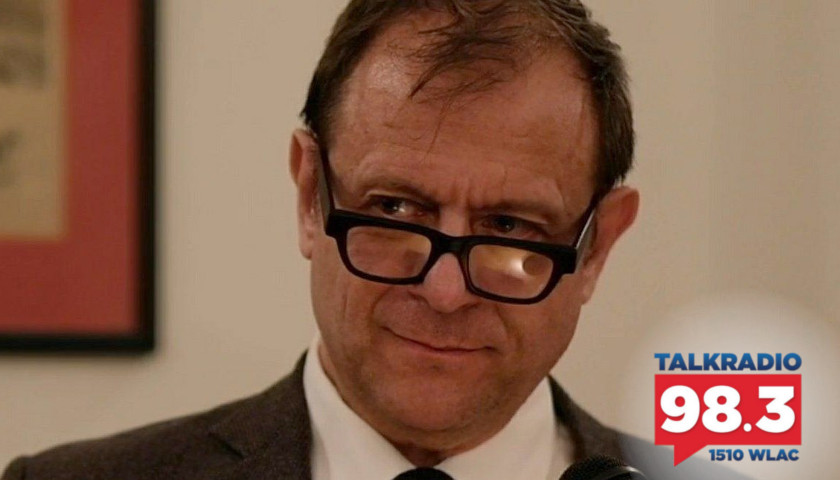 Live from Music Row Friday morning on The Tennessee Star Report with Michael Patrick Leahy – broadcast on Nashville’s Talk Radio 98.3 and 1510 WLAC weekdays from 5:00 a.m. to 8:00 a.m. –  host Leahy welcomed Dr. Michael Rectenwald to the newsmakers line who is the author of 11 books, including Thought Criminal and Google Archipelago outlines how corporations are positioning themselves in ideological favor due to China’s influence in state economics in order to survive.

Leahy: We are joined by our good friend again, former Professor at NYU Michael Rectenwald who is actually an academic who thinks independently and has written some great books published by Nashville’s own New English Review Press. Professor Rectenwald welcome again back to The Tennessee Star Report.

Rectenwald: Hi, Michael. Thanks for having me.

Leahy: So woke capitalism. You warned us about this for some time. We’ve seen it now going crazy with the actions by Major League Baseball Commissioner Rob Manfred. He is a Harvard Law School graduate with no common sense that has decided to punish the citizens of Georgia because their legislature passed common sense, election integrity reform laws. The way to punish them? Move the All-Star Game from the Truist Park in Cobb County Metro Atlanta which is 50 percent black to 9 percent Black in Denver, Colorado, home of the Colorado Rockies.

Here’s what bothers me, Professor Rectenwald, to me that these four 500 executives and Major League Baseball Commissioner talking about the head of Delta Airlines ahead of Coca-Cola, they aren’t even looking at the facts of these bills. They are just kind of responding to political pressure and then trying to force the duly elected state legislatures in these sovereign states to change their policies. What do you make of all this?

Rectenwald: These corporations are actually, they’re not even caving to pressure they are the pressure at this point. And ironically, the laws that they’re moving the game over are more restrictive in Colorado than they are in Georgia. And furthermore, how outrageous it is that Major League Baseball is willing to play games in China where China keeps people in concentration camps and forced labor and brainwashing techniques are underway constantly. So they’re complete hypocrites. It’s outrageous. And they’re completely not paying attention to reality in terms of where the real oppression is taking place.

Leahy: You said something very important there. They’re not paying attention to reality. They’re not recognizing reality. How is it that leaders of many Fortune 500 companies and the commissioner of baseball are so disconnected from reality? How did that happen?

Rectenwald: Ideology, ideology creates a worldview that blocks out a lot of information and a lot of facts. It just shapes the world view, such that you see the world in a certain restricted way, and you don’t have a wider lens to be able to see other factors of reality. They’re under this word ideology, which is a form of socialism and socialist ideology and that’s what they’re looking at the world through this lens, which makes invisible certain elements that are there.

Leahy: Of the leadership, the top management of Fortune 500 companies in America today, what would be your guess as to the percentage of them that have this woke ideology?

Rectenwald: I’m going to say it’s about 95 to 99 percent at this point.

Leahy: I think you’re right. If we went back 20 years ago, what would that number have been?

Rectenwald: Probably zero to one.

Rectenwald: Right. A huge, massive shift that’s taking place ideologically in this country from what I would call American values. I don’t know what to say, to socialist ideology. Really it’s an incredible ideological paradigm shift that’s taken place.

Leahy: How did that happen?

Rectenwald: What’s happening is we’ve had tremendous pressure through academia and this ongoing indoctrination and academia which I’d say it has been going on for 30 years or 50 years even. But more intensely in the last 10 to 20 years. And I think also, frankly, I’m not sure to the extent to which the Chinese Communist Party is behind some of this.

And in other words, the pressure they’re exerting ideologically thanks to their foothold in our economy. So that’s what they do. They ingratiate everyone to them by virtue of getting an economic stronghold, and then they start to perpetuate their ideology on the rest of the world. This is what they’re doing with their One Belt One Road Initiative. And they’re doing it in the United States vis a vis economic ties.

Leahy: Your suspicion is one I share. Getting the evidence for it, of course, will take a little bit of time. But I share that suspicion about the influence of the Chinese Communist Party on the thoughts of leadership and America’s Fortune 500 companies. What is to be done? How do we move that number from 95 to 99 percent woke among America’s Fortune 500 executives back down towards something manageable?

Rectenwald: I tell you what, I’m not sure it will work through some sort of reverse ideological indoctrination. What’s going to happen is the economy is going to suffer tremendously because this is all based on bad economics first of all. And we’re going to undergo this continues some serious cataclysms economically, and this could wake people up. Sometimes it takes some sort of a catastrophe for people to wake up because they can’t see outside of their blinders. So I’m afraid if it’s not going to be through reverse engineering, the ideological indoctrination, it may have to come through some economic problems.

Leahy: So what would be the economic problems resulting from the woke ideology of Fortune 500 executives?

Rectenwald: Well, what it is is it is a state-enforced. What they’re doing is they’re ingratiating themselves to the state because they believe the state will be the main means by which they’re going to make it economically, only those favored corporations. So as long as the state is dishing out all the money, which is what’s happening, then you’re going to have these companies beholden to the state in terms of their beliefs so that they’re in accord with what’s happening. And since we have a fully Democratic-run government, this is what afoot.

They’re providing all this money by printing it endlessly. What will happen is we’ll get into severe inflation at some point. And, you know, the Chinese economy is only functioning because we had a U.S. market to buy their goods. And if they make this such that so this could never really work long term. You can’t have the state being the main source of economic growth. It won’t work. What will happen is the economy will crash, and then you have to see that the market itself has to be the main driver. And that’s what we’re going to get into.

Leahy: When you see the economy crash, though, won’t the Fortune 500 companies be in a stronger position than, say, mid-size companies and small businesses?

Rectenwald: Absolutely. And that’s part of the whole, unfortunately, I don’t want to call the plan, but that’s the setup. This favors large-scale corporations over small businesses that are being as we’ve seen through the Coronavirus response have been obliterated. We’ve lost maybe 50 percent of small businesses over this crisis.

And it’s favoring these large corporations. And unfortunately, they may see the solution as more bailouts from the government. But at some point, this money is not going to mean anything, because if you keep printing money, the greater the supply, the cheaper it is, the less it’s worth. And so likewise, it’s inflationary. There’s no way around it.

Leahy: Professor Rectenwald, what you’re saying makes common sense. Last question for you. I appreciate your time this morning. How has your message been received?

Rectenwald: Well, outside of I would say, alternate type sources of news it’s not being received at all. I can’t get it across because you can’t break into the mainstream legacy media with this kind of message. They’re all down with this new monetary policy that you can just print money endlessly and suppose that things are going to work out when the facts of economics just tell you that’s not true and ideologically. You just can’t get across because they just peg you as some sort of a right-wing nut case instead of paying attention to what you’re saying. We’re in precarious conditions, and they’re on shaky ground.

Leahy: Well, our listeners, I can tell you this Professor Rectenwald are glad to hear your message and come back again and give more details on it as this continues. Thanks for joining us today.

Rectenwald: Thanks for having me. My pleasure.