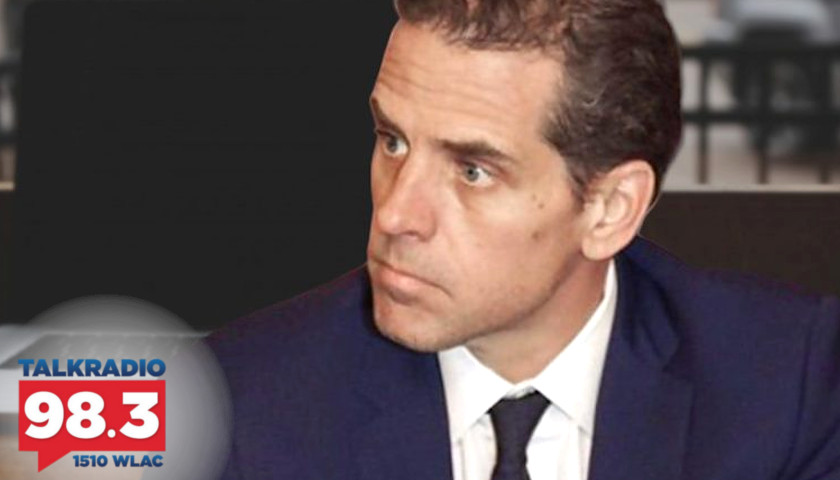 Live from Music Row Tuesday morning on The Tennessee Star Report with Michael Patrick Leahy – broadcast on Nashville’s Talk Radio 98.3 and 1510 WLAC weekdays from 5:00 a.m. to 8:00 a.m. – host Leahy welcomed Senior Editor-At-Large at The Epoch Times Roger Simon and Mayor Andy Ogles to the studio and welcomed Neil McCabe to the newsmakers line to discuss the up and coming Hunter Biden PowerPoint and the Chinese Communist strategy of loan and debt in their strategical takeover of the global economy.

Leahy: In studio a good friend, Roger Simon, the newest all-star panelist and the Senior Editor-at-Large at The Epoch Times, Andy Ogles the mayor of Maury County. We’ve been talking about a lot of things having a party.

We’ll get to our good friend and Washington correspondent Neil McCabe in just a minute. I want to set this up, Roger, for you with the following. Os Guinness is a great writer. He’s written A Suicide of the West.

He’s a Christian philosopher who has an understanding of politics. He’s the guy behind the concept that the United States was founded on the Golden Triangle of Freedom. And in essence, it says, freedom requires virtue.

Virtue requires faith. Faith, in turn, requires freedom. We’re in trouble in all those areas right now in the United States. And his argument is we are suffering from the rise of the left. He was a kid, he is 70 years old and he was born in China.

His parents were medical missionaries. He’s English. He was there in 1949 when the long March began and with the rise of Communist China, his argument is that here in the United States, we’ve seen a long March of Marxism through the institutions. And he thinks we got to fix that. Roger, you had some thoughts about that. Will we be able to fix it?

Simon: I have a piece coming out later today on The Epoch Times, in which I essentially say that what we used to call the Silent Majority is about to go un-silent. And the reason that’s happening is that the moms are finally getting upset, really upset because of the infiltration of Marxism into the educational system in our country.

It may be almost a biological thing of don’t fool with our children. Do what you want but you start to fool with our kids. And it’s over. And we’re going to say something. And I think in a hard way, we got three guys sitting here at the table but the women are going to lead the way in this a bit. I mean, there are a lot of men speaking out, too, but, I mean…

Leahy: The moms are not happy.

Simon: They’re not happy. And there’s a good reason not to be happy.

Ogles: Anecdotally just the other night in Williamson County, you have Moms for Liberty through together an event. And basically, in a two-week, 16 day time period, you had almost 400 upset mothers show up at this event and recoiling against the school system in Williamson County.

And I’ve been traveling to the state here aggressively these last few weeks. People will book me last minute, seven days out. And on a Tuesday night in Lenoir City, and you have standing room, only 120 people show up because they are frustrated. They are angry. And I can only speak for Tennessee. But there’s the potential for a wave election to come up.

Leahy: I want to bring in our good friend, the Washington Correspondent for the Star News Network, and The Tennessee Star, Neil McCabe. Neil had a breaking, exclusive story about sort of institutional hypocrisy having to do with Hunter Biden.

Leahy: Yeah, no kidding. I know what a shock. Neil McCabe, welcome to The Tennessee Star Report. You’re early this week, but it’s an important story, and we wanted to get you in early and you’ll be on tomorrow as well. But tell us about your breaking story.

McCabe: What’s happening is Fisher who was for a while he was the producer of Steve Bannon’s War Room-Pandemic, and now he’s a senior staffer on Capitol Hill. But he’s also the vice president of New York City-New York Young Republicans Club, which is founded in 1911.

It’s one of the oldest Republican clubs in the country. And he will be giving tonight a full-frontal expose of the Hunter Biden laptop with PowerPoint slides that aren’t like your usual PowerPoint slide presentations. (Leahy laughs)

People complain about your death by PowerPoint. I think people are going to be focused on what’s going on in this PowerPoint slide.

Leahy: Mayor of Maury County Andy Ogles has a question for you.

Ogles: When you say Hunter Biden in full frontal in the same sentence, it makes me nervous. (Laughter)

Simon: Are they going to put this online, by the way?

McCabe: I don’t know if it’s going to be online, but it’s actually going to be a fundraiser for the New York Republicans Club at their clubhouse in Manhattan. And Vish was one of the first guys who did the deep dive into the hard drive because he was working for Bannon when Rudy Giuliani brought it to Bannon.

And Jack Maxey, who for a long time was Bannon’s co-host on War Room. So Bish and Jack Maxey really the ones who went into the folders and all the different files, and they’re still digging through it. But rarely what comes out is there are policy problems, because to what degree was U.S. policy being crafted to profit the Biden family?

McCabe: (Laughs) Yeah, it’s scary and it’s sad. And they’ll be going through some of the crazy relationships that Hunter had. And really, there’s the business with the Chinese. I talked to Vish, of course, for my Tennessee Star article and he really made the point that Ukraine was almost a distraction, that it could have been the Chinese who actually set him up in Ukraine. But China was where the real money was, and that’s where the real sort of policy perversions were.

Leahy: And then also related to that, I don’t know if you saw this story. Alex Marlow, editor in chief of Breitbart, has a new book out called Breaking the News. One of the revelations is that while his father was Vice President and subsequently Hunter Biden flew out of Andrews Air Force Base  23 times as a private citizen.

McCabe: Hunter was sort of operating in that sort of dual space where he’s almost like an emissary from his father. And we’ve seen other family members do that. Usually, there are times when even George W. Bush was the one who told Sununu to resign as his father’s chief of staff sort of in the shadows kind of operator.

But Hunter Biden was just about the money, and he was really going after he was going around the world trying to vie for the Chinese, Mexican oil fields, Romanian oil fields. It’s really outrageous.

Simon: That’s the method of the Chinese Communist Party who is no longer really strictly Communist in the old sense. They’re more like powerful oligarchs trying to buy the world with their belt and road system. And they’re doing a good job because we’re all suckers for it.

McCabe: They’re buying up all the coal and all the oil, and then they’re telling us to have solar cars. (Laughter)

Leahy: Victor Davis Hanson had a great commentary about that we publish at The Tennessee Star. Basically, they’re really about the elite, shall we say, the oligarchs, they want to basically make a lot of money for themselves and do whatever they want. But tell you that you’ve got to have solar cars and do all that kind of craziness.

Simon: Or you take their ports, which is what are the things they are really trying to do.

Leahy: It’s a little bit like the old mercantilism of the 16th and 17th centuries that America revolted against.