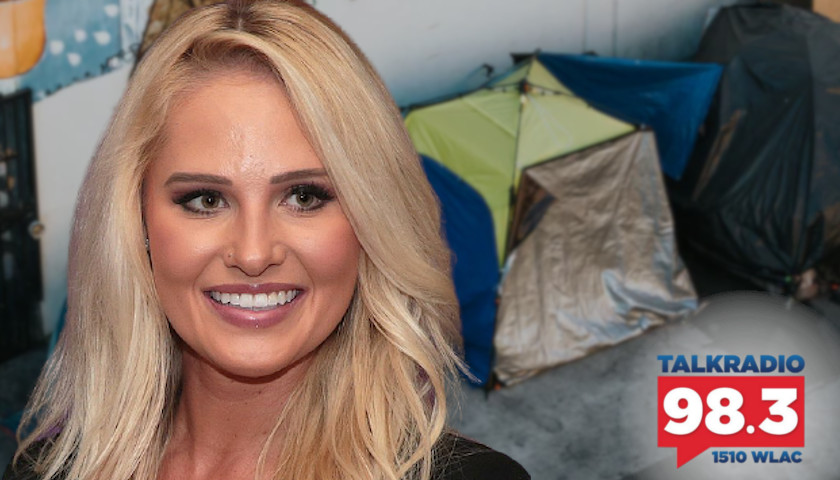 Botteri: And on the line with us right now is the one and only Tomi Lahren. Tomi, thank you so much for joining us this morning. How are you?

Botteri: (Laughs) Oh, no! So what you’re saying is you are wearing a mask? (Laughter)

Lahren: I refuse to do that. I don’t know if anybody follows me on Twitter or on Instagram, but I think that they are well aware that I am unmasked and at full capacity at one of those things.

So I have to say, maybe a little bit of Tennessee is rubbing off on the Golden State. I love to see it.

Botteri: Oh, that is great news. I’m serious, all jokes aside, that is great news, Tomi. Thank you for sharing that. That kind of makes me glad, because it is a beautiful place, Santa Monica and all of California, for that matter, it really is.

And to just be all hold up. Can we just talk about it for one little second, what a weird sensation it is to wear these dumb masks? Because when you’re at the airport, that’s like a whole other thing.

When you’re on an airplane, but your vision is cut off, your breathing is off. Just everything about it is the worst. I mean, I suppose there are worse things in the world, but not many.

Lahren: (Chuckles) I’ve been calling it a face diaper for about a year-and-a-half-now. But here’s the thing. And this is what I tell people, and I understand it. And this has long been my approach to it.

If a private business or an employer wants to require masks, as we know, I’m all about that. They have the right to do that, and we have the right, not to patronize those establishments. So I fully understand that their right to do it.

But when the government and as we had, as you guys know, in Nashville, when we have the government putting a mask mandate in place, that’s where I draw the line. And I for a long time said this, even when we were in Nashville under that mask mandate and when I would travel outside of the airport, I would say, listen, I’m not going to wear a mask.

If someone wants to approach me and tell me to wear a mask will have a little discussion. But it’s funny when you go unmasked, it’s like people look at you and now they finally feel like they cannot wear a mask because they were just waiting for that one person to be the first one to say, I choose freedom.

And they’ll look at you in relief. And they’ll say, oh, thank goodness. I’m taking my mask off, too. And that’s, my friends, is how we start changing things.

Carmichael: Tomi, this is Crom. Do you have any thoughts since you’re out there in the middle of California, what’s your sense being on the ground out there, the recall of Gavin Newsom?

Lahren: I have been somebody who’s gone after Gavin Newsom for several years. I used to live here in LA. I lived here for three years, and I became very invested in California politics. And I’ll tell you, the recall is going to happen.

I believe that it will be successful. And Gavin Newsom, for those that aren’t familiar with California and California politics, all the bad policies that have been adopted by the Biden administration, those policies were tested and failed here in California.

And that’s what becoming nationalized, even in Nashville with our Mayor, who I call John ‘Chicken’ Cooper. A lot of the failed policies that he would implement and the taxations that he would use to get out of his own problems.

Those are all ideas that started here. And Californians on the left and the right, because this recall is not just a Republican recall. There are not enough Republicans in California to accomplish what they accomplished with those recall signatures.

These are Californians standing up and saying, you know what? We’re tired of the tyranny, we’re tired of the infringements, you shut us down needlessly. Other states stayed open. Tennessee being one of them, that kind of was able to stay somewhat open.

Florida, obviously my home state of South Dakota. So Californians are looking at their leaders, saying, no more, buddy. And I believe it’s going to be successful. They will get rid of Gavin Newsom.

Carmichael: If they get rid of Gavin Newsom, that’ll be an earthquake in the political world. And I hope you’re right for the sake of Californians. I was looking at an article for the amount of shoplifting in California since California changed the law that you have to shoplift $950 or more each time in order for it to be a felony.

The businesses like Walgreens are shutting locations left and right because their store shells are just being destroyed by vagrants. And actually, now organized crime that goes in and you’ll have a flash mob, and they’ll each steal $500, $800 bucks apiece and walk out.

Lahren: Oh, that’s 100 percent true. And for those in Tennessee that are listening, I know that this seems like a California problem. But be warned, when you start having what they call realignment laws and reclassification where they take what used to be felonies, and they re-classify them as misdemeanors.

This is exactly what happens. And I’ll tell you, this. I’m staying in Santa Monica. And we’re going out to Venice later. I was in Venice yesterday. It’s absolute filth. It’s tents lining the streets, and these people here have become so emboldened that they believe they can do whatever it is that they want.

And now they’re struggling to refund because they realize what a bad idea it was. But it all comes from those policies. And Tennessee beware because a lot of Californians are fleeing to Tennessee, but they’re bringing their voting records and their voting tendencies with them.

So we got to keep our ears perked up and pay attention to those things as they come in because we do not want to California our Tennessee.

Carmichael: Tomi, what we’ll have to do here in Tennessee is set up re-education camps. (Laughter) Now I have a question for you because you’re on the ground out there and you’ve lived there for three years.

Why do the people of Venice, for example, because I’ve seen the videos and it is absolutely just the only word I can think of that even comes close to it is just absolutely just disgusting. What has gone on there?

Why do the local people vote, the mayor and the city council back into office? Why do they do that?

Lahren: You know, it’s a culture in Venice when they look at homelessness. But just being out there and we’re going to go out there later today and talk about it and talk to some individuals. But people are upset with it.

They don’t like it. I’m looking at these businesses that are finally being able to reopen in Venice and these restaurants. And I was saying yesterday, I can’t imagine going to eat at one of those restaurants because there’s homeless everywhere.

I’m not kidding you. When you step out of the car in Santa Monica or Venice, the smell of pee is so overwhelming that it’s disgusting. I couldn’t even eat outside. And walking outside, it’s disgusting. And it’s a culture that they’ve fostered here.

And that’s what average, everyday law-abiding California they’re supposed to walk and run through? I’m telling you, it’s like a third-world country here.

Botteri: I’ve been there and it was there many, many years ago now and walked the boardwalk that you alluded to. And for everybody who’s not been there, you basically have the street and then a row of beach houses and other types of residences and businesses and stuff.

So buildings, basically. And then a broad sidewalk. A big cement sort of sidewalk path that follows the beach line. And then on the other side is the sand. You’ll some workout areas and other sorts of pop-up types of vendors and stuff.

And then you get to the beach proper and then the ocean. And that’s kind of how it goes. And so this is a relatively small area when I was there, Tomi and this was, like 20 something years ago. This was a long time ago because I’m an old lady. (Chuckles)

There were all kinds of panhandling, all kinds of vendors. And they were all mixed up together. And it was back then just kind of an aggressive and very obviously a cultural choice of that area to allow this to tolerate this behavior.

And, of course, they’re passed out. But the number of things that they have accumulated in these tents, these are tent cities. And for people to understand this is not just Venice. This is not just Santa Monica. This is California!

This is everywhere here. It’s in San Diego. It’s for sure. In San Francisco, it is everywhere in this state. It is a culture of homelessness. And I know that other states have dealt with this as well. I know in Austin, Texas, they shot down people’s ability to really reside in their tents like it was a dwelling.

And they did the same thing in Colorado, in Denver. But if that ever comes to Tennessee, I’m telling you, we’ve got a homeless population that’s certainly growing. And it’s not a culture we want to foster.

Of course, we want to make sure that these people are taking care of. But I’ll tell you this that people don’t understand going back to your point on crime, I’ve done a lot of research on this.

A lot of these individuals that are here at homeless, of course, some are down on their luck. Some have mental illness addiction and some are veterans. And of course, we put those people in a different classification.

Lahren: That has Californians terrified.

Botteri: It’s a terrible situation, and it’s got to be better. There is a great commentary at The Tennessee Star. It’s a deep dive into the homelessness industrial complex. I highly recommend that you read that. It’s fascinating.

Tomi Lahren, thank you so much for joining us. I hope you come back soon. Stay safe; stay well, there, while you’re in California. We’ll talk to you again soon.