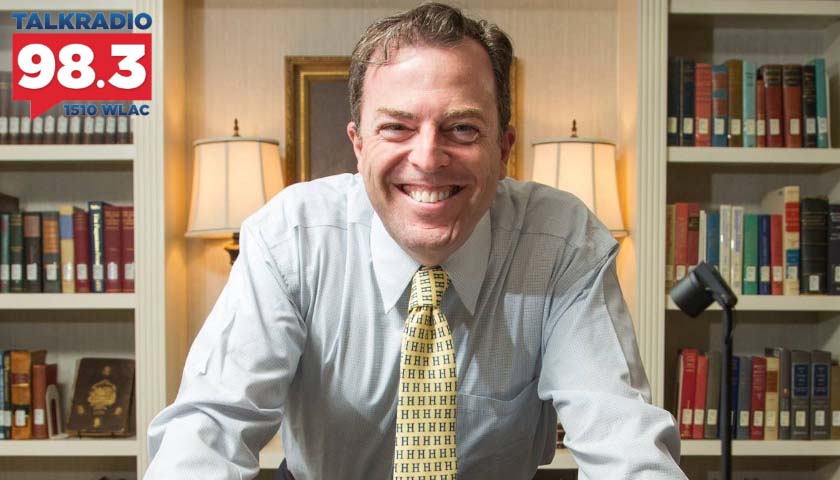 Live from Music Row Monday morning on The Tennessee Star Report with Michael Patrick Leahy – broadcast on Nashville’s Talk Radio 98.3 and 1510 WLAC weekdays from 5:00 a.m. to 8:00 a.m. – host Leahy welcomed Dr. Matthew Spalding, Vice President of Hillsdale College and the Executive Director of the 1776 Commission to the newsmakers line to discuss the dismantling of the 1776 Commission by the Biden administration and new resources for parents of K through 12 students.

Leahy: We are joined now on the newsmaker line by Dr. Matthew Spalding. Kirby, Professor in Constitutional Government at Hillsdale College and Dean of the Van Andel Graduate School of Government. Welcome, Dr. Spalding.

Spalding: Great to be with you. Good morning.

Leahy: The Hillsdale 1776 curriculum has been released. Tell us about it and its relationship to the 1776 Commission formed by President Trump and then disbanded immediately upon inauguration by Joe Biden.

Spalding: Well, a quick succession of things. The 1776 Commission, which was formed by the President, I took a leave and was Executive Director of that and we put out in 1776 Report, which you pointed out was immediately acknowledged by executive order because the Biden administration wanted to go in the direction of equity and pursue its racial policies, including things like critical race theory or various versions of that in the federal government.

They want to go in a completely political direction to pursue their current racial objectives and policy. The report called for new curriculums and Hillsdale, which has been working on teaching and doing teaching and curriculum for decades.

And the college for over a hundred, almost 200 years now has been working on a curriculum. It’s been released two months ago. The 1776 Curriculum and it’s already had 50,000 downloads in a very quick amount of time.

It’s about civics and history meant to fill this immediate void and eventually draw out a full curriculum for anybody who wants to use it.

It’s all free of charge and we’re putting it out there to have an alternative to the absolute absurd curriculum and things being put out by public schools, by critical race theory, and what is going on over the country.

Now there actually is a great alternative for homeschoolers, private schools, public schools, and anybody who wants to use it.

Leahy: Where can people go to download this curriculum? You can go to the main college website, Hillsdale.edu. There’s also a K through 12 website that has other materials for people who teach and have kids. K12.hillsdale.edu.

Any of those you can download, click and there’ll be easy ways to find it and print it off yourself. It’s whole health and pages, all the lessons, questions, and everything would need to teach these materials from K through 12.

Leahy: How many public school teachers have downloaded this and are using it in their classrooms?

They’re being used to transfer this critical race theory stuff. There are some good people still in some of those schools who are looking for alternatives, and they’ll look to this whether public school will adopt this formally or not.

That’s another question. But now there’s something else that you look to in order to offset what they’re trying to make them teach. And let me just reiterate where to go to download this fantastic curriculum. K12.hillsdale.edu.

Leahy: Dr. Spalding, we have this little event here. We call the National Constitution Bee based upon a book that I co-authored, A Guide to the Constitution and Bill of Rights for Secondary School Students. This will be our fifth year. We have some experience in interacting with public school teachers.

And I can tell you it’s not been encouraging in terms of their interest in having traditional American constitutional civic values taught. And it seems to me that this is a systemic problem.

State legislatures around the country have laws that say you should be teaching the Constitution. I’m not seeing it implemented at K12 public schools. Do I have this right? And if I do what can be done to turn it around beyond making this great curriculum from Hillsdale available?

Spalding: No, I think in general, you’re absolutely spot on that’s correct. And you actually alluded to a very important thing that’s the key to the solution here. The federal government under the Constitution and by federal law has no role in curriculum.

As matter of fact, by law, the Department of Education is prevented from getting involved in curriculum. It’s a state matter. States have all the power. State legislatures can give guidance to their departments.

They create the curriculum, they control the public schools, and that goes from the states all the way down to school boards. The most important thing to change the politics of what is going on right now, because I think the debate in curriculum and K through 12 is a cultural manifestation of our national debate is get involved in those things.

If you have the where with all to be involved in a state legislature or have ways to get involved in anything all the way down and especially in school boards, where the decisions made about adopting curriculum are crucially important.

And there states and local communities and school boards have a lot of authority. Don’t want to assume the settle government is taking us over and can fix it, or is the problem.

You can’t think about it. Get involved in those things. It’s going on all over the country. We need more of that because that’s what going to upset the apple cart.

And I think there in those debates, people who are concerned and want to see a more traditional curriculum have not only a foothold but in many ways a great advantage given the people there.

The most interested are the ones that have the children who care for them as opposed to the teachers who often don’t and are merely implementing these bad curriculums.

Leahy: It seems to me that the way to go, if you want to have this great curriculum in your school is to go directly to teachers, directly to the school board, and directly to administrators and present it to them. K12.hillsdale.edu, that’s the short term. The intermediate-term would be by your state legislature to accept and promote this. What are your thoughts on that?

Spalding: No, I think that’s right. The immediate is a school board debate. State legislatures. There are a lot of states. I’ve been very involved in Florida, Texas, Tennessee, other states here in the process that either have and now they’re implementing or they’re changing their city rules and looking ahead.

Leahy: Why do so many school administrators promote a left-wing, we hate America version of the country?

Spalding: I think the answer there gets into the long-term effect, which, unfortunately, and many people have not been focused on are the teachers’ unions and the effect through the academy of shaping teachers and the creation of curricula.

And then what’s going on in state legislatures. As long as the progressive elements of liberalism, either intellectually or politically or through unions control the process, they’ve been working on this for some time, I think this critical race, which is a bridge too far to say the very least, has revealed what has been going on.

And with COVID we saw our children getting this stuff first hand at home, and I think it’s really kind of pulled back the curtain. Now we see this debate for what it is and have our opening despite the fact that they’ve been working on these things for some time.