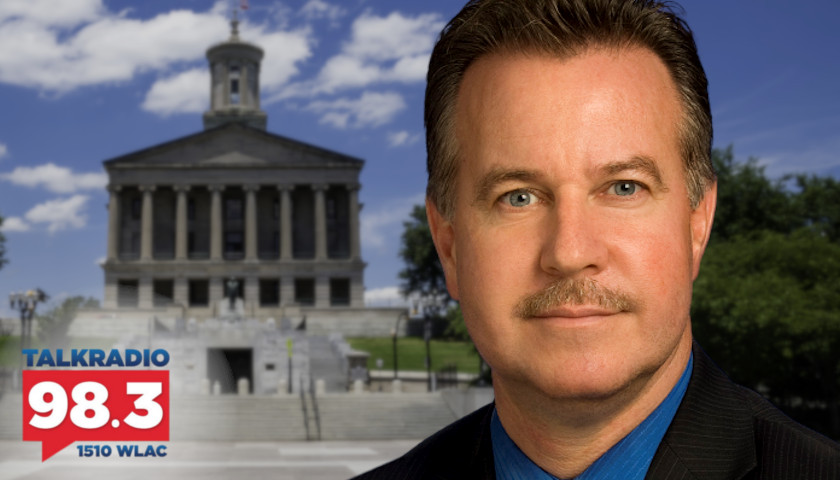 Live from Music Row Thursday morning on The Tennessee Star Report with Michael Patrick Leahy – broadcast on Nashville’s Talk Radio 98.3 and 1510 WLAC weekdays from 5:00 a.m. to 8:00 a.m. –  host Leahy welcomed Tennessee State Representative (R) Mike Sparks of Smyrna to the studio to discuss the end of the legislative session and the passing of the bill for gun safety and the Sales Tax Exemption.

Leahy: In studio with us, State Representative Michael Sparks from Smyrna. So the Tennessee General Assembly has just finished just wrapped up adjourned its regular session on Thursday. Are you tired?

Leahy: The last week seemed to be just non-stop work. What is it like up there as you push towards the end and there are things you want to accomplish? What’s that like?

Sparks: For me, it gets a little frustrating. Tempers start to flare and committees are starting to shut down. You want to get your bills out of committee and you’re trying to lobby for your own bills and get with folks, get with the chairman, and rally if you will, the troops to support it.

I know one of the last days June Assembly. I think it was a 12 hour day for me because my wife was like, hey, what took you so long? And I got home about 9:30 pm. But it does get a little frustrating for folks. Anytime you’re working, you’re in a budget meeting for four or five hours. Those lengthy meetings start to wear on you.

Leahy: Yes they do, don’t they?

Sparks: And people, I’m not saying they’re doing off, but they’re just not as alert as they were when they start a meeting. And that goes for everybody, whether it’s a church sermon or a college class.

Leahy: Do nerves get a little bit frayed up there towards the end?

Sparks: They do. They really do. I kind of snapped over our last days because I just thought some folks weren’t listening and it was about mental health and disabilities. And I was going to share a story about a guy that worked in Murfreesboro at Journeys and Community Living.

I kind of felt like the committee really wasn’t listening. The point I was making is we got folks today that are able-bodied and people that are lazy that don’t want to work. And we’ve got an entitlement mentality where you got a guy deaf and blind, busting his butt working and grateful to have a job.

Leahy: Let’s talk about something that I suppose people could say is a little thing. But in some regards, maybe it’s a big thing. You introduced a bill that became law.

Sparks: Yes. It was a miracle.

Leahy: Tell us. Now, was it a bill or resolution?

Sparks: It was a bill.

Leahy: The governor signed it, right?

Sparks: Well, no, not yet. We’re hoping to do a ceremony on that here pretty soon.

Leahy: Tell us the title of the bill and when the process by which this was passed by the House of Representatives and by the state Senate.

Sparks: When I say miracle, we were talking off the air. I do really think it was a miracle because what was strange was it was like the bill deadline as far as filing legislation Sarah Kyle’s assistant came over. Sarah Kyle is a Democrat and asked if I would take this bill, which is an odd question.

Leahy: What bill was it?

Sparks: It was the tax exemption on gun safes and gun safety devices. And I was like, whoa, I don’t know about this. So I started making some phone calls to ask some people. And I called John Harris. You know John Harris.

Leahy: John Harris, the founder, and CEO of the Tennessee Farms Association.

Sparks: And John probably knows more about this stuff than most people. And I dare say. And so John said, Mike, we’ve been trying to pass that bill for a few years. And he said we’re fully supportive. And I called the NRA representative too Matt, and he said, oh, we’re supportive of that.

And I was thinking, well, what’s wrong? How come this bill hadn’t passed? And so I ran it. The fiscal note was, I think at the time was the way we had the bill structure was like $295,000. And the state doesn’t like to lose tax revenue.

We’re heavily dependent on sales tax across the state. And so what I thought I’d do is I thought, well, I’ll get this down to a sales tax holiday for seven days to get the fiscal impact down to about to $96,000. So I ran that. But I had something pretty cool happen. I contacted Mark Brassfield with the safe house.

Leahy: What is the safe house?

Sparks: He sells gun safe and gun safety devices in three locations across the state. And I said, hey, tell me about this bill. And I said, would you come up and testify on this bill? He’s like, I’ll be happy to. And when he came by the office, and I remember I was talking to him in the office, I said, man, you are a believer.

And he’s like, well, yeah, I’m a believer, meaning a Christian believer. So we were talking about this. And I prayed about this in the office. And I said, man, Lord, just give us a word to say and courage which to same and help us with this piece of legislation.

And we got him in to testify. But also brought up that I attended Kyle Yorlet’s funeral. Remember, Kyle, that was gunned down with a stolen gun. Some kids in Nashville, I think, broke into a car or truck and stole a pistol. And that’s my understanding.

And he was killed, sadly, but Ironically, happened to go to Kyle’s funeral. I didn’t know who Kyle was or his family. And I sat at the back of that funeral. And I kept thinking, Lord, you got me here for a reason. There’s a reason I’m at this funeral.

Is the reason for this piece of legislation? I don’t know. But I shared that before the committee but here’s what the committee did. Thank God for it. I mean, I’m not trying to take credit for it. Chairman Patsy Hazelwood, chairman Gary Hicks probably represent Sam Whitson and others like Leader William Lamberth.

They ended up kind of getting involved. And I think they were a little touch with the testimony and stuff. They made the bill better than I did. It’s a whole year sales tax cut. So if you want to buy a gun safe, gun safety devices.

Leahy: So did it pass legislation?

Leahy: It passed in the House?

Sparks: Yes. The Senate passed it. Kerry Roberts stepped up to the plate and Sarah helped get it over the finish line.

Leahy: When did these bills pass in the Senate in the House?

Sparks: It was the last week of the session.

Sparks: Thank God. I had about 56 co-sponsors. Democrat and Republican.

Leahy: And the bills will accomplish?

Sparks: That will accomplish taking taxes off gun safety. If you want to buy a gun safe, July first.

Sparks: Tax-free. That may not sound like much but that could be $200. in savings.

Leahy: And the governor has it for his signature?

Leahy: A good story of legislation you carried that coming through.

Sparks: And thank you for you helping me bring awareness to it.