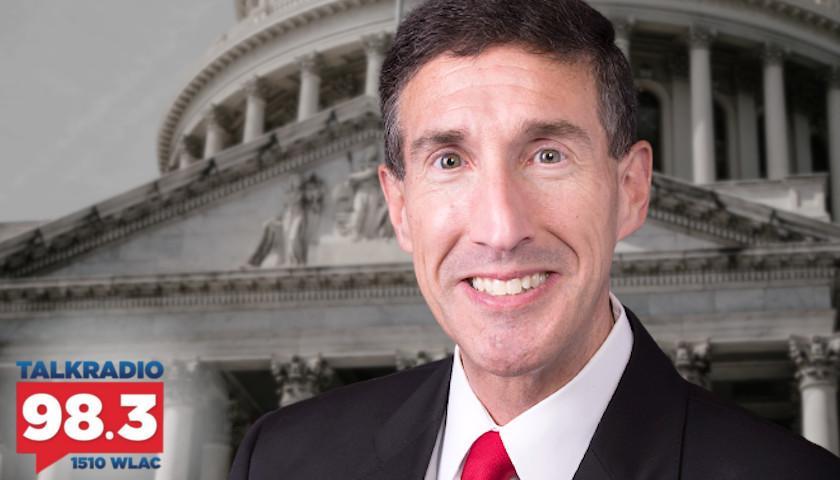 Live from Music Row, Friday morning on The Tennessee Star Report with Michael Patrick Leahy – broadcast on Nashville’s Talk Radio 98.3 and 1510 WLAC weekdays from 5:00 a.m. to 8:00 a.m. – host Leahy welcomed Congressman David Kustoff to the newsmaker line to describe what he see’s as top priorities should Republicans take the House and Senate and how to push legislation through with a Democratic president.

Leahy: We are joined on a newsmaker line by our very good friend, Congressman David Kustoff from the 8th Congressional District. Good morning, Congressman Kustoff. How are you?

Kustoff: Good morning. Thanks for having me all day. I’m good. We’re four days away from the election, and things feel good. But look, we’ve got to continue to run through the tape right now.

Leahy: Run through the tape. That’s a good phrase. So, Congressman, in studio, the original all-star panelist Crom Carmichael, I have a question for you. It’s likely that you will be re-elected.

It’s likely that the Republicans will take over the House of Representatives and Kevin McCarthy will become Speaker. If that happens, what committee do you see yourself chairing?

Kustoff: Chairing?  I don’t know about chairing. (Leahy chuckles) I will say I’m honored, and I like the way you set all that up. I’m honored. I’m on the House Ways and Means Committee, obviously, it is the oldest committee in the House of Representatives.

It’s the economy. It’s inflation. That’s really primary. Crime. The border. People are really hurting out there right now, and they know the problems, and they’re looking for solutions, and they’ve gone a little bit beyond what you asked me.

But I think about Biden a lot in these last several weeks, and he just he does not get the problems. And he’s certainly not talking about the solutions. I think that’s one reason that you’re seeing the polling and all the energy flow through to Republicans like water.

Leahy: Crom Carmichael is in studio. He has a question for you, Congress.

Carmichael: Congressman, let’s assume for purposes of discussion that Republicans do take the House by a nice margin, and they take the Senate by, let’s say, three. You still have a Democrat in the White House, and so you can’t pass meaningful legislation unless the president is willing to sign it.

I don’t see much hope of that. The opportunity that you have is to create distinctions between the two parties for the next election if, unfortunately, the Biden administration won’t do anything.

And I think my question is this. When we look at the economy, and you look at inflation, and tax cuts alone, we watch what happened over in Britain.

Kustoff: It’s definitely about fiscal restraint. Let me go back a little bit because I think you set it up well. And to your point, I feel good about the House and the Senate. We’ve got a good chance to get the Senate.

If we get 51, then we get control, right? And so what I hear a lot from my colleagues is its fiscal restraint. There are a lot of reasons for inflation.

But one big reason is these big, massive bills that Biden, Pelosi, and Schumer have pushed down the throats of the American people without any Republican support.

And I think about two. One of them is last year that big, huge $1.9 trillion American Rescue Plan, which was all brand new money. A lot of stimulus loaded in that and enhanced unemployment benefits.

And then just a few months ago, the bill that Manchin really championed, that they named the Inflation Reduction Act, which obviously, that’s not what that does.

$745 billion in brand new money for Green New Deal initiatives. So that exasperates this big inflation problem that we’ve got right now. And so to your point, it’s a lot about fiscal restraint and curbing back the size of the federal government.

Because if you try to repeal the bills where the money is already out the door, I don’t know if that does any good. The administrative state is huge and it’s crushing the country with regulations and everything else.

What is the appetite, for example, of cutting the administrative state by 50 percent and then passing that bill and sending it over to the Senate? My sense of it is the Democrat Party is the party of big government.

That’s what it lives for. And if the Republican Party isn’t the party of shrinking government, then I don’t know what the ying and the yang is. How does the country oppose the bigness that exists and crushing us all?

Kustoff: There are reasons that Republicans have been doing so well. Listen, we don’t have the election yet. I look at last year when Republicans did so well in states like Virginia winning the governor, lieutenant governor, and Attorney General. So it’s about differences in ideas.

And I don’t want to get the cart before the horse on specific appropriation legislation that we’ll send up. I think you’re going to see dramatic differences between our way of thinking and Biden’s way of thinking.

And the way you asked it, I don’t know that I disagree with you about what Biden will do and won’t do. I think it’s interesting, though if we get the House and if we get the Senate. If Biden decides to come out of his far left corner and try to work with Republicans a lot as Bill Clinton did in 1995 after Republicans won the House.

Leahy: In studio, you’re getting a lot of skeptical looks from Crom, and for me, I don’t see him doing that at all. Is there any reason why you think he would be nice to you?

Kustoff: Well, you know what? You may very well be right. Here are the reasons he might. Number one, the country is in trouble and needs relief, and he can’t get things done without the support of a Republican-led House and Republican-led Senate.

Secondly, to some point, he’s got to be looking at legacy type stuff, and he will be 80 years old later this month, which means if he ran for re-election, which I’m very cynical about, he would be 82.

And at some point, he’s got to be looking at legacy-type stuff. He will have a choice. If we win the House in the Senate, he can work with Republicans and get things done, or he’s looking at two years of gridlock.

Leahy: Congressman, here is my sense of what he thinks about his legacy. His legacy, in his mind today is what’s for lunch? (Laughter) You know what I mean? (Laughter) You could use that line, by the way.