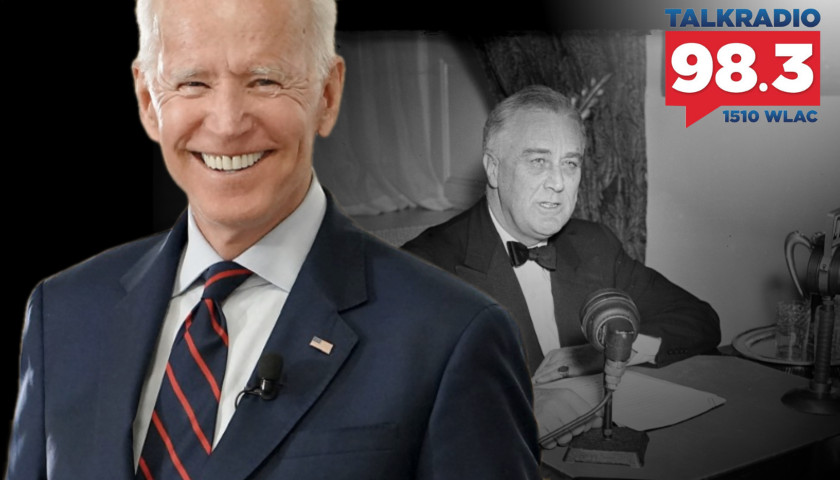 Crom Carmichael Breaks Down the Mind of Joe Biden, FDR, and the Great Depression

Live from Music Row Monday morning on The Tennessee Star Report with Michael Patrick Leahy – broadcast on Nashville’s Talk Radio 98.3 and 1510 WLAC weekdays from 5:00 a.m. to 8:00 a.m. – host Leahy welcomed the original all-star panelist Crom Carmichael to the studio to discuss Joe Biden’s failed policymaking through his 50-year career and elements related to the Great Depression.

Carmichael: Well, he’s been in politics for close to 50 years. As far as I know, he’s never been right once.

Carmichael: On domestic policy, on foreign policy. And now that I’ve seen this story now, and it makes sense. And if you listen to the way he talks about this emergency and that emergency and we must do this, we must do that. When Roosevelt was President in the 30s, and he was trying to get out of the depression, Roosevelt saw government action as a way to get out of the depression. So he had all these make-work programs.

Carmichael: And that’s not the National Rifle Association.

Carmichael: He wanted to make the federal government like a Communist state.

Leahy: Kind of fascist, actually, I would say.

Carmichael: Well, that’s fair. But what I’m saying is I don’t see much of a distinction in terms of the power of government between fascists and communists.

Leahy: And I think you’re right. The difference is under fascism, the large corporations and the government act as one often. The National Recovery Administration that General Hugh Johnson was put in charge of, that’s what they did. They made all these rules that crushed the little guy. Sound familiar?

Carmichael: Well, I’m also saying, though, is Roosevelt got a 94 percent tax rate, which the means of production therefore, as far as Roosevelt was concerned, the country would be better off if the government controlled the means of production (i.e. all the money). And then determine how best to allocate it. And that concept will not work. And the reason it won’t work is the fundamental aspect, the most important thing of a market economy is it signals the capital markets on where money should go.

Leahy: Thousands and hundreds of thousands of individual movements.

Carmichael: Decisions that are informational in nature. Whereas if you get either a corporation with a monopoly, AT&T. Before Jimmy Carter broke up AT&T, AT&T thought that they were the best-run company in the world.

Leahy: Well, of course, they were, Crom.

Leahy: I believe you had a conversation with a senior executive there.

Carmichael: Just sitting on an airplane.

Leahy: And he told you…

Carmichael: That long-distance rates would go through the roof.

Leahy: If it was deregulated.

Carmichael: No, after because deregulation had happened. And he was furious. And he’s the one who claimed that AT&T was the most efficiently run company in the world. And he said if you think your long-distance rates are high now, and by the way, back then, they could be 25 cents a minute.

Leahy: They were. I remember paying bills just before the break-up when I was doing long-distance costs were three or 400 dollars a month. Just ridiculous.

Carmichael: And that’s three or 400 dollars back then. That would be like $1,000, now. And now long distance is free. It comes with your package. So he was wrong.

Leahy: As a commander in chief.

Carmichael: You can argue that he did.

Carmichael: Now you can argue if you want to be really woke, you can also argue that FDR was a racist because of the internment camps.

Leahy: Interned 40,000 Japanese Americans on the West Coast for four or five years.

Carmichael: So if you want to take that one thing and so that’s the focus on FDR, then you could claim that he was terrible. But that’s not my point here. The war, I’m going to say he did many things that were right. And the greatest generation defeated Hitler and the axis of powers.

Leahy: Just for a moment, a tip of the hat to all of those young guys back in the 1940s. Guys who were 18, 19, 20, or early 20s, had courage. I was watching Saving Private Ryan over the weekend and what happened on D-Day.

Carmichael: Well, Band of Brothers is a wonderful documentary. But at any rate, all through the 30s, FDR was trying to use central planning to get us out of the depression. And we had a second depression in 1937 and 1938.

Leahy: Very bad. It was a terrible depression again. So we never really got out until the war. The problem is that Biden doesn’t realize that. And so Biden thinks he’s trying to make himself out to be one of the great presidents of all time. Here’s a guy who literally can’t think anymore. But even when he could think…

Carmichael: He didn’t think well. He’s surrounded by a bunch of handlers who also believe in central planning and who also believe more or less in a fascist form of government. But when you listen to him talk like the COVID Relief Bill, that’s what it was named. Nine percent of it was for COVID relief. 91 percent was for a bunch of other things.

Then if he wants to try to cram through a bunch of other stuff that’ll break the economy and cause inflation, let him do that. So Republicans want to support infrastructure, which is about $650 million of a two-point-two trillion dollar bill. But they’re going to try to jam the whole thing through.

Carmichael: Major League baseball will get mad at you.