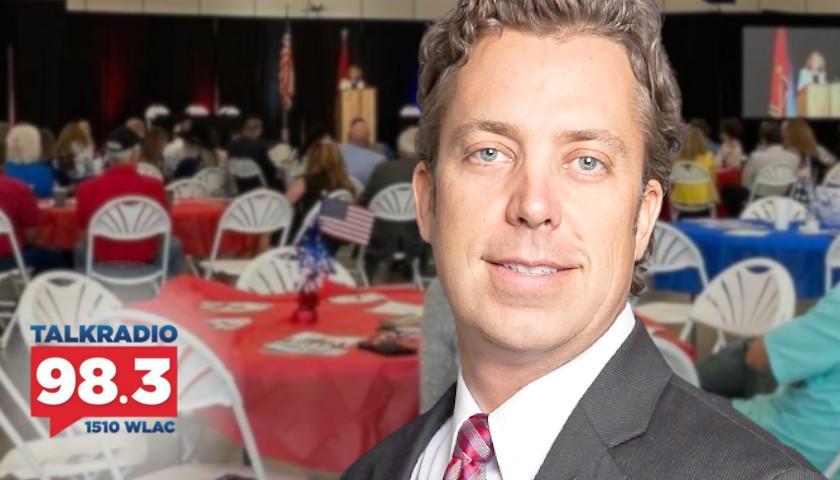 Leahy: In the studio with us, our very good friend, the former mayor of Maury County, that bastion of freedom, that turbocharged engine of economic growth, Mr. Andy Ogles, who is now the GOP nominee for Congress in the 5th Congressional District. Good morning, Andy.

Ogles: Good morning. You know, I have to say I’ve missed being in studio with you.

Ogles: And I don’t miss getting up at 4:00. It takes me about an hour and 10 minutes to get here. I live out in the country. And here we are on Music Row, and it’s a bit painful. When my alarm went off this morning, I was like, oh my goodness.

Leahy: Well, but you’re up early now, running for Congress.

Leahy: And I’ve been tracking – you’ve been doing an awful lot of grassroots meetings. Every day you’re out there talking to folks here in the 5th Congressional District.

Ogles: Well, it’s funny. So Dr. Manny Sethi, he ran for Senate, good friend, had an event for me last night, and it was a packed house. We had some folks come up and they said, hey, I’m going to be with you on Friday.

And I honestly had this look of I don’t know what event that is because we have so many events between now and Friday. When you look back to the primary, the reason why I won is that we focused on the grassroots.

We stayed on-message, we never deviated. When the bombardment started, we just stuck to the ground game. And that’s what we’re doing here in the general as well.

Leahy: Well, let me just say you won the primary pretty handily at 37-26?

Ogles: Yes. Not that I was keeping track, but 11 points.

Leahy: Not that you were keeping track.

Ogles: Our internal had me up by six. And actually, of course, there’s always a margin of error. So it’s a three-to-six point margin is what we were expecting. If it was on the three-point side on election night, you’re a little bit nervous because voter turnout can affect the outcome, right?

If it was on the six, if you’re trending on the six-point side, you’re about ready to give a high five because that margin, you’re outside the margin of victory. But when the polls started coming in, I jumped up to 12 points and pretty much stayed there all night and settled in at 11 and we just outperformed.

But that was really that GOTV [Get Out the Vote initiative] in Maury and Williamson, and even in Nashville, Davidson County, the model that we built, I needed 18 percent and I got 21 and a half. So even in an area where I was going to come in third place, over-performed our own projections.

Leahy: Now, one of the things you showed me is a countdown on your cellphone. Where are we on the countdown? Of course, you’re tracking the time until the polls close here on November 8th.

Ogles: We did this during the primary as well because it’s exhausting. I mean, great example: Monday night I was in Hohenwald. Last night I was here in Nashville. My son had a cross-country race, which I missed because I was campaigning for Congress. And you know, right now that work-life balance is a challenge.

Ogles: That’s part of it. But again, that’s why we won the primary. That’s why we’re going to win the general, is because we’re focused on the ground game and going to people where they are and just talking about real issues.

Even last night at the event, I do the quick intro and then immediately just pause and say, what do you want to talk about? And basically, it becomes an impromptu town hall.

And ultimately we end up getting to all the things that would be on the Commitment to America, right, or whatever list that I assume people want to hear, but they get to decide.