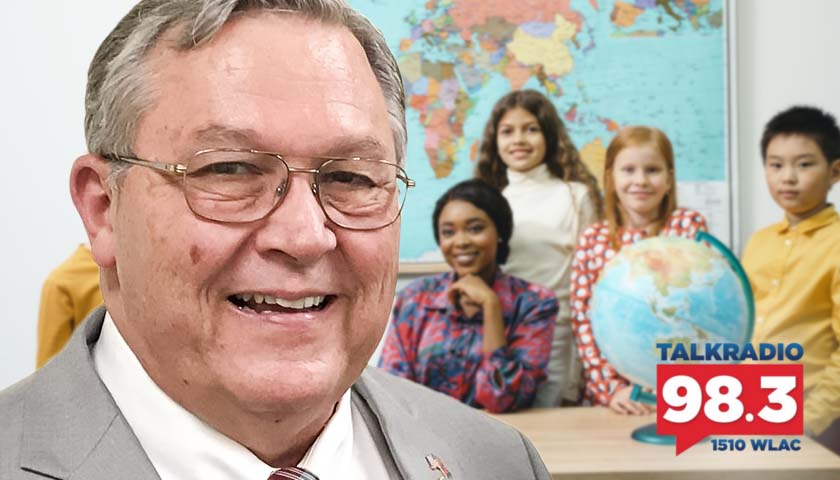 Live from Music Row Wednesday morning on The Tennessee Star Report with Michael Patrick Leahy – broadcast on Nashville’s Talk Radio 98.3 and 1510 WLAC weekdays from 5:00 a.m. to 8:00 a.m. – host Leahy welcomed Tennessee State Representative John Ragan (R-33 District) and chairman of the Government Operations Committee to comment upon the State of the State Address and mechanics of the Basic Education Program.

Leahy: We welcome to our newsmaker line, good friend, State Representative John Ragan, who is the chairman of the very powerful Government Operations Committee in the House of Representatives from Oak Ridge. Welcome, Representative Ragan.

Ragan: Thank you. You, sir. It’s good to be on, and I appreciate you having me on.

Leahy: We always like having you on. And you’ve not been in studio yet, but come on in-studio sometime, because that gives us a little bit more time to get to know you and get to know the details that are important to you.

Ragan: Actually, the very first one I was attending was quite impressive, I’ll be honest with you. This is like my 12th one, I think, or the 11th one.

It’s more an exercise now in listening to what the governor is putting out and making sure that I understand it so that it fits with the programs we’re going to be pushing forward. A little less impressive to me now let’s just say that. (Leahy laughs)

Leahy: Now. You’re focused on the policy because a lot of key bills have to go through the committee you chair, the Government Operations Committee. Was there any in Governor Bill Lee’s State of the State Address Monday night, policy proposal that surprised you, or was it pretty much what you thought would be coming down the pike?

Ragan: No, I didn’t get any real surprises out of it, to be honest with you. I was pleased in the sense that there was a little different emphasis in some areas than I was expecting. In a sense, you might call that a surprise.

But it wasn’t complete from the standpoint of I knew that something like that would be mentioned. The governor’s approach, frankly, I just had a conversation with the governor in his office yesterday, and he and I have a great deal in common in terms of our passions for state government. Now we have our differences too. (Chuckles)

Leahy: People with different views have to work together, don’t they?

Ragan: Exactly. That’s the way the government gets things done otherwise you have complete gridlock.

Leahy: Exactly. It’s a pretty big budget. $52 billion with a b. That’s a lot of money. I noticed one thing on it, and we’ll get to the elements that were in it. One thing that caught my attention, the state of Tennessee is one of the best fiscally managed states in the country, and our all-star panelist is in studio, Crom Carmichael and he has always said that’s a tribute to the work of the Tennessee General Assembly.

I agree with him on that. We’ve got this huge budget surplus right now. I did not see any proposal there to cut taxes, either sales taxes or gas taxes. Does that catch your attention as well? And what are your thoughts on that?

Ragan: You are correct. I didn’t see any proposals there either to cut taxes. Now having said that, I and several of my colleagues are carrying bills to do just that. I am aware of and I am supporting, as a matter of fact, one of my colleagues with a bill to completely eliminate the professional privilege tax.

We started doing that session before last. We got about half of them, and we’re going to try to go after the other half this year. And I think we’re going to be successful on that. I personally have a bill to eliminate taxes on precious metals that are purchased for collectible or shall we say IRA purposes.

Leahy: Like gold, silver, and that sort of thing?

Ragan: Right now, the state does not charge a tax for someone to buy a gold coin and put that in their retirement account or their hedge fund or whatever, the rainy day issue. But we do charge them a tax for just buying a gold bar.

Ragan: Yes. My bill would eliminate that. It’s going to be the same for everybody if this bill passes. So, yes, the governor didn’t mention cutting taxes, but those of us here in the legislature are aware of that, and are, in fact, tackling that issue.

As far as the fuel tax, which really I think a more correct term for that, the Department of Transportation is a user fee because the issue right now is predicated on the fact that we keep the roads up from that. That’s fenced off and not used in our general fund. It’s completely devoted to the roads.

Leahy: And we were talking with State Representative Jerry Sexton earlier today about that, and although it does appear at least anecdotally that we’ve seen a lot of road work done since that gas tax was passed even before.

This is very confusing to me, and I wonder if you could help kind of eliminate a bit of that confusion. As part of the governor’s plan, he’s proposed a couple of things, an updated version of what’s called the Basic Education Program and a $750 million increase in K-12 education funding.

Tell our listeners what the Basic Education Program currently is and what your understanding of what the governor is proposing to do to change that.

Ragan: The Basic Education Program is a very complicated formula by which we allocate money to school districts. And it’s complicated in part, in no small part, as a matter of fact, because courts have been involved with it, stirring the pot with bits and pieces here and there that we must adhere to.

Now the reality is that the state money is only a part of what goes to those schools because while they cannot decrease it, they are free to add to it.

Ragan: Yes. However, that complicates that BEP issue and the reason the governor specifically talked about adding things for teachers salaries, as we have been in the past and I have said this myself because it’s based on that formula we’re talking about saying we’re giving the teachers a three percent raise.

That was a true statement based on the teachers that we fund out of that BEP. But districts that have hired extra teachers get that money. And they say, well, it’s not fair just to give the teachers that are in this formula the raise and not give the others.

They have the authority at the local level to as long as they’re staying within that accounting budget item, the number that covers teachers salaries, teachers benefits, number of teachers, et cetera, there’s a number of things in that same accounting code. As long as they stay within that, they can spread that money around as they choose by state law.

So when we say we’re giving the teachers a pay raise, we really mean it. But it has to be within the confines of that formula. The local education authority can, in fact, redistribute that within the accounting codes as they see fit.

Leahy: Now let me ask you this question. I’m looking at the performance of our K-12 public education here in Tennessee, and it looks to me like reading, writing, and arithmetic, proficiency at every level has declined precipitously across the board for about five years. That’s what it looks like to me. If that’s the case, do we have the right system? Is this system working or is it failing?

Ragan: Ok, the straightforward answer to your question, is it’s failing, but not totally. When I was first elected back in 2010, I came down here with one of my campaign positions to improve our education system.

At that time, Tennessee was ranked 49th out of 50 in our states. We clawed our way up to 35th, which is not a position to brag about, but the movement certainly is. And at that point, we began to plateau, if that’s the right word, and we weren’t going backward.

But with the advent of COVID, you are correct. We declined precipitously. In relation to other states, that data is still out there to be looked at. But I sit on every education committee in the House except one.

And I will tell you, education is a passion of mine and has been since I’ve been down here. I am really, totally disappointed in that number that you talked about there. And we won’t call the numbers.

But the work that has been done on this has pointed very squarely to the third-grade reading competencies. That issue is something we have tackled.

We passed a bill during our first extraordinary session last year when we got that federal money. The first thing we did was dump it into the literacy program. We are devoting state money to that because if a child doesn’t learn to read by the end of the third grade on grade level, their academic career is hampered forevermore after that.

Leahy: Representative Ragan, Crom Carmichael has a question for you. He’s in studio with us.

Carmichael: Chairman, very quick question. In Davidson County the results in the charter schools, especially in the lower grades, is much, much better than in the government-run schools. What do you think the prospects are for increasing charter schools?

Ragan: We have put a path in place to do that. Just so we’re clear, a charter school and state school board or local education authority, they’re both public schools.

Ragan: But it’s in the governance.

Ragan: A charter school is governed by an entity that is not beholden to the election process. They’re contracted and the local education authority has input as to whether or not they get approved or not.

So a charter school is just a different way of running the school. What you pointed out with your question is that charter schools seem to have a better system of governance in terms of impacting student performance.