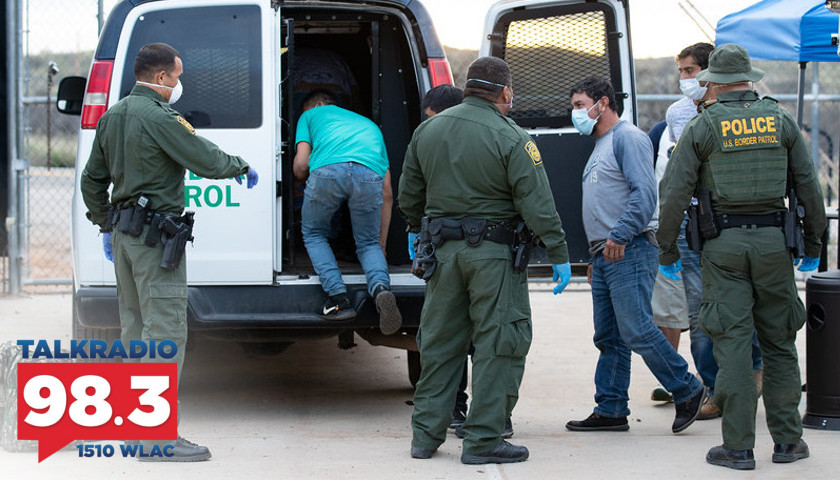 Center for Immigration Studies Mark Krikorian on the Border Crisis: ‘Biden Took Something That Was Fixed and Broke It’

Live from Music Row Monday morning on The Tennessee Star Report with Michael Patrick Leahy – broadcast on Nashville’s Talk Radio 98.3 and 1510 WLAC weekdays from 5:00 a.m. to 8:00 a.m. – host Leahy welcomed Executive Director of the Center for Immigration Studies Mark Krikorian to the newsmakers line to discuss the repealed immigration policies of Trump that has lead to the Biden administration’s inability to control the border surge.

Leahy: We are joined on our newsmaker line right now by our good friend, the executive director of the Center for Immigration Studies, Mark Krikorian. Mark, what a terrific piece you had on Thursday in the National Review about Vice President Kamala Harris’s, your words, layover in El Paso.

I wanna take this sentence from your article and just get you to elaborate on this. ‘As hard as it is to believe the Biden-Harris administration was taken by surprise by the border surge that it caused.’ Can you tell us more about that?

Krikorian: Yes. The administration probably knew that there was going to be some increase at the border when they undid all of the things Trump had done which successfully stabilized the border.

I mean, Trump didn’t solve everything but definitely had stabilized the situation. They basically expected a little bit of a surge, but Mexico would help them suppress it, and people would listen to their pleas not to come.

He said, anybody who gets out of Cuba, we will welcome them with open arms and open hearts. And Castro looked up and said, hey, that’s a great idea. So he emptied his jails. 120,000 people streamed out of Cuba until Jimmy Carter was like, oh jeez, that’s not what I meant.

(Leahy laughs) But he was able to shut it down because he hadn’t run on immigration. He wasn’t boxed in politically. This administration has run as the anti-Trump. And since immigration was one of Trump’s top things, they had to undo everything Trump did, creating this disaster that they really don’t have any good idea about how to fix.

Leahy: Yes. It seems very obvious they don’t have any good idea how to fix it. Crom Carmichael is our all-star panelist in Studio. Chrome has a question for you, Mark.

Carmichael: Well, if, Mark, if they do want to fix it, then the obvious answer is to return to Trump’s policies.

Krikorian: Of course. But my point is they can’t do that just psychologically or politically. Right? It’s not going to happen.

Carmichael: I think the obvious conclusion is they don’t want to fix it because there’s an obvious answer on how to fix it. I guess my question to you is that they’re not going to return to the policies of Trump. And so the surge is going to actually get worse. Would you agree?

Krikorian: Yeah, sure. There’s no question. In the summer, it may actually dip. We don’t want to get ahead of ourselves. The numbers may actually go down a little bit because it is unbelievably hot down there this time of year.

And frankly, if you are planning on sneaking into the U.S., not just Central Americans, but now we’re getting people from Romania, Uzbekistan, India, and everywhere trying to get in on the action here, some of them may figure, well, let’s cool our heels for a couple of months somewhere where there’s air conditioning, and then we’ll come.

So the numbers could go down a little. But even if they do, they’re just going to go right back up in the fall. Not to get too long into it but this is not some long historical thing we always have to deal with.

This surge is the result of specific loopholes in the law that was passed in 2008 and 2009 and other changes since then. So this is not something we just have to deal with in perpetuity. Congress and the President over several administrations created this problem.

Trump stabilized it again. That’s what I mean by he didn’t fix the loopholes, but he did stabilize it. Biden took something that was fixed and broke it. And it’s not going away until we fix those loopholes and change the things that make it attractive to sneak in. Because the odds are good that you’ll just be let go.

Leahy: What are the major loopholes and what are the chances of fixing them legislatively?

Krikorian: The chances, I can tell you now are zero until there’s a change in Congress and the White House. But not to get too wonky, there’s a provision that says so-called unaccompanied minors, and we kind of take your word for it that you’re under 18 can’t just be returned home.

They have to be given hearings. They have to be delivered into shelters and delivered to their parents who are here illegally often paying to smuggle them. That has to be changed. There’s a court ruling that Congress can overrule that says minors, even if they’re with their parents, can’t be held in immigration detention for more than three weeks.

But they have to be let go, including the parents. There’s more to it than that. But that’s the kind of thing that we have basically created the situation in a time when there weren’t a lot of kids or families coming over.

People in Congress figured out what’s the harm? Make us feel good. Virtue signaling, and it won’t really have any consequences. Well, within a few years, the problem exploded because these things started really in 2008, and 2009 is when these were passed.

Leahy: What you take on the job, direct Secretary of Homeland Security Alejandro Mayorkas has been doing?

Krikorian: Terrible but terrible because that’s what he was hired to do. In other words, he’s doing the job that this administration hired him to do, which is, first of all, not to enforce immigration law.

ICE, which is under his purview, is basically not permitted to do immigration enforcement except in the most extreme cases of terrorists and spies. And that sort of thing. Other than that, illegal immigrants have a free pass.

Leahy: Let me ask you this about Mayorkas. Is his failure to enforce our immigration laws an impeachable offense?

Krikorian: That’s kind of up to the Senate. They could impeach him. The House in the Senate, and frankly, they probably should, but they shouldn’t have approved him in the first place. And anybody who replaces them is just going to do the same thing because this is what the President promised to do.

Carmichael: Mark, is Mayorkas not upholding the law, or is he exploiting loopholes? And the reason I’m asking the question is in a new administration, once he is out of office, could he be indicted for not upholding his oath of office?

It’s not what Mayorkas is doing at Biden’s instruction. So, I mean, potentially, I guess. But I don’t like the criminalization of politics. I think what we need to do, and this is me talking as a citizen, CIS doesn’t get involved in elections, but as a citizen, the solution is to get rid of these guys from office and put in somebody who actually is going to do what’s necessary.

Carmichael: Here is I guess question, and you’re hitting on an excellent I’m asking you something in your responses philosophical in nature, which is appropriate. But if Republicans were to retake the House and have a majority in the Senate, but not 60 and have the presidency, you can’t fix immigration legislation with less than 60 votes.

Krikorian: You can’t fix everything, obviously, because of the filibuster. But the filibuster is protecting us this time. Do you know what I mean? There is a great reason for it. But there’s a lot of smaller things that can be changed that some of them the Democrats may go along with.

You put package deals together. Okay, they get some of this. We get these four immigration loopholes fixed. It’s not impossible. The first thing is, you need to get control of the majorities in Congress and get somebody in the White House.

Leahy: Last question. Are you optimistic or pessimistic about the chances of fixing any of this over the next three and a half years?

Krikorian: Oh yeah. I mean, pessimistic isn’t a word. There is zero possibility of any of this getting fixed.