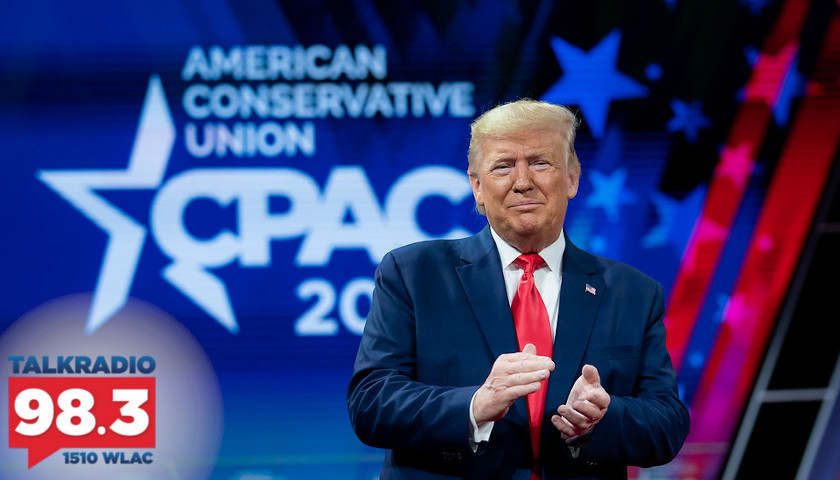 All Star Panelist Roger Simon Reflects on Being a Journalist at CPAC and the Cancelling of Dr. Seuss

Live from Music Row Tuesday morning on The Tennessee Star Report with Michael Patrick Leahy – broadcast on Nashville’s Talk Radio 98.3 and 1510 WLAC weekdays from 5:00 a.m. to 8:00 a.m. –  host Leahy welcomed the founder of Pajamas Media Roger Simon to the studio to discuss the energy and reception at CPAC and how Dr. Seuss is the recent victim to fall prey to the cancel culture.

Leahy: That was Donald Trump talking about the generally sixth event. In-studio Roger Simon my former boss at PJTV now a columnist at The Epoch Times. And of course, Andy Ogles mayor of Maury County in the studio with us. I want to ask you this question, Roger. So you’re with The Epoch Times. It seems to be the juggernaut of conservative reporting these days supplanting, the old staple like National Review and The Wall Street Journal. What was it like being a journalist at CPAC for The Epoch Times?

Simon: Well the bottom line is what journalists need is access. You want to be the one to interview a Mike Pompeo or someone like that. And to be with The Epoch Times now, it’s simple. they all want to be on The Epoch Times. And the reason is that it’s the only kind of serious newspaper online and in your mailbox on the right anymore because The Wall Street Journal sort of deserted it. So we’re growing like crazy. And I can tell your listeners here if you haven’t subscribed be there or be square as we used to say.

Leahy: So who did you interview down there?

Simon: Oh, I talked to all of them Jim Jordan. All of them. My job is not to do that. That’s (Inaudible talk) job who had the video.

Leahy: You do the reporting. You are actually a commentary.

Simon: I’m the wise guy who gives you the sense of the ‘room’.

Leahy: So Andy, let me tell you why Roger Simon is a wiseguy. Like one of the other people in this anti-lockdown party in our studio today he’s an Ivy Leaguer. He went to Dartmouth. Dartmouth is in the news today.

Leahy: You’ve got to tell our audience about this.

Simon: We all love the cancel culture. Anyway, who’s your favorite children’s author? Well, chances are if I would say 50/50 it’s Dr. Seuss. Have you ever read Dr. Seuss to your kids? Anyway, Dr. Seuss was just canceled. Six of his books have been rescinded by the publisher. So I don’t know which ones I haven’t read the full article yet, but I hope…

Leahy: Was it green eggs and ham?

Simon: I hope it’s not If I Ran the Zoo said Gerald McGrew because I love that one.

Ogles: But anyway, I do think that is one of them, but I mean, we’ve lost our collective minds. Mr. Potato Head. It’s not inclusive enough?

Simon: Who donated the copyrights to all his books in his will. He’s dead. And there are the guys at Geisel School of Medicine at Dartmouth and it was a lot of money he gave him.

Leahy: He gave the rights to Dartmouth.

Ogles: Again, we’ve lost our minds. This cancel culture of inclusivity or non-inclusivity. I mean look, if you are a dude and you want to wear a dress, wear a dress. I don’t care. But you are still a dude. (Laughter) I’m sorry. That’s the way God made you. And maybe that’s the problem that you don’t have a relationship with God and you need to get woke with yourself. If you want to get woke read scripture follow Jesus and be woke. But at the end of the day, I’m not going to hold your hand and pander to you because you’re a dude in a dress. You’re still a dude.

Simon: But it is something that Michael said that occurs to me that it’s Dr. Seuss who came up with green eggs and ham. The left should love him.

Simon: There may be a guillotine here in 15 minutes if we go off the air. (Laughter)

Leahy: If there is dead air when the show opens at 5:00 a.m. tomorrow morning you’ll know what happened. So I want to go back to the CPAC adventure. It’s interesting what you said as very upbeat. Now, why do you think it was upbeat? And where do you think that leads us?

Simon: Well, I think that part of the reason is up rate is that Trump is absolutely back. And he looked really good physically. A lot of people on the comments section of my Epoch Times piece were saying how much weight he lost.

Simon: Yeah, but I think that dominated the whole thing and I think people have sort of figured out that the left has really overstepped and because they have overstepped it’s time to take things back and to get things on. And also it’s time to get on some of these wishy-washy Republican officials in our state and other states. One of the great things is DeSantis’s state. Everybody was saying that DeSantis should be the template for Republican governors across the country. And I really agree. How do you feel?

Ogles: Absolutely. I think DeSantis has done a great job managing COVID and defending liberty. Early on in March and April when we were all terrified he took action. But as soon as the data said otherwise, he reversed those actions and that took real courage.

Simon: The other thing that was true about CPAC is that Fauci became a curse word. (Laughter) Quite literally at the Reagan dinner Larry O’Connor who was the host.

Leahy: Larry O’Connor used to work for Breitbart and is now with the WMAL in Washington D.C. doing a great job in the afternoon.

Simon: He does a great job on the radio. But he is a funny host and he used Fauci as a replacement and as the new F-bomb. (Laughter) Fauci you!

Simon: I won’t go on with the whole thing.

Leahy: We might get in trouble. We don’t want to do that.

Simon: We don’t want to go off the air before they cancel us.

Leahy: What’s interesting to me Roger is I think people had a lot of fun down there.

Simon: They did. I mean, I kept saying, When can I go outside? It was 80 degrees out there. But aside from that it was great and everybody was super friendly. Another interesting thing about what’s happened with CPAC is that there now is a Korean CPAC, French CPAC, and various others.

Leahy: In those other countries?

Simon: Yes, and they had videos of their events that were shown to us. CPAC as a movement is spreading globally as the conservative movement of the kind of Trump direction it’s going. The populist direction is spreading. It’s very heartening.

Leahy: Of the speakers there, which one’s got other than Donald Trump, of course, who capped it off with an hour and 20 minutes. It was very well received. Which of the speakers also were received with that same level of enthusiasm?

Simon: The same level, no one. But I would say very high-level was Kristi Noem. What’s interesting to me about her is she’s a really good public speaker. And she knows how to underplay lines like an actress. And I come from that world so I watch that. She underplays everything just well. She said very quietly like to the audience. I don’t know if you agree with me, but I think Dr. Fauci makes mistakes a lot.

Leahy: She knew how to play it. She knows how to deliver a line. And she knows pacing.

Simon: Yes. She knows the line’s good. Don’t scream it.