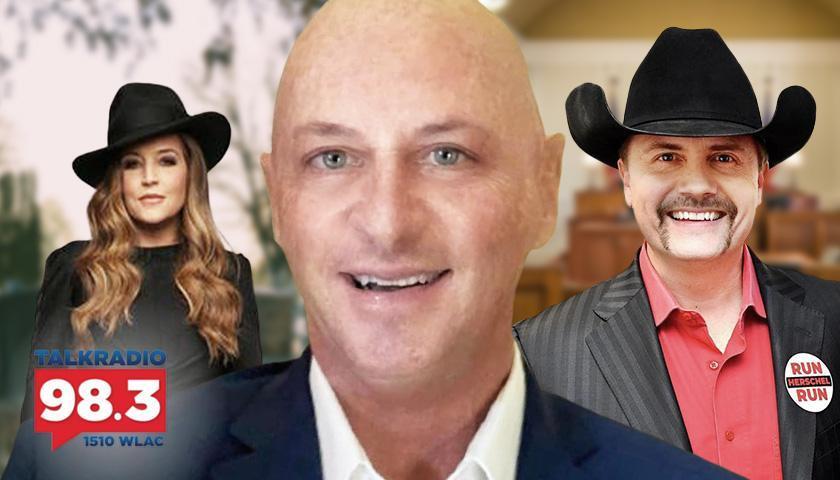 Chapman: Good morning. Hey, at what point does my lofty position allow me to actually get into the garage when I get here?

Leahy: (Laughs) At the crack of dawn?! There are only a few spaces.

Chapman: I’m not there yet.

Leahy: You’re not there yet.

Chapman: A boy can dream.

Leahy: A boy can dream. I wanted to talk to you a little bit about the passing of Lisa Marie Presley.

Leahy: Very sad. And you’re in the music industry, and you have some insights. Let’s begin with the following. Did you ever meet Elvis Presley?

Chapman: I did not. I have a lot of friends that played in the band and sang background that knew him very well. I feel connected to it. Like the first gig I had when I came to town, I played pedal steel for the Rambo’s. Dottie Rambo was one of his favorite singers. She sang at his funeral. So I feel very connected to it. But, no, I never actually personally met him.

Leahy: But his music, I assume, like pretty much everybody in America, his music influenced you.

Chapman: No, that’s unavoidable. If you’re breathing, his music influenced you.

Chapman: In passing, yes. I don’t feel like I knew her well at all, but yes.

Leahy: Where did you meet?

Chapman: I would have to think back. Good grief. It was one of those industry things. It was absolutely surface, no depth whatsoever.

Leahy: One of those industry things.

Chapman: You know. I can pull one out of the air if you want. It was at the Grammys! (Leahy chuckles) I don’t know.

Leahy: Are there so many industry things that they just kind of blur together?

Chapman: It’s all just one thing because it’s always the same thing. Pretty much. I’m sorry. It all gets boring to me after a while. I’m easily distracted, and they don’t do it. But hey, don’t miss the Grammy Awards! (Leahy chuckles)

Leahy: Are these all the same?

Leahy: What is getting worse about these awards?

Leahy: Is that possible?

Chapman: It is. More and more depth to the realities around them. More and more woke, more and more annoying to a guy like me. And it’s not because I’m some old man screaming, stay out of my yard.

Leahy: Get off my lawn!

Chapman: I’ve got a core, which if I’m living the way I should be, is Jesus. Everything in my core says, good grief, you’re wasting your time watching that crap.

Chapman: He did. Which is awesome.

Leahy: He had told folks that he would not perform during the COVID pandemic and the lockdowns and all that sort of stuff. He basically told all the concert promoters he wouldn’t perform anywhere where they required somebody to get the shot.

Chapman: Do you know why?

Leahy: Tell me why.

Chapman: He is arguably one of the smartest people in this town first of all.

Leahy: He’s a really smart guy, that’s for sure.

Chapman: And he has a soul, and he knows the Constitution as well as anyone ever elected to office, I suspect. And he knew what was happening. He’s not an idiot. And he said no because he’s got… can I say this?

Leahy: I know what you are going to say.

Leahy: (Laughs) He told all the promoters, this one promoter, after he signed a contract, put this requirement that you had to be vaccinated, and he canceled the tour because of that.

Chapman: He would do that.

Leahy: And he got sued and he won in court.

Chapman: How about that?