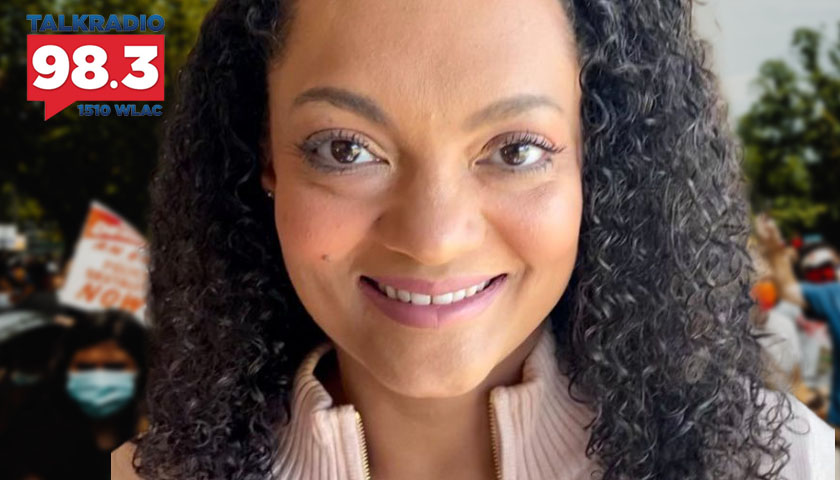 Leahy: We are joined now by Gabrielle Clark who is a Nevada mom with quite a story to tell. Good morning, Gabrielle.

Clark: Good morning, Michael. How are you this morning?

Leahy: Well, I’m delighted to have you on, although I am sorry to hear the circumstances in which this arose. Tell our audience what happened with your son and with the school that he attends and what the resolution of that has been.

Clark: Thank you for having me on. Unfortunately, this is happening all over the country. At the beginning of this year, he’s going to Democracy Prep at the campus here in Las Vegas, Nevada, the charter school. And at the beginning of this year, he was instructed to do an assignment where he had to list all of his identities and then attach signifiers to them of oppressed or oppressor. And I did not think that was okay. I think that is compelled speech. And we took action.

Clark: I am biracial. My mother is Black and my father is white.

Leahy: And your son?

Clark: We will not stand for it.

Leahy: So he was in his class. What does the teacher say? Did he refuse to do the assignment?

Clark: He refused to do the assignment. And when I got involved, he had already had some interaction in the classroom. Virtual learning, of course, at the time. And it was not good. It was a complete violation of his civil rights. And he refused. And by the time I found out, I stood behind my son.

Leahy: So he already refused before you knew about the assignment, right?

Clark: Yes, he did. He knew that that was wrong.

Leahy: He’s got a good head on his shoulder’s it sounds like.

Clark: He does, indeed.

Leahy: What has happened subsequently? This happened was in February?

Clark: No, that happened in September.

Leahy: In September. So walk us through the process then. What happened after that?

Clark: So that happened in September. I followed the chain of command to get relief to opt out of this assignment. I opted out of this class. And we were not granted release so we took legal action. We filed our lawsuit in December. And last month, the school conceded on all of our demands, and my son will be graduating.

Leahy: Congratulations to you for standing up. Did your legal fees hit the roof on this?

Clark: My legal fees did hit the roof. Part of the reason why nobody fights and nobody stands up to this kind of tyranny is that the legal expense is great. And we are still collecting donations on Givesendgo.com/supporttheclarks. And through no left turn in education at Noleftturn.us. You can look at the lawsuit and look at all of the media.

Leahy: If people want to make a contribution to help cover your legal fees, where exactly do they go again?

Leahy: And by the way, you had a good lawyer. Obviously, since you won and the school conceded, the legal fees must be approaching $100,000. I would guess.

Clark: It has been a very intense process. But that is what these kinds of programs depend on. They depend on people not being allowed or not being able to fight back. And their inability to fight back is what has been allowing this type of indoctrination to continue in the country.

Leahy: $200,000. plus in legal fees just so your son doesn’t have to confess to being white and being an oppressor. You’re kidding me?

Clark: I am not kidding you. Unfortunately, these are the proponents of critical race theory and this kind of indoctrination. It is fueled by people’s inability to fight back.

Leahy: That makes an awful lot of sense. Tell us about your son. He’s graduating from high school next month.

Clark: Yes, he will be graduating.

Clark: William is an aspiring EDM producer, so he will be continuing his education in sound engineering.

Leahy: Great. Is there a college for that, or do you go to a specialized program for it?

Clark: We’re still looking at colleges right now. Unfortunately, part of this situation was that we were at a standstill on our effectiveness in attaining scholarship and that sort of thing. There are long-term effects of having to fight this.

Leahy: Sure. I don’t know if, you know, here in Nashville, we have a great music business college called Belmont. Have you heard of Belmont University?

Leahy: Just check it out. Belmont University. Nashville is the Center of the music industry, as you know, and they have a terrific program there, and lots of kids from around the country go there. I would encourage you to look at Belmont University and come on down to Nashville because we’re a nice place here.

Clark: We will definitely take that into consideration. All of our college application options are centered around the best program for William.

Leahy: Southern Cal has a pretty good one or UCLA, I would guess. How long have you lived in Las Vegas, Gabrielle?

Leahy: Other than this incident, what has that experience been like for him?

Clark: Well, up until this year, we had a positive experience here with this particular school. I did notice that there were some things that I wasn’t comfortable with. But we had always been able to communicate our concerns and they’d be heard. But on this particular issue, it fell on deaf ears.

Leahy: Do you think that this is just the fact that you had a good experience for a while and then this last year with its critical race theory craziness kind of coming on like a tsunami across the country? Do you think there’s a general change in schools around the country that are forcing more and more kids to bend their knee to critical race theory?

Clark: That is absolutely what has gone on. And for anyone out there, you need to stand up. You need to stand up for your children and reach out. I reached out to Elana Fishbein at No Left Turn in Education, and she found lawyers for me, and we were able to press forward.

If anyone out there is having a problem, you can go to Noleftturn.us. Or you can go to Facebook for their National chapter. Or you can go to a state chapter. We have chapters in about 20 states, roughly. And if there is not one in your chapter, then get with Dr. Fishbein and you can start a chapter in your state.

Leahy: Also, Gabrielle, have you had a chance to talk with the folks that America First Legal? They just set up this legal team that helps fight against critical race theory. This is the former Trump administration guy Steve Miller who is putting that together.

Leahy: Well, that would be a good group for you to talk to because they want to get critical race theory stories as well. Gabrielle Clark, you are a hero. You are brave. And thank you for standing up. And we really appreciate having you on and very best of luck to your son William, as well.

Clark: Thank you so much for having me.

Leahy: Great to have you on. Gabrielle Clark, a brave mom fighting critical race theory in Las Vegas, Nevada.