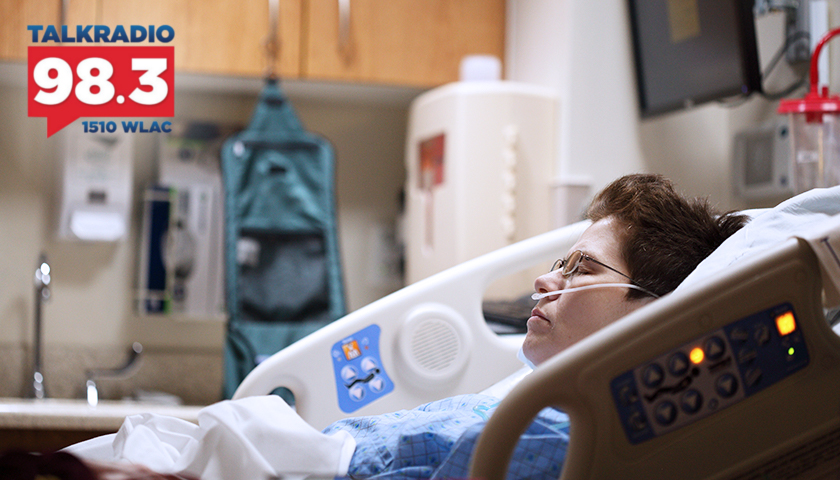 Live from Music Row Wednesday morning on The Tennessee Star Report with Michael Patrick Leahy – broadcast on Nashville’s Talk Radio 98.3 and 1510 WLAC weekdays from 5:00 a.m. to 8:00 a.m. – host Leahy welcomed the original all-star panelist Crom Carmichael to the studio to discuss the Tennessee Department of Health’s announcement that fully vaccinated COVID-19 persons will not receive the monoclonal antibody treatment.

Leahy: We are joined in studio by the original all-star panelist Crom Carmichael. Crom, good morning.

Leahy: I’m going to need your help, Crom, unraveling this mystery. And it makes no sense to me as most of the things going on with the Biden administration.

But this is in particular what’s going on with the Tennessee Department of Health as well. So, are you ready to put on your mystery-solving hat?

Leahy: So you may recall that I’ve talked a little bit about my personal game plan for COVID-19.

Leahy: I do not have COVID-19. I have never had COVID-19. I’ve gotten the Pfizer vaccine. Both shots.

Carmichael: Good for you.

Leahy: But everywhere you look, there are breakthrough cases of COVID-19, right? People have got their shots and they get COVID-19. I’ve told you what my plan is. My plan has been okay.

If I test positive, I will follow the best recommendation of doctors, which is to go immediately and get a monoclonal antibody treatment if my provider would do that.

Carmichael: You have said that yes.

Leahy: Many a time I’ve said that. I don’t know about many of the time.

Carmichael: But you’ve said it.

Leahy: I’ve said it on air.

Leahy: Privately, I said I told everybody that’s my plan, everybody. Because I know you’re waiting to know what my plan is. Why? Because you have to have your plan. So here’s the thing, Crom. Headline.

Our lead story this broke last night and everyone is scratching their head about it. We’re going to have State Representative Scott Cepicky on at 7:30 a.m.

He’s going to help unravel this and get his thoughts on it. Here’s the headline. Tennessee Department of Health says Vaccinated Not Recommended for Monoclonal Antibody Treatment. Now, why is that?

Carmichael: Why do you have to be recommended anyway?

Carmichael: What are the National Institute of Health guidelines?

Carmichael: Yes, what are they?

Leahy: While there are currently no shortages of these monoclonal antibodies, by the way, on September 3, a week later, Biden announces rationing of them.

And so far, as far as I can tell, Regeneron and Eli Lilly make these items and they’re purchased from them by the federal government. And then they distribute them.

Carmichael: Only? Is that the way it’s always been?

Leahy: I’m trying to figure this out. This is a new treatment just recently approved by the FDA.

Carmichael: It’s never been that way.

Leahy: Actually, in this particular instance, as far as I know, and we have a call into Regeneron. Right now during the break, I called them and I said, we want to know if a private hospital went to you and said, we want to buy some monoclonal antibodies would you sell it to them?

Carmichael: Or if a pharmaceutical distributor.

Carmichael: It’s not anybody. The pharmaceutical industry operates in the similar way to the liquor industry.

Carmichael: Through distributors. And you have to have an account set up. You have to be vetted. I’m not trying to defend anything.

Leahy: No, no. This is why you are the original all-star panelist. Knowing these details is very important.

You have to have a license, for example, to sell alcohol. You can’t just be a retailer and open a store. You have to go through a process and a doctor or a hospital or a pharmaceutical has to have a license in order to issue drugs that are covered by the FDA. In other words, they’re not over the counter.

I’m not trying to defend anybody. I want to explain this. As far as I know, pharmaceutical products are purchased by distributors. And in the case of Walgreens and CVS or the great big ones, they might have a company-owned distributorship.

Leahy: Or some of the larger hospital chains.

Leahy: Let me go with this guideline. It’s called the COVID-19 Treatment Guideline Panel. It’s from the National Institute of Health. We are on September 22nd. This was issued 19 days ago on September third.

While there are currently no shortages of these monoclonal antibodies, logistical constraints or Biden’s administration policies can make it difficult to administer these agents to all eligible patients in situations where it is necessary to triage eligible patients the panel suggests prioritizing the following groups over vaccinated individuals who are expected to have mounted an adequate immune response.

But how does the Tennessee Department of Health Commissioner Lisa Piercy interpret these rules? This is their quote from The Epoch Times story via The Tennesseean.

“The emergency use authorization of these monoclonal antibodies is only for people with these conditions, and it has been the same since day one. The new thing is the NIH criteria. What we just read to you was released on September 3. Even if you have those conditions, but you’re vaccinated, you don’t get it now.”

That’s not how I read the NIH guidelines.

It doesn’t say you don’t get it if you’re vaccinated. The guideline says that you’re not on the top priority. It doesn’t mean you don’t and also, it says it is your provider who makes the decision.

That is your health care provider. But nonetheless, Bill Lee’s, Commissioner of Health, is saying, you can. She just said it in this quote. You cannot get monoclonal antibiotic treatment if you’re vaccinated.

Carmichael: Let me ask a back question.

Carmichael: What’s the name of this person?

Leahy: No, she was not the previous commissioner of health. She was like, two layers down. She was in charge of immunization. It was the same type of thing.

It had to do with vaccinations and what the government policy had to do with that lower-level bureaucrat’s interpretation of the mature minor policy as it relates to vaccinating kids without the approval of their parents. A different deal.

Leahy: It was COVID related.

Carmichael: What I’m saying is that the other person got fired for trying to micromanage an area of COVID and requiring people to essentially bend the knee to that opinion or whatever it was. And got pressure for that or they got fired.

Leahy: Not exactly. It’s Michelle Fiscus, I think, was her name. There were multiple reasons why she got fired, according to the department of health.

One of them had to do with a bad work environment. The other was she without proper vetting and set forward a state policy that the legal counsel had not approved.

Carmichael: Beurecratic overreach.  Would that be a sufficient description? I’m asking that because what you have told me also appears to be a bureaucratic overreach. We’ll continue this after the break.