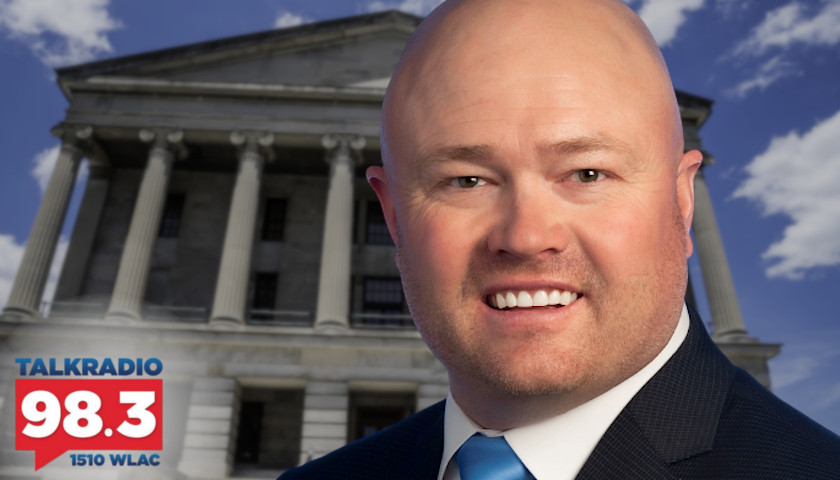 Tennessee State Rep. Rusty Grills Talks Legislating from His Counties in the ‘Front Porch of Heaven’ and Maintaining Freedom

Live from Music Row Tuesday morning on The Tennessee Star Report with Michael Patrick Leahy – broadcast on Nashville’s Talk Radio 98.3 and 1510 WLAC weekdays from 5:00 a.m. to 8:00 a.m. –  host Leahy welcomed Tennessee State Rep. of District 77, Rusty Grills, to the newsmakers line to discuss his background growing up on a farm and his two bills dealing with farm protection and a bill that repeals the civil asset forfeiture bond.

Leahy: We are joined on our newsmaker line by state representative Rusty Grills who’s from Newbern which is in the northwestern corner of the state. He’s a vice-chair of the agriculture committee. Welcome to The Tennessee Star Report.

Leahy: Good. So are you in town for this meeting of the general assembly?

Grills: Yes, sir I sure am. I got here yesterday afternoon.

Leahy: That is a bit of a travel isn’t it?

Grills: It is. But it’s a perfect opportunity to catch up on phone calls and make some of the little decisions you have to make for a week. And set some things up and have the opportunity to talk to different folks. So really the time flies by when you’re driving in.

Leahy: Tell us a little bit about Dyer, Lake, and Obion Counties, in the northwestern corner of the state. How would you compare that part of the state to other parts of the state?

Grills: It’s like all of Tennessee. It has its regents that live there. But you know, I like to think it’s the front porch to heaven.

Leahy: That’s a good line. The front porch to heaven. Where are Lake County and Dyer County and parts of the Obion County?

Grill: That’s right about two-thirds of the western part of Obion County.

Leahy: Why is it the front porch of heaven there?

Grills: I live in a farming community. I’m actually a full-time farmer by trade. I’m a ninth-generation farmer. So that’s a unique job title for a representative or politician. But I was raised on a farm for a living. And generations passed a farm. Not only that but everybody in my community pretty much a farmer and that’s the number one industry for that part of the world and we know it’s a little different than it is here. A little flatter. We still have the Rolling Hills. In the fresh green grass and the fresh and clean air. It’s a good small community where everyone knows each other. And if you’re on the side of the road with a flat tire, you don’t have to worry about somebody stopping to try to help you.

Leahy: State Representative Rusty Grills, how big is your farm?

Leahy: 3,000 acres. Let me just tell you, I come from dairy country in Upstate New York, and actually, my Grandfather had a farm in Hemmingford Quebec. We still own two acres of the farm. We sold that off in 1970 when my grandfather passed away. But that farm was a dairy farm. It only had a hundred acres. When I hear somebody in Tennessee say they’ve got three thousand acres I go. Wow! What do you grow there?

Grills: Primarily row crop. We do have some cattle, but I’ve got rid of my cattle because it’s too hard to be up here and take care of cattle throughout the winter. But corn, soybeans, wheat, or triticale. Those are the primary crops we grow.

Leahy: What’s the market like for a farmer? What are the economics of being a farmer today?

Grills: Lots of capital and you make it only make money on the margins. It’s like anything else. you have to manage it correctly. And you know, I feel I feel like it’s a wonderful opportunity to raise a family and it to be close to your family. And that’s the biggest positive for me. Other than the fact of being raised on it. When I was young four to five years old, I was in the field every day. There are pictures of me driving a tractor way before some of these people on the talking heads on TV think it was it was appropriate for you to be driving a tractor.

Leahy: We won’t tell them. (Chuckles)

Grills: Everybody is looking for a way to get their feelings hurt now.

Leahy: So true. So true.

Grills: I’ve been married for 15 years this coming Thursday to my wife. And we have two daughters. Four of us with children. My mom and dad raised us in a conservative Christian home. So with that, you know, I had the opportunity to you know, spend a lot of time with family and to develop a close bond with them. So I feel like I’m blessed in many ways and we didn’t have the financial blessings that a lot of people may have had but we had a lot of other blessings that others would want. You can’t have it all but what you can’t have you are grateful for.

Leahy: Sure. So I’ll get you your committee assignment on agriculture in a bit. I noticed I’m looking at the bills that you personally are sponsoring. There was one I thought about and what really caught my eye which basically is out there that says that in an emergency of the Tennessee Emergency Management Agency cannot force or impose unlawful restrictions on the operations of churches. Tell us about that.

Grills: The goal of this legislation is just to protect churches and make sure liberty and that the religious freedom that we are guaranteed by the Constitution is not infringed upon. Who would have thought that Gavin Newsom from California with churches down, but he tried. I always want to call him Mario Cuomo from New York. I guess you remember him.

Leahy: I remember the late pious Mario and his son Andrew.

Grills: Well, you know, then you got Andrew up there that wanted to do the same thing. Governor Lee obviously did not have the same does not have the same political mind that those liberals do. However, I actually talked to Governor Lee. This is in no way shape form or fashion to stick a finger in his eye or to be to do anything that might be against Governor Lee he did not shut churches down here in the state. I think that was great.

But when you never know what Governor Lee may have coming in the future or knowing what pandemic or you know extreme circumstances. I just don’t believe that the governor by the stroke of a pen should be able to stop religious services. Everyone is worried to death about their their physical well-being. But at the same time, our spiritual well-being is important because it has eternal value. So we need to make sure that our churches have now the doors open and willing and ready to allow congregations to meet.

Leahy: What’s the status of that bill?

Leahy: Also, is there a companion bill in the state Senate?

Grills: Yes, sir there sure is.

Leahy: Who is sponsoring that? Do you know?

Grills: There are several. Janice Bowling and you get Joey Hensley. Some of those rocks whenever it comes to a conservative legislation that you can depend.

Leahy: Do you personally have other legislative priorities beyond that bill? I actually have I have a farm protection bill. We have a huge problem with agriculture vandalism over in West Tennessee and across the river counties. We have a huge problem with you know, with had bales of cotton been burned. We’ve had individuals taking metal shavings and pouring down the hydraulic reservoirs of tractors.

Leahy: What! Why are people doing this?

Grills: Well, they don’t have anything else to do on Saturday night. So what are they doing it so go burn some cotton barrels. I’ve personally have had a trailer truck set on fire.

Grills: We don’t know. I know some of the people that have done it. I don’t want to call them agitators potentially but these are people that are vandalizing farms.

Leahy: Do they live in your area or are they coming from someplace else?

Grills: Most of the time they live in the area. For instance, they’ll take the wires off of a pivot. I’m not sure you know what a pivot is but it’s an irrigation rig and they’ll strip the wire.

Leahy: I’m glad you explain that to us because you did not embarrass me by having me show my ignorance of what a pivot is. Thank you.

Grills: But they’ll what back up to a pivot with a pickup truck tire chain to the wire and take off with a pulling the wire off the pivot then they’ll roll of wire up take and it home and melt the plastic off of it and take the copper out of the wire and go sell it at the scrapyard.

Leahy: Oh, so these are criminals then.

Grills: That is correct.

Leahy: Wow! When you were growing up was just sort of stuff happening?

Grills: Not like it is today. And as as as prices go up for for scrap metal those things become more regular. Thoe are just a few things there that were working on. I also have a bill that repeals the civil asset forfeiture bond. I don’t know if you’re familiar with that.

Leahy: Yeah, that’s a great idea by the way. I love that idea.

Grills: Looks like we’re getting looks like we’re getting some traction on that. I believe we’ve got it right at 40 co-sponsors, which I’m pretty proud of that. I feel like that’s moving forward a little. We’re going to get that passed here in the next couple of weeks and over in the Senate Frank Nicely has that.

Leahy: We know Frank. He’s a great guy. State Representative Rusty Grills, thanks so much for joining us this morning. Will you come in studio sometime when you have a longer conversation?

Grills: Hey, I look forward to it one of these days.

Grills: Keep up the good work.