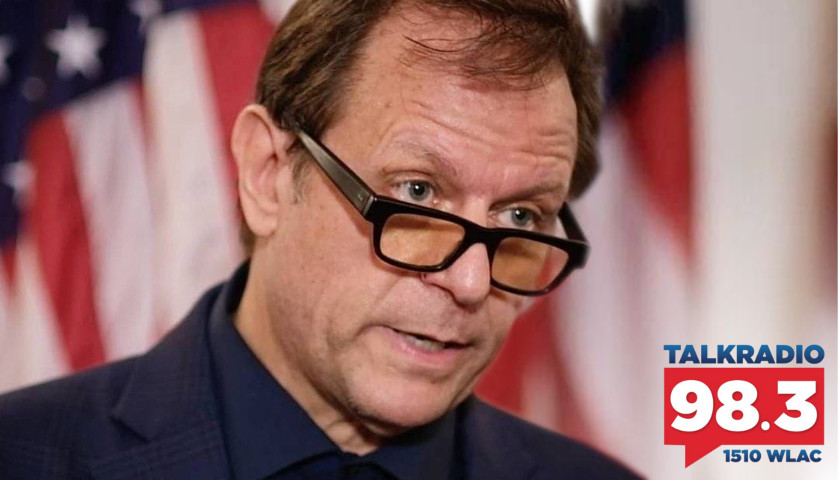 Live from Music Row Monday morning on The Tennessee Star Report with Michael Patrick Leahy – broadcast on Nashville’s Talk Radio 98.3 and 1510 WLAC weekdays from 5:00 a.m. to 8:00 a.m. –  host Leahy welcomed Dr. Michael Rectenwald to the newsmakers line who is the author of 11 books, including Thought Criminal and Google Archipelago.

During the third hour, Rectenwald gave a synopsis of his new thriller Thought Criminal and his experience as a conservative professor. He explained how he was dismissed by NYU for being a free thinker and exposing social justice agendas on college campuses as it is now entirely impossible to be in academia unless you are a leftist.

Leahy: We are joined now on our newsmaker line by Dr. Professor Michael Rectenwald. He was formerly a professor of global liberal studies at NYU from 2008 to 2019. You can find him on Twitter at theAntiPCProf. He’s the author of Thought Criminal, Beyond Woke and Google Archipelago. Welcome, Dr. Rectenwald to the Tennessee Star Report.

Rectenwald: Thank you, Michael. Good to be here.

Leahy: So we have something in common. You are a graduate of the University of Pittsburgh Pitt panther. You got a Ph.D. from Carnegie Mellon in Pittsburgh. I went to high school in Jamestown, New York just about 100 miles north of Pittsburgh. And you probably spent a few summers up I’m guessing at the Chautauqua Institute or know of it, which was near my hometown.

Rectenwald: I’ve absolutely been there.

Leahy: Yep. Great place, although they are so PC these days it’s just unbelievable. You have done some great work. Tell us about your new book Thought Criminal.

Rectenwald: Well, Thought Criminal is a science fiction thriller set in the not-so-distant future in which there is a database called the collective mind and there is a virus that’s been released, the protagonist thinks directly by the state. And the nanobots and then our robot that connects the neurons of the neocortex to the collective mind done controls inputs and outputs therefore of thinking in general. So the idea is to stay free of the virus because we connect you to this database that controls your thoughts. And the hero is attempting to stay disconnected and to retain his own individuality.

Rectenwald: Oh, absolutely. Yeah, Springtime for Hitler is exactly where it came from. And I’m trying to talk about the totalitarian nature of the left and I think that’s become evident by now to just about everybody.

Carmichael: Who do you include on the left?

Rectenwald: Well, ironically I include of course the Democratic Party today who are basically overtly socialist, but also Big Tech ironically, and most of the political establishment in general. But also ironically a lot of corporations are now considered part of the left. And of course, the deep state, or if you will, the intelligence community and the major bureaucracy. So basically it’s the entire social and political establishment at this point.

Carmichael: Now, why do you think that Big Tech and big companies are members of the left?

Rectenwald: Well, I think it’s pretty obvious what they’re trying to do is establish a kind of oligarchy on top with the monopolies basically and nothing else in between monopolies. And the rest of the people effectively are under ‘socialism.’ So it’s a kind of corporate socialism that’s being established.

Carmichael: That’s what he said. And then when he has the right the opportunity to ride a large check and send it to the treasury he demurs. So why do you think Warren Buffett for years has said he wants to pay more taxes, but then never has? Why do you think he has said it for years?

Rectenwald: Well, he’s trying to suggest that the oligarchy is benevolent in that they are willing to extend their largesse to the public. But I don’t think that’s really the case. I think they’re very much set on establishing and keeping their oligarchical position and then effectively dueling out whatever they will to the state and then the state to the people.

So really there’s an ongoing concerted effort to destroy the middle class. There’s no question about it. This is why you have all this socialist ideology coming out of every institution. All of Academia. Almost the entire Democratic Party and Big Tech actually promoting socialism. It’s a very ironic circumstance.

Rectenwald: That’s right. It’s fascism but to the extent that it’s the collusion between the state and these corporations or oligarchs. But international fascism if you will. The only difference is it’s not nationalists, it’s globalists.

Leahy: Professor Michael Rectenwald this is Michael Patrick Leahy again, of course, earlier was Crom Carmichael who’s in here as a co-host every Monday, Wednesday, and Friday. I want to follow up with your own career. You’ve got a fantastic academic background. You left NYU, New York University in 2019. Is it difficult now to continue in the academic world and exercise free thought?

Rectenwald: It’s absolutely impossible. You must be a leftist. There’s no way around it. You have to be a leftist and if you’re not a leftist and you come out basically like I did by criticizing social justice and wokeness, then you’re in trouble. And that’s exactly what happened to me. It’s almost impossible to be in Academia otherwise, you have to hide it. You’d have to completely defect and be a complete socially isolated person and never speak your views once.

Leahy: What’s your plan to combat that personally?

Carmichael: Let’s ask him what happened.

Leahy: What happened to you?

Rectenwald: Well, what happened to me is I started a Twitter account called @TheAntiPCProf and started tweeting criticisms of social justice. And then I was interviewed by the student newspaper where I came out publicly as myself. The Twitter account had been anonymous, and then within two days, I was forced into a paid leave of absence and condemned by a committee called the diversity equity and inclusion group.

Rectenwald: Yeah. And they basically totally trashed my academic career just for making criticisms of what was going on at campuses.

Leahy: So what’s your plan going forward to be an academic public intellectual and make a living in this very different and weird world we live in?

Rectenwald: I’ve created a situation in which I’m basically uncancellable. I write for the Mises Institute and I write books and I live as a public intellectual at this point. I am a completely intellectual entrepreneur. So I don’t rely on any of these institutions for my income because it’s impossible to be a freethinker within these institutions.

Carmichael: I would encourage you that if you are paid to do public speeches that you come up with a number of pseudonyms. (Laughter) You can become an army of 20. They can cancel one speaker and poop you could pop up as another one. (Laughs)

Leahy: Hey, here’s an open invitation when the coronavirus situation improves come on down to Nashville. We will welcome you with open arms and give you an opportunity to speak. And our listeners here on the Tennessee Star Report would be delighted to hear your argument.

Carmichael: And you’ll like Nashville a lot better than wherever you are.

Rectenwald: I like Nashville. My publisher is located in Nashville.

Leahy: I didn’t know about them. We want to meet them. So thanks for letting us know that.

Leahy: Professor Michael Rectenwald, thanks so much for joining us and we look forward to talking with you more.

Carmichael: And meeting him.

Leahy: And meeting you in person.