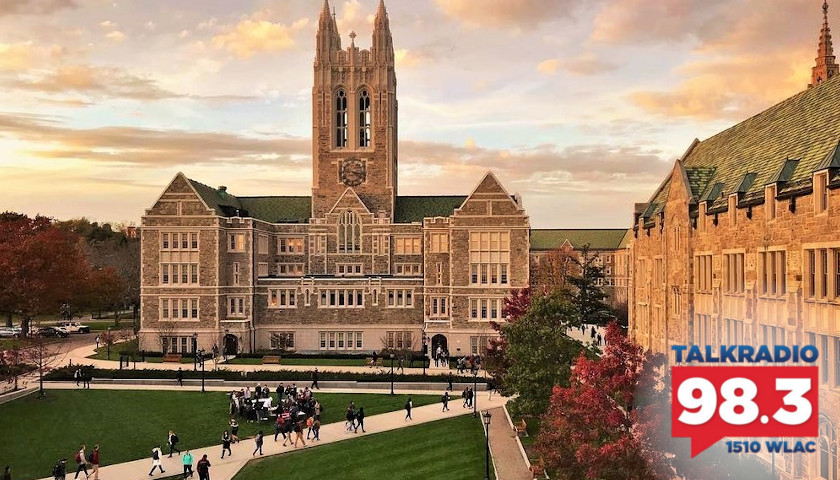 Live from Music Row Friday morning on The Tennessee Star Report with Michael Patrick Leahy – broadcast on Nashville’s Talk Radio 98.3 and 1510 WLAC weekdays from 5:00 a.m. to 8:00 a.m. –  host Leahy welcomed the head of the Network of enlightened Women at Boston College Julia Canzano to the newsmaker line to discuss her experience as a college conservative and her plans after graduation.

Leahy: We’re joined on a newsmaker line right now by Julia Canzano, who is the head of the Boston College chapter of the Network of enlightened Women. Sort of almost behind enemy lines there. Julia, welcome to The Tennessee Star Report.

Canzano: Thank you so much for having me.

Leahy: Well, what’s it like being the head of a college chapter of a conservative organization in very liberal Boston, Massachusetts?

Canzano: Well, it has its challenges. Not everyone on campus agrees with the work we do. We had one incident where we were hosting a workshop about getting more women elected to office presentations on how do you network? How do you fundraise? How do you craft a message for yourself? And I was telling somebody about this and about how we really wanted it to be a bipartisan effort leading up to Election Day.

Leahy: Julia, is it discouraging to be a college student today when colleges are supposed to be where you have a free market of ideas, where people freely exchange thoughts? It looks like most of your peers have no interest in learning something new, but want to just kind of follow a certain left-wing propaganda line.

Canzano: It can be. But I would say, on every college campus, there’s definitely a community of conservative students, whether it’s through groups like the Network of enlightened Women or Boston College Republicans. I’ve been able to find my group of students that support my ideas and usually agree with me, and we’re able to successfully have conversations in the classroom. And while they aren’t always successful with our peers, it doesn’t stop us from having them.

Leahy: Well, that’s great. What year are you up there now Julia?

Leahy: Currently a senior. So what has this last year been like for you? It has definitely been a struggle. It’s definitely not the senior year that I would have liked to have had. Our administration has had to follow a lot of the guidelines that Massachusetts and the city of Boston have put forth. So we’ve had no football games, no tailgates, no special senior events.

They just announced this past Monday about policies for graduation and they’ve said that we’re not allowed to have any guests. (Leahy sighs) So my parents will not be able to attend in person, and it is a bit disheartening. But they’re put in a tough spot with the rules that the state is putting forth.

Leahy: Where are you from originally, Julia?

Leahy: You’re from Florida. How did you pick Boston College?

Canzano: I used to live up in Massachusetts when I was a lot younger, and I have a lot of family up here. So when I was four years ago searching for colleges, it was just something that really appealed to me. But now I kind of do wish I was in Florida back with my family because it’s a much more open state.

Leahy: You are also a contributor at The Daily Caller. Is that right?

Leahy: And how long have you been writing for them?

Canzano: It’s been about two to three months.

Leahy: And what sort of things do you write about for The Daily Caller?

Canzano: Usually it’s whatever stories they pass along our way, whether it’s something big in the news, whether it’s a statement that former President Trump put forth or something that a representative said or it can be as small as kind of local crime that’s happened or small-town stories. We really like to cover the stories that some of the major news networks aren’t covering as much.

Leahy: What are you going to do after you graduate?

Canzano: Hopefully, I would like to work in political event planning, whether it’s with campaigns or nonprofits.

Leahy: That makes a lot of sense. You know, this maybe has never happened to you before but at The Tennessee Star, we have six state-based news sites. And we are opening one in Florida, The Florida Capital Star.

Leahy: Yeah, we really are. And I am going to on-air offer you a job to work with us down there. How about that?

Leahy: We’ll talk about it off air, but I think you’d be great if you want to go back home to Florida, and we have some great people down there. We’re launching The Florida Capital Star next week. So we’ll send you some of the stories and see if you might be interested in it. Other than that, do you intend to go back to Florida or go back to Washington? Where would you go?

Canzano: Ideally, I would like to end up in Washington, D.C. I know it’s where all the politics are. And from what I hear from a lot of people, you kind of have to go and do your time, and then you can go to what other state you want. Either Florida or Washington, DC.

Leahy: Do your time in Washington, D.C. (Chuckles)