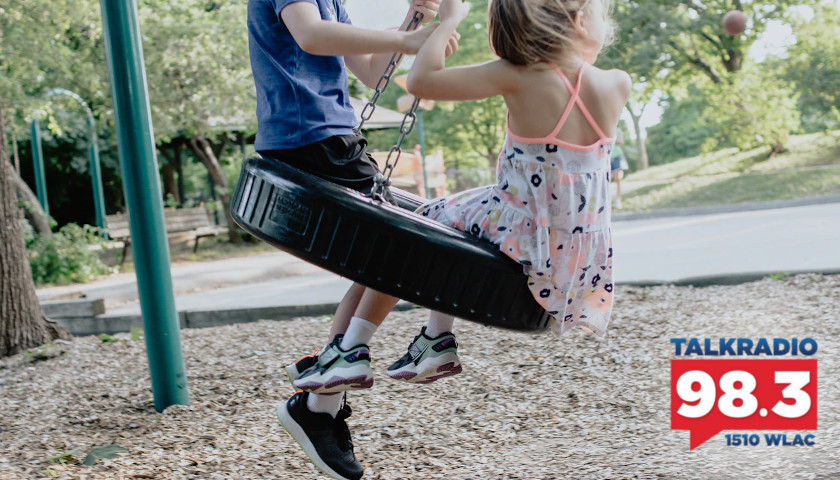 Live from Music Row Tuesday morning on The Tennessee Star Report with Michael Patrick Leahy – broadcast on Nashville’s Talk Radio 98.3 and 1510 WLAC weekdays from 5:00 a.m. to 8:00 a.m. –  host Leahy welcomed Lenore Skenazy, founder of the Free Range Kids movement to the newsmakers line to talk about her background and what prompted her movement.

Leahy: We are delighted to have on our newsmaker line right now. Lenore Skenazy really the founder of the Free Range Kid movement. Welcome to The Tennessee Star Report Lenore.

Skenazy: Well, thanks. I guess I am a newsmaker now? That’s great!

Leahy: You are on our newsmaker line because this is actually pretty important what you’re doing. What you have in common with a lot of folks here is that you don’t like the way our kids are being treated. You made some news. You’re a Yale graduate. Did you get a journalism degree from Columbia after?

Leahy: And then you went to work for the New York Daily News.

Leahy: Very different at the New York Daily News than The Tennessee Star. And the Daily News is kind of left-wing. The Tennessee Star is an honest, conservative, online news site that we own and operate here in Tennessee on the web at Tennesseestar.com now. So you left there. You went to The New York Sun, and you wrote this column. Your son was, what, nine years old the time?

Leahy: And what was the controversial column you wrote.

Skenazy: I must have written 2,000 columns in my life. But the only one that I’ll be remembered for is why I let my nine year old ride the subway alone. That was the column (Leahy laughs) that really somehow caught fire, ticked off a lot of people. And two days after I wrote the column, I was on The Today Show, MSNBC, Fox News and NPR. It’s sort of like being in The Tennessee Star and The Daily News defending myself.

And that weekend, I started a blog to explain a little more because I got the nickname America’s Worst Mom, because I let my son do something on his own. And I really wanted to explain that I love safety. I love helmets and car seats and seatbelts. And I believe I want my kids outlive me. And nobody thought that because I let my son do something by himself. So I started the blog Free Range Kids to say, look our kids are a lot smarter and safer and stronger than our culture, gives him credit for. and the nine-year-old is 23 as of Monday.

So I’ve spent a lot of time thinking about how we got to this point where we don’t think our kids are capable of doing anything that we did when you were young. And it just sort of drives me crazy. And that’s been the mission for 14 years. But a few years ago, I started a nonprofit called Let’s Grow. And the goal is the same. Just to give kids back some freedom and give parents back the right to take their eyes off their children without this being considered a crime.

Leahy: So your then nine year old son survived that trip on the subway alone. Now he’s 23. How’s he doing?

Leahy: We’re about the same age. I’m a little bit older than you, but when I was a kid, I would get up in the morning. I lived in a little small towns in upstate New York, and I would get up in the morning, in the summer, I’d ride my bike down about a mile and a half to the playground. I would play baseball and basketball all day. And then when the sun came down, I’d ride my bike up the hill and be in before sunset. I did that every day for years and years and years in the summer. That was fun.

There is this whole sort of lack of belief in kids in our community that has sprung up. And the reason I get up to write the same story and think about the same issue 14 years on is that it’s wrong, right? It’s not that our kids can’t do this. It’s not that our kids would be less safe than you going a mile and a half to play baseball or basketball at the local park.

Leahy: Yeah. Let me continue on that, because I haven’t thought I want to invite you to think about something. What we would do is you’d go down to the playground and whoever showed up, they would self organize a game. They play baseball. Maybe it’d be five on five, maybe seven on seven. But you organize yourself and they worked out great. You learned how to interact with your fellow kids without having an adult there to monitor everything and intervene in it. And you developed independence.

Skenazy: You’ve summed up basically the mission of Let Grow in that one sentence, which is that with your independence, you learn how to interact with others, how to become a leader, how to change the rules if you didn’t like it. That’s called democracy. You learn how to communicate. If there were some older kids, you held yourself together because you wanted to be like those cool kids. The 12 year old when you were 10 or seven.

And if you were 12, and you were with a seven-year-old, you learn a little empathy because you weren’t going to slam the ball at them, right? They were little kids. So you learned how to be an adult and how to be responsible and how to be empathic. So I just have to say, so Let Grow the reason I started Let Grow after doing Free Range Kids for 10 years was that, you know, talking about all this made people nostalgic or they made people sad or angry or thoughtful. But it didn’t change anything.

When I started Let Grow, which I started with Jonathan Hi, who wrote The Coddling of The American Mind, and a couple of other wonderful people and we decided that we would try to change the culture back to what you’re talking about but through action. And one of the actions that we have is that at school, we encourage them to start what we call Let Grow Play Club, which is really the moral equivalent of just having kids at school before or after school, playing mixed ages, no electronics, nobody’s organizing the games or solving the arguments.

And that’s because we’re worried that they weren’t learning the things you just talked about. How to deal with each other. How did we get to have fragile kids? How do we get to have kids who are so easily hurt or offended, and so many kids dealing with mental problems? It’s because they never had the chance to build up the where with all that you get from being angry at your friend and then having to get over it so that you could keep playing.

Or being mad that you thought that I fouled or you that I thought that you fouled. But okay, we got to continue on from there. If you have somebody, as always, an adult, intermediating and say, and making these decisions for you, you don’t learn how to how to deal with life. And I think we’re seeing that on campus now. And so really, Let Grow was founded to give people back what you got automatically.

It’s sort of like giving people back whole wheat in their bread. We took it all out. We thought we’re making it better, better, better. And then finally we realized, like, oh, no, actually, some of what we took away was really necessary for growth. So we called it Let Grow. So that’s it. We’re trying to get it back and not just the free flight time.

We’re also trying to give them time to run an errand and to be outside and to do something on their own. And not every second has to be supervised or organized by an adult. The idea that the only time a kid is learning something valuable is when they’re in a class or when they’re taught something by an adult also is insulting. Because you were just talking about what you learned. Even I bet you learned something even from riding to the game, right?

Leahy: Oh, absolutely. You learned how to not get killed going down the hill, right?

Skenazy: And those things sound silly, but those are extremely important skills. Timing. Holding yourself together, figuring out that you could handle something if you fell off your bike. I read an article in The Wall Street Journal recently about a mom who loved her childhood and wanted to give the same childhood to her kid.

And when she was eight, she used to go to the creek in her neighborhood and just poke around and throw rocks and look at little crabs or whatever. And so when her daughter was eight, she said, I’m so grateful now, because there are these watches that you can clamp on a kid’s arm that are like little trackers. And so she let her daughter do the same thing and take her bike.

Leahy: And had a little bit of independence.