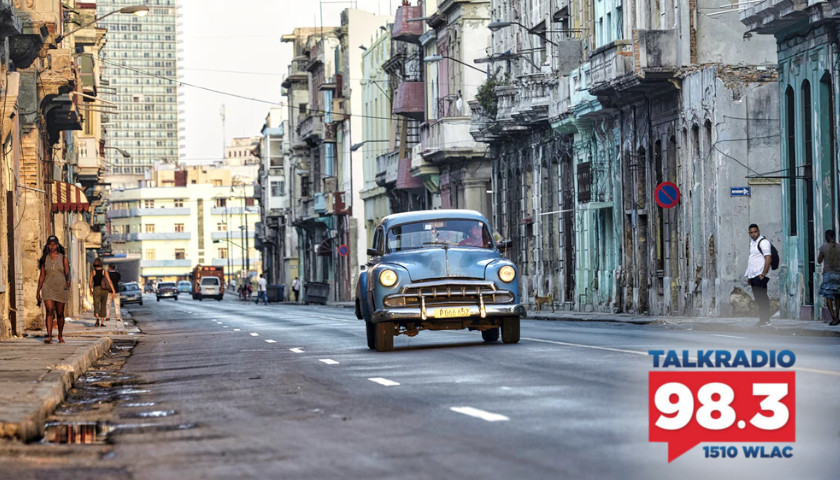 All Star Panelist Roger Simon on His 1959 Trip to Cuba: ‘Communism Is Not Communistic’

Live from Music Row Thursday morning on The Tennessee Star Report with Michael Patrick Leahy – broadcast on Nashville’s Talk Radio 98.3 and 1510 WLAC weekdays from 5:00 a.m. to 8:00 a.m. – host Leahy welcomed all-star panelist and senior editor-at-large at The Epoch Times, Roger Simon, in-studio to reflect on his visit to Cuba in 1959 and experiencing Communism.

Leahy: In studio with us, all-star panelist, Roger Simon. Roger, when we left our audience, you were in an airplane. It was 1979. You were trying to land in Havana, Cuba.

You were with a bunch of lefties. And you were the only one who spoke Spanish, which is what the air traffic controller spoke. Tell us about how you talked the pilot down.

Simon: I’m not a great linguist, but I made it. Anyway, we got on the ground. (Leahy laughs) And here’s what I discovered about Cuba right away.

And I think a lot of people know this. First of all, it is a gorgeous island. It’s one of the most beautiful places on God’s green Earth.

And all those beautiful DeSotos driving around the first five minutes, you say, oh, look at all those great old American cars. And then you realize what the people are living like.

And they’d be saying how great everything was. And then they’d whisper in my ear, either in English or Spanish, depending, on how do I get out of here? Help me.

Leahy: How often did that happen?

Leahy: Did you start to get a clue?

Simon: It happened in the Soviet Union too.

Leahy: You were lefty at this time.

Simon: Yeah, but I wasn’t – I was always more of a tourist lefty you could call it.

Simon: Or I could say to you, my life as a hypocrite.

Leahy: (Laughs) And by the way, this is what everybody loves about you, Roger. Your use of language is so precise and so cunning. My life is a hypocrite. I like that line.

Simon: Well, thank you. But that’s my job to write things. But that’s why today when we look at these people marching in the streets – who are emaciated if you look at some of them.

Simon: And then you look at our government and how little attention and how embarrassed they are because, after all, AOC and Bernie may not like this.

Leahy: What’s Bernie said about the Cuban protests and the support for freedom?

Simon: Bernie is concerned for their health care. (Leahy chuckles)

Simon: These are people who have a secret policeman on every block. We’re getting there ourselves. That’s where we’re headed.

Leahy: I think we are headed in that direction.

Simon: It goes back also to the Iranian Revolution of 2008 when they were trying to free themselves. And the people in the streets of Havana were shouting, Obama, Obama, are you with us? Or are you with them? Meaning the ayatollah. And Obama said nada.

Leahy: So nada is what basically the current secretary of state, the former partner at Winken, Blinken, and Nod -Antony Blinken -that guy, the ultimate beta male.

Leahy: They’re not helping out there for the people in Cuba.

Simon: I think they find it an embarrassment to them, and they don’t want to hear about it because what it shows is the decline of our country and the sadness.

Beth Harwell and you were talking about this at the end of your last hour. It used to be that America was the bastion of freedom and that we would be there for these Cuban people, but we’re not. And it’s only 90 miles off Key West.

Leahy: Do you think if Donald Trump was still president, what would he be doing right now?

Simon: I don’t know exactly but he’d be certainly making a lot of noise.

Simon: I was listening to one of the other programs on his network yesterday with Clay and Buck and they were debating the issue of whether we should intervene. Clay was more of an intervener.

Leahy: Clay was more of an intervener?

Leahy: That’s interesting because Buck’s a former CIA guy. Maybe memories of the Bay of Pigs were in Buck’s mind.

Simon: The CIA is often guilty of bad planning, among other things. But there are things that could be done, but our current administration couldn’t do anything.

Leahy: They’d do nothing.

Simon: They’re more interested in those evil people who were at the capitol on January 6, not the starving people of Cuba.

Leahy: Tell us more about your 1979 visit there.

Simon: One of the interesting things about Cuba, and this relates to that visit, is the romanticism of Fidel that we all had in those days. When I was a 15-year-old kid in New York, I wanted to hear Fidel in Central Park.

Leahy: This was before he took over?

Simon: I couldn’t hear the speech because Central Park was so filled with people because mostly it was Dominicans there who, by the way, were all begging for Fidel to liberate the Dominican Republic.

Leahy: Did he deliver the speech in English or Spanish?

Simon: Actually, Fidel didn’t speak much English, so he wouldn’t have bothered. At that time in New York City, there were so many Spanish people.

Leahy: This is sort of a throwaway line, but I personally blame the former major league team, the Washington Senators, for the Cuban Revolution. Do you want to know why? Because he was a pitcher in Cuba.

Leahy: And supposedly the Washington Senators considered making him an offer, and they didn’t. (Simon chuckles)

Simon: I sure wish they had. (Laughter) He was bad enough. But Che Guevara was worse. Everyone idolized Che without knowing that what she did do was – former buddies who disagreed with him about the party line in a marginal way –

Simon: They did it faster than Stalin did it to Trotsky.

Leahy: It took him many years to do it to Trotsky.

Leahy: So when you left Cuba after – how long were you there?

The plane wasn’t allowed to land to pick us up. And we were terrified. Speaking of my life as a hypocrite, we were desperate to get off.

And one thing about being in Communist countries, which I’ve been to a few times, is they are giant jails. And you are very aware of the fact that you’re in jail, even though the jail may be gigantic. So you’re starting to sweat like crazy.

Leahy: Because you want off.

Simon: We got off after sitting in the airport for a full day.

Simon: And we finally got off because someone appealed to Raúl Castro.

Leahy: Who appealed to Raúl?

Leahy: So somebody called them in the United States or somebody from your group?

Simon: Someone internally in Cuba.

Leahy: Somebody in Cuba asked them.

Simon: Yeah. I don’t know who.

Leahy: What would have happened if the plane didn’t land? Where would you be today? (Laughter) You wouldn’t be on this show.

Simon: I would be a high party official bossing people around. (Laughter) It was the beginning of my education about communism because communism is not communistic. Communism is a form of fascism where the top people get really rich.

Castro died a billionaire. Most people don’t realize it. Although he had several homes and yachts and all that stuff and all these other people you can see on television or watching there are not too rich.