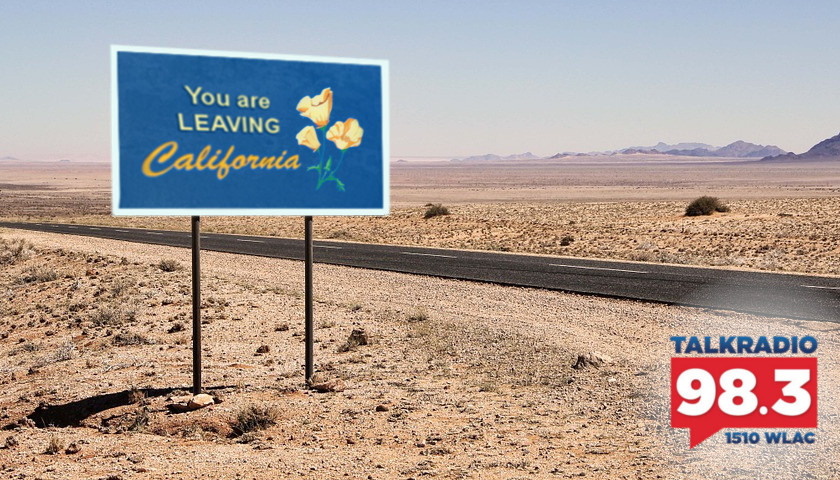 Live from Music Row Tuesday morning on The Tennessee Star Report with Michael Patrick Leahy – broadcast on Nashville’s Talk Radio 98.3 and 1510 WLAC weekdays from 5:00 a.m. to 8:00 a.m. –  host Leahy welcomed the creator of the Huey Report and direct mail expert, Craig Huey, in-studio to discuss what he saw in California on a recent trip citing limited amounts of liberty and freedom and an environment of fear.

Leahy: We welcome to our studios our good friend, a California refugee, a smart man who’s come to Nashville, Tennessee. Has a business in Nashville and lives in Williamson County now, Craig Huey. Good morning, Craig.

Huey: Michael, it’s great to be with you.

Leahy: Did we send you off on a reconnaissance mission back to your home state of California recently?

Huey: Yeah. I snuck back into California, and I got to tell you, it is pretty oppressive.

Leahy: It’s gotten worse in the years since you left.

Huey: Oh, my gosh. Over 12 months, I officially left in June. I bought a place out here back in March of last year. And so I’ve been back and forth. And the devastation is unbelievable. So back in California, I was there just when they started opening up the restaurants after 12 months.

Leahy: You went back to Los Angeles or Orange County.

Leahy: Did they require that you show an ID before you got on the plane?

Huey: They did require it. How about that?

Leahy: Was it Delta or some other airline?

Huey: This one was Delta.

Leahy: So let me just be clear.

Leahy: Delta Airlines, which is a virtue-signaling opposition to the Georgia law election law that requires an ID to get an absentee ballot.

Leahy: To 10 percent Black Denver, where they have the same election laws.

Leahy: This company, Delta Airlines, would not allow you to get on the plane unless you show them your ID.

Leahy: So let’s track your journey. So you show your ID.

Leahy: You get on Delta Airlines. They don’t allow you to get on unless you show that ID.

Leahy: You wear your mask the whole time.

Leahy: Got to wear the mask. You land in California, at LAX, probably.

Leahy: Los Angeles International Airport. You get out. Describe what you see after you land.

Huey: I get out. And as soon as I walk through the airport, it’s so much different than the Nashville airport. You feel a feeling of fear and oppression just on the people themselves. In Nashville, I can kind of have the mask down and not have it fully on. In LA people will turn you in.

Leahy: They’ll turn you in? Where’s that? Were there people out there looking for Craig Huey to see if he wasn’t wearing that mask ready to turn you in?

Huey: There were people looking to see and make sure they had it over their noses. And so I get into the car and the car is taking me to my place there.

Leahy: Okay. You’ve got a driver.

Huey: I have a driver. Super nice guy. And let me tell you what this driver goes. I say, in Tennessee, I go to the market and we go to a store and people aren’t really wearing masks. People are at concerts. People are doing different things. But out here, they’re not. And he goes, I can’t believe that. He had no clue that people weren’t living in fear and in a lockdown-type society.

He had not been to a restaurant in 12 months. He doesn’t go outside his home without a mask. And even if he’s walking the street alone, even if he’s in the car alone, he’s got the mask on in fear. Because, first of all, Dr. Fauci told him and President Biden told him to do so. And second, he doesn’t want to have the neighbors turn him in.

Leahy: He doesn’t want to have the neighbors turn him in.

Leahy: Another good reason to leave California. Your neighbors are crazy.

Huey: That’s where I grew up. In that area. I was surfing in that ocean throughout junior high.

Leahy: And by the way, just for our listeners, Craig Huey is the ultimate California kid. Craig Huey was a surfer boy.

Leahy: When the Beach Boys got started, you were part of that crowd.

Huey: I was part of that crowd. That was my music. So I go down to Manhattan Beach and I’m not wearing a mask. And somebody on what’s called the Strand which is a walkway along the beach comes up to me, says, you can’t do this. You don’t have a mask on. I said, what are you talking about? They’re going to give you a ticket.

They’re giving thousands of tickets to people who don’t have the mask on or properly. $500 tickets. They have an army of people out there making sure everybody’s regulated when they’re out in the fresh air when they’re maybe by themselves, and they may have nobody around them, they have to be obedient.

Leahy: And there’s no science that backs up any of that stuff. And by the way, so I looked at the latest COVID stats from free states like Texas. No masks. And Florida, no masks. You’re free to roam about the state. They have lower cases of COVID.

Leahy: In those free states. Unlike California, New York, Michigan, all of the blue authoritarian control you’ve got to wear a mass state.

Huey: Yes. It’s the principle of freedom and personal responsibility versus collectivism statism where the government’s telling you what to do. And there’s not individual freedom being respected in a state like California or New York or Connecticut. But in Florida, in Texas, and here in Tennessee, we have liberty. We have choices to make. And our choices are something where you see it in unemployment. In Florida, the unemployment rate is around three percent. In California, it’s close to 10 percent.

In California, half the restaurants are closed forever. In Florida, I was down there with my wife in Florida at a conference, a full-on conference mind you, with people there in the conference. I was down there in Florida about a week ago, and the restaurants are expanding. They’re booming. They’re full. People are back. And that’s freedom and in action. That’s freedom working. And in California, it’s like, I don’t know if I can go to a restaurant. I’m afraid.

Leahy: It’s kind of crazy. By the way, this is new information for you, but it fits our theme here. So I was down in Tallahassee and about a week and a half ago and cooking up a little expansion of the Star News Network. As you know, I’m the majority owner of Star News Digital Media. We operate the Star News Network. We currently have six conservative, state-based news sites. The Tennessee Star, The Georgia Star News, The Virginia Star, The Ohio Star, The Michigan Star, and The Minnesota Sun. And on April 21 we are opening The Florida Capital Star. How about that?

Leahy: Then then wait for it. Wait for it. In May, we’re gonna open up The Texas Lone Star. Do you like that?

Leahy: And what is our theme here? Our theme is liberty. Yes, we are featuring state, state-based pushback to federal usurpations. Right now ironically, Craig, if you look at our new sites, we get a lot of traffic from California.

Huey: I’m not surprised. Let me tell you, the exodus out of California is huge. Where I live, in my community, out in Williamson County I would say the neighbors are from California. I was at church. A car pulls up next to me and a family gets out. I look at the license plate. It’s like mine. (Leahy chuckles) It’s from California. They had just moved out just a couple of weeks ago. And we’re seeing Californians making a decision to leave family, friends, work, and places they were born to venture out in freedom and get away from the oppression of California.

Leahy: Famously, in 1876, a newspaper publisher and presidential candidate who did not succeed, Horus Greely famously said, Go West Young Man. I think now, go away from the West of California is the theme.