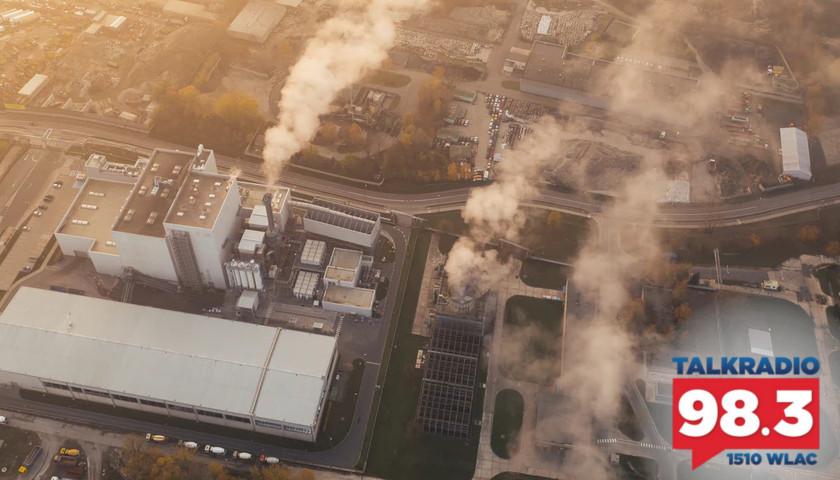 Live from Music Row Tuesday morning on The Tennessee Star Report with Michael Patrick Leahy – broadcast on Nashville’s Talk Radio 98.3 and 1510 WLAC weekdays from 5:00 a.m. to 8:00 a.m. –  host Leahy welcomed 2nd Vote Advisors Dan Grant in studio to explain how banks, Congress, and Democrats are colluding to create a barrier for new competition through legal legislation.

Leahy: We are joined in studio by our good friend Andy Ogles, mayor of Maury County, and also Dan Grant, head of 2nd vote Advisors. Andy, I just want to bring you in here for a second. What do you think of all this stuff he’s talking about here?

Ogles: Well, it’s amazing because I think people do want options. They want choices because so many of these corporations are going woke and you’ve got your banks now that are leveraging their resources to work against We the People.

Leahy: It’s crazy. They’re trying to crush small businesses by putting all these regulations, all these ESG regulations that cost money. And it’s a barrier to entry to new competition. And it’s anti-American. And that’s what Larry Fink and BlackRock and all these Democrats running in Congress and the regulators are trying to do Dan.

Grant: And that’s the goal. So let me tell you a little bit about how they’re trying to do it. So the banks are all announcing that they’re joining the Partnership for Carbon Financial Accounting right now.

Leahy: I got a headache already. Carbon accounting? Is that a new kind of accounting?

Grant: Is that going to impact Tennesseeans? And I’m here to tell you that it is absolutely going to do it. And this is how they’re doing it. So 110 of the largest banks in the world have joined this.

The third had their press release a couple of months ago. And basically what they’re doing is they are reporting the carbon footprint of their customers, of their loan portfolios.

Leahy: Of their customers.

Grant: Of their customers.

Leahy: It’s none their business.

Grant: So what they’re doing as an industry group is they’re saying, okay, this customers carbon footprint we do not like. They are going to raise the pricing of those loans. And ultimately what they’re going to do is…

Leahy: Is that legal?

Grant: It’s legal. And they’re doing it. And ultimately, what they’re going to do is they are going to throw these companies out of the bank. Well, you can sit there and hear that and say there are 4,500 banks in this country, big deal.

They’re going to go to a smaller, medium-sized bank. And I would say, au contraire mon frere. That is not going to happen. Because what they’re doing is these ESG regulations.

Grant: Right. So the Partnership for Carbon Financial Accounting, this industry group is voluntary for these large banks.

Grant: So what they’re doing is they are doing the societal good. They’re raising loan pricing on bad companies with high carbon footprints and throwing them out of the bank.

Leahy: This is anti-free market! Didn’t Adam Smith talked about the invisible hand of the market and it’s that invisible hand that ends up in the best good for all the economy. Andy, I see you wanted to jump in here on this. You’re a free-market guy, right?

These customers we’ve thrown out of the bank are going to small and mid-sized banks now. Those money-grubbing midsized companies are not looking out for the greater good of society.

They need to be regulated. So what is voluntary at the large corporate level is regulatory at the small and mid-size companies.

Leahy: Are those regulations in effect now?

Leahy: Okay, let me just say whenever the Democrats pass a law that says X, you can be sure that it’s actually going to accomplish not X. That’s an example.

Grant: No, no, no. Maxine Waters was out there last week disagreeing with you, Michael. And she said, “It is surprising that to this day, there are no explicit ESG requirements and our investors are left to piece together the story of a company’s material risk with insufficient information.”

And I will tell you, if there is a material risk to any publicly traded company, it must be disclosed. I’ve been doing nothing but working with the SEC and attorneys for years on these ETS’s.

And if there’s a material risk, it needs to be in writing. But Maxine Waters, she’s here to help. She’s from the government. And she’s going to tell you that there is a whole new risk cloud out there that you need to be aware of.

Leahy: And the government needs to regulate it.

Leahy: And in other words, crush small businesses, small banks. That’s the plan. This is scary. Now for those listeners who want to do something about it, one of the things they can do is they can buy your ETFs.

Leahy: Exchange-traded funds. Now walk me through it. We talked about one, which is like the Second Amendment. Let’s talk about the pro-Second Amendment fund. Describe what that fund invests in.

Grant: There’s a corporate scale of one to 5, 1 and two Liberal, 3 neutral, four or 5 conservatives. And what we’ve done, we’ve rated all publicly traded companies, and we stick to mid and large-caps. So larger U.S. companies, nothing small-cap for now.

Leahy: When you say a mid-cap company, that would be a company with maybe half a billion in sales?

Grant: So it would probably be 2 billion and up.

Leahy: In value. That’s a mid-cap. So anything 2 billion and up is something that we would consider.

Leahy: So my company Star News Digital Media would not be a mid-cap company.

Grant: You’d probably be a large-cap. (Laughter) A 100 billion and up.

Leahy: We will be a mid-cap company someday. (Laughs)

Grant: It’s mostly intangible unfortunately for you but highly valued nonetheless. We’ve rated these companies on a scale of one to five. And we’ve done that on issues that conservatives care about.

Leahy: The rating would be either three neutral?

Grant: Three or four or five are going to be eligible.

Leahy: Now, there are 1500 companies that you look at?

Leahy: Of those 900 how many are three, four, or five on the ratings?

Leahy: That many? I’m surprised.

Grant: 90 percent of those are neutral.

Grant: So there are very few companies that would rate a four or five to give you a sense.

Leahy: Do you invest in three, four, and fives?

Grant: We invest in three, four, and five.

Grant: Let’s say you have an E-Trade account or a Robin Hood Account You put in the ticker symbol EGIS.

Leahy: I want to buy it because I like what you’re doing. How much does it cost?

Grant: And if you didn’t like it the next day, you could sell it. It is a very liquid stock. You’re not buying it and you’re stuck with it.

Leahy: So I could buy today.

Grant: You can buy it today.

Leahy: One share for 30 bucks or more. And it’s liquid.

Leahy: But it’s liquid. It’s improved, hasn’t it? If I would have bought this when you started this, where was it?

Grant: So we launched the two funds publicly on November 18. By the end of the first quarter, Egis was up 20.8 percent compared to the S&P 500 at 10.7. And the other fund, LYFE which is a fund that supports life, obviously pro-life. The ticker LYFE, it was up the point versus the S&P 500 at 10.7 points, I think.

Leahy: And you got more of these coming, right?

Grant: That would be great.

Leahy: That’s what I think I’m going to do. And we’ll track it. I think it’s going to do well personally.

Grant: We don’t have to be the size of Larry Fink to be effective. A guy like me can call a lot of these companies and say, hey, we are an owner.

Leahy: You know, one thing that I don’t like that’s going on in Congress right now is the efforts that a lot of these companies that are influenced by Larry Fink’s ESG left-wing junk are then sending letters to Congress.

Andy, we saw this story at The Tennessee Star today. Over 70 companies signed a progressive groups letter supporting the ‘For the People Act.’ Tell us why that struck a nerve with you.

Ogles: This For the People Act has to do with voting.

Leahy: By the way, let me just say they name it the For the People Act. But the real name is the Political Corruption Act.

Ogles: That’s right. They stole an election, and now we have all these audits going on. And so what’s plan B what’s plan C? How else can we try to influence elections? And so what these 70 companies are trying to remove, you have to be able to prove who you are to vote.

And it names race as an issue. But it says, working-class people. They say this in their press release are barriers to voting. Now, wait a second. If you’re working class, I’m assuming that you have a job. In order to get open a bank account, you need identification.

To have utilities, you need identification. All the basic things that we have to do day in and day out require a Photo ID. So why wouldn’t when you go vote, you’d be required to have a photo ID. Because you know what?

I want to make sure that my vote as Andy is cast by me. And so if someone just shows up at the ballot box and says, well, I’m Andy, and I want to vote, I want to be able to them to turn them away.

And so this idea that this is a barrier to voting is nothing more than more this virtue signaling and PC have gone awry.

Leahy: See this is the guy that’s been doing this for a while. I stumbled through exchange-traded funds. Okay, so that’s one thing you do.