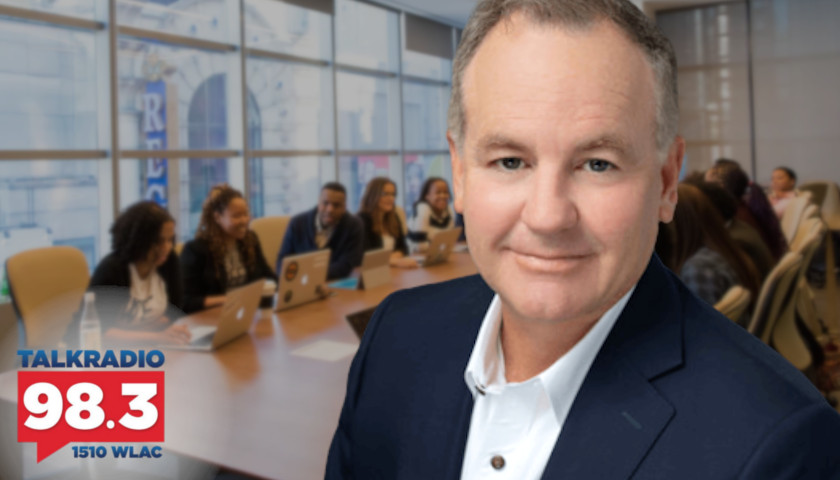 Live from Music Row Tuesday morning on The Tennessee Star Report with Michael Patrick Leahy – broadcast on Nashville’s Talk Radio 98.3 and 1510 WLAC weekdays from 5:00 a.m. to 8:00 a.m. –  host Leahy welcomed Co-Founder and CEO Daniel Grant of 2nd Vote Advisers to the studio to discuss his background, their mission and the threats of stakeholder capitalism and environmental social governance.

Leahy: Batten down the hatches because we’re about to light it up in studio. With us, Dan Grant with the 2nd Vote Advisers and we’re going to learn all about them. I am very excited about this.

If you are frustrated and you want to do something to stop the wokeness in Fortune 500 companies, you got to talk to Dan Grant. Dan Grant has an option for you. In-studio with us also, our good friend from that bastion of freedom in Maury County, Mayor Andy Ogles. Good morning, Andy.

Ogles: Good morning. Yeah, I’m intrigued as well. When you have Coke, Coca-Cola getting woke and you have all these companies. Look, if you make 10 issues…

Leahy: Don’t lecture to me about how bad America is because it’s not bad it is great. Dan Grant, where have you been? Why has it taken so long to get 2nd Vote Advisers up and running?

And Let’s get you going. Tell us about 2nd Advisers on the web at 2ndvoteadvisers.com. What’s the idea, who is behind it, and what are you doing?

Grant: Sure. Great to be here. Thanks for having me, Michael. The research part of the company started in 2012. My partners in the business, Dave and Diane Black. Diane was in Congress for many years.

Grant: Ran for governor, ran the budget committee. Dave, her husband then started a very successful drug testing company. I met Dave over 10 years ago when I was a banker at JP Morgan. We got to know each other fairly well.

And Dave being a prominent conservative, one day he was checking out at the grocery store and the clerk asked him, do you want to donate to a charity? Which he did. And they walked out and Diane looked at him and said, why did you do that?

That charity you just donates a lot of money to Plan Parenthood. And they’re very strong pro-life supporters. And Dave said, I had no idea. And that got him thinking, what else don’t I know?

And this was back in 2012 before a lot of this corporate activism really came to the public forefront. So he started a research company called 2nd Vote. And they score companies and they’ve been doing it now for nine years. And the scale is one through five.

So one means you’re liberal, two is leaning liberal, three is neutral for conservative, and five conservative. They’ve scored the S&P 1500. And you look at it today, and we now realize he’s really scoring companies on this stakeholder capitalism, Michael, is what they’re doing.

Leahy: It used to be in the olden days when people really understood capitalism, it was all about maximizing shareholder value.

Leahy: Now, you got to be politically correct, because if you’re not some left wing Liberal who’s running a big investment bank or a hedge fund like BlackRock, they’ve sent you a note and said, you got to bow the knee to critical race theory and global warming. You got to do all this stuff that’s stupid or else we’re gonna kick out.

Grant: Well, it’s unfortunate, right? I think this country, the economy that’s driven or wealth and success under attack and it’s under attack by what is called stakeholder capitalism.

So you ask, where have we been? I’ve been in the financial services industry my entire career. I have been around, but it really does take a small startup company like ours to do what we’re doing because the big banks I worked for, Wells Fargo, JP Morgan.

Grant: Well, they’re all fully vested in this theme.

And they were talking about the concept of corporate governance and stakeholder capitalism there. But it was just their sort of advisory. Now you’ve got these guys at BlackRock sending out these missives on. They call it ESG. Environmental social governance.

Grant: Which is the largest investment theme in the world. There are trillions of dollars behind it. So your listeners know there’s shareholder capitalism, which is a corporation that should be run for the benefit of shareholders.

Grant: Right. The owners, which I would agree with. But we are not sticks in the mud. If you’re a shareholder capitalist, corporations for many, many years have supported traditional charity. Helping the needy, the sick, and the poor. That is something that corporations have done for a long, long time. But now you have the World Economic Forum, Claus Schwab the stakeholder capitalists.

Grant: The Davos. And guess what? Their definition of good, they’re saying corporations should no longer be run solely for the benefit of shareholders, but for the good of all stakeholders.

Leahy: And the good is defined by these elitist leftists who are running these big hedge funds. And they don’t think the same way you and I do.

Leahy: It’s somebody that exists. That’s it.