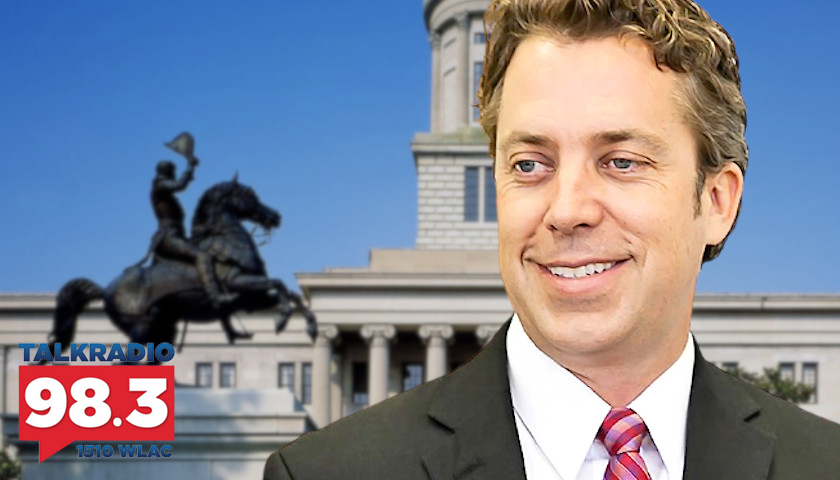 Live from Music Row Tuesday morning on The Tennessee Star Report with Michael Patrick Leahy – broadcast on Nashville’s Talk Radio 98.3 and 1510 WLAC weekdays from 5:00 a.m. to 8:00 a.m. –  host Leahy welcomed Maury County Mayor Andy Ogles in the studio to discuss the potential for the 2020 election results to be decertified and the consequences of unelected bureaucrats.

Leahy: I’m always glad to have that great, steady, calming influence of that find Southern gentleman Andy Ogles, the Mayor of Maury County.

Ogles: Good morning. Because, you know, it’s good to have that calm, thoughtful, responsiveness to the hot energy I bring when we’re looking at these election issues. I would love to get your reaction to this.

And we have a story at The Tennessee Star. I’ll read the headline and the first two paragraphs and then get your reaction. This is a national story, but it does have state impact because we’ve got the problem here of illegal aliens coming into Tennessee. And it’s causing difficulties and expenses from the state.

We’ll get to that in a bit. Let me look at this story. I want to get your reaction. Headline. Former Trump Campaign Advisor Boris Epshteyn Predicts States Will Decertify 2020 Election Results.

Boris Epshteyn, attorney and former strategic advisor to the 2020 Trump campaign predicted many states will decertify their election results for the November 2020 election. In an interview with Gina Loudon, our friend, Epshteyn said the series of audits that may occur could lead to the reversal.

Additionally, this is what he says. There is no language in the Constitution that prevents such a move. “The further we go on this freight train of audits from Arizona to Georgia to Pennsylvania, and the more deeply horrifying information is uncovered. Ballots missing. Databases missing in Arizona. Fulton County, chain of custody documents missing in Georgia and Atlanta. Pennsylvania, a total cesspool of disaster. The more that information comes out, the more Americans believe this was a fraudulent election,” Epshteyn said.

What do you make of this claim that states will decertify their election results?

Ogles: I think that the last statement is key. We’re in unprecedented waters here constitutionally. The question is, there is no mechanism. So what happens next? And so ultimately, you think, well, it’s going to get kicked to the Supreme Court.

Leahy: Neither of us are attorneys. But I think you’ve asked a critical question. I do think that it’s entirely possible that Georgia and Arizona, and in particular, Arizona because the state Senate is Republican.

The state House is Republican, same as in Georgia, although they’ve been a little weak in Georgia, they’re controlled by Republicans. I think it is possible that a special session could be held or even a regular session in January.

And reviewing all this evidence, I think they could say we vote to decertify the election. Okay. What’s the impact of that? And the answer is in terms of legal mechanism, nothing. Now in terms of public opinion, however, and I think this is the angle they’re going at.

I think a growing belief that this was an unlawful election and in many cases, and we’re looking in Georgia more and more that they can’t produce chain of custody documents as we speak today, seven and a half months after the election, there are no chain of custody documents for more than 300,000 absentee ballots cast in that election where the margin of victory was less than 12,000.

Ogles: Wow. At what point does this one become criminal? But, you know, I’ve had the opportunity kind of here as COVID’s been waning to speak, quite frequently across the state. And I can tell you, overwhelmingly, as I go around and I’m talking to these various groups from Jackson to Knoxville and everywhere in between that people think this election was stolen.

And I think more and more of these audits are showing that there’s a whole lot of monkey business or incompetence that took place. But at the end of the day, we were defrauded out of a true and honest election.

Leahy: Well, that’s the mantra now from the Secretary of State in Georgia. Sloppy but not fraudulent.

Leahy: Sloppy, but not fraudulent. And it’s not just The Georgia Star News our site in Georgia. Just the News. Did you see what they got? John Solomon’s group. They got a 29 page memo from this guy by name of Carter Jones, who observed what happened in Fulton County from November second to November seventh.

And it is just a litany of a massive chain of custody problems. We’ve only reported on the movement of absentee ballots, which, by the way, they still haven’t produced the 385 missing transfer forms for 18,000 ballots to us at The Georgia Star News.

Fulton County claims to provided or Georgia Public Broadcasting complains that they provided all the missing documentation to them on Wednesday in 48 hours of receiving a request from them.

Six and seven months after we’ve requested it. We don’t have any of that data yet. They still haven’t provided it to us.  And by the way of the ones we looked at, five percent of those absentee ballots were delivered to the registrar before they were collected at the dropbox. (Ogles chuckles) Time travel. If you believe in time travel, you believe in the certification of that election.

Ogles: But, you know, Laura Baigert who was on this story for The Georgia Star News, she got a shout out from our former President Trump. That has to be an amazing accomplishment from a journalist’s perspective.

I mean, Trump is Trump. Whether you like, like Trump or dislike Trump, he’s in his own kind of stratosphere. And to be given a shout-out by the former President is pretty amazing.

Leahy: Well, he’s tracking this, and it’s important stuff. And what’s interesting is you get in the weeds on this stuff. But in an election where you have absentee ballots placed in drop boxes, what a formula for fraud that is.

By the way, the Georgia state legislature did not authorize the use of drop boxes. There were 300 around Georgia. 37 in Fulton County not authorized. It was an emergency election code rule passed by the Georgia State Election Board that put them in place.

They had a rule about how you track them. So it’s very complicated. But the chain of custody was broken on so many levels there. The way they worked it is you would put these ballots in a dropbox.

And then these election workers, some of them who worked for apparently, this attempt service called Happy Faces, who got the contract with Fulton County because they were represented by wait for it…Stacey Abrams. (Ogles chuckles)

Gee, what could go wrong there? But what we can trace is they took these ballots, apparently, to a warehouse. And they held them there until they were going to count them in the election.  Supposedly they tracked the movement of absentee ballots from 37 drop boxes to the warehouses.

They’re also supposed to, although it’s not an election code rule, apparently, there were some instructions that there’s a mechanism for tracking the movement of absentee ballots from the warehouse a couple of days before the election to four miles away to the counting center at the State Farm Arena, and then back.

You’re supposed to put them in a box. Number the boxes and track all that. They haven’t done that at all.

Ogles: So you’re saying an unelected bureaucrat change election law under the nose of the legislature, kind of like CRT in Tennessee.

Leahy: Exactly like it. This is why this is kind of circling back to what is making people so angry.

Ogles: That’s right. Because our bureaucrats are doing things that they’re not authorized to do by law, and we’re being forced to live with it. And not just on the consequences of this election, but in everyday life and in everyday life here in Tennessee.