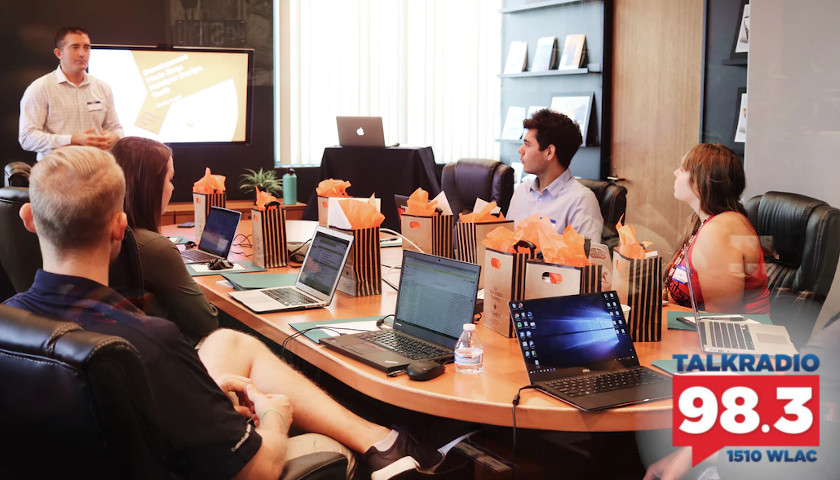 Live from Music Row Tuesday morning on The Tennessee Star Report with Michael Patrick Leahy – broadcast on Nashville’s Talk Radio 98.3 and 1510 WLAC weekdays from 5:00 a.m. to 8:00 a.m. –  host Leahy welcomed Co-Founder and CEO Daniel Grant of 2nd Vote Advisers to the studio to discuss their alternative for Fortune 500 corporations who want stay out of the politically correct ideology promoted by left-wing asset management firms.

Leahy: I’m just so excited about our guest today because you’re going to learn something about how to fix America right now. And one of the problems with America is embodied by a guy you’ve never heard of folks.

Listen to this guy’s name. He’s aptly named. His name is Larry Fink. F-I-N-K. And he’s very aptly named. He’s a very powerful guy, really powerful guy. He’s ahead of a group, the biggest money manager in the country, BlackRock. They manage, what, $9 trillion?

Leahy: $9 trillion. And he’s pushing all this leftist claptrap. There’s a claptrap that he’s pushing. And he wants in his mind, there are good sources of virtuous energy. And then there’s evil. And so in his mind, natural gas, oil, coal, that’s evil.

But solar wind, that’s virtuous. And he’s created all sorts of incentives for CEOs who just want to keep their jobs and get paid $10 million, $20 million a year to kind of be figureheads, moving along with the left.

There are all sorts of pressures with his regular messages to them about what he wants to see. This guy is running the policy of many Fortune 500 companies today, and it is, in my view, Dan Grant, a disgrace. What do you think?

Grant: I think, Larry, he’s a representative of the asset management industry as a whole. BlackRock is the largest. But if you look at all of the leading banks, all of the leading asset managers, investment managers, they’re following this philosophy. And if you went to the BlackRock website, you would find what they call their stewardship team. And that sounds great.

Grant: Sure. They adopted the term. And what they will brag about on the website is last quarter, the stewardship team from BlackRock visited 482 companies and their boards, their management teams, and said, hey, listen, guys, we’re owners were big owners of your company. And if you don’t start making acceptable progress towards hitting these ESG metrics that we have laid out,

Leahy: ESG. Environmental social governance. And some of these metrics are ridiculous, right? They basically, take bad leftist policies, they are the metrics.

Grant: So they’re the largest asset manager in the world. They go to these management teams and say, you need to start doing more to implement our definition of good. You need to start forcing that definition on your suppliers, your vendors, and ultimately, your customers. And if you don’t, we will start voting you out. And they are doing it.

Leahy: They’re voting them out. And basically, you got to accept their version of diversity, equity, and inclusion. You got to embrace Critical Race Theory in the workplace which is perhaps one of the most divisive things that are out there.

Now, people listening to us, you work for a large company, they’ve got diversity, equity, and inclusion. And if you go in, you’re forced to sit through the training. They’re telling you stuff that you know is wrong.

Grant: My company from a practical perspective, 2nd Vote Advisers, we’re looking at what they’re doing and we’re saying, what is the cost to these companies at the end of the day?

Leahy: (i.e. dividing people). That’s what those programs do.

Grant: You read the press release and you look at it and it’s like, okay, their funding, additional mortgages, small business loans, and that all sounds great. And the top 10 banks all have very similar programs, multi-billion dollar programs.

But nowhere in that press release is the actual cost. They’re not talking about the underwriting criteria for these types of loans and for these types of mortgages? A friend of mine was seriously being considered to be the CEO of Fannie Mae back in the Great Recession.

Leahy: Tell people what Fannie Mae is and why it matters.

Grant: It’s one of the government-sponsored entities that will essentially buy up mortgages.

Leahy: Why did they allocate those 10 percent of subprime loans?

Grant: Because they wanted to do something for the social good.

Leahy: Because it would be good.

Grant: It would be good.

Grant: So to bring it back to JP Morgan and this 30 billion and the top 10 banks, what they’re doing, what is the actual cost? Nobody knows. Third Bank just announced a $2.8 billion program, and they’re investing in a bank in Detroit, which doesn’t have the best background.

Leahy: I guess we’ll find out.

Leahy: But let me come back and say, okay, so these big money managers like Larry Fink. F-I-N-K. Big Larry Fink, that guy. They’re forcing companies to do all this politically correct stuff that’s costing a lot of money.

Let’s say you have some assets that are currently under management. What can 2nd Vote Advisers do to help out?

Grant: The first thing I would tell you is we are not going to do what BlackRock is doing. We are not going to be visiting companies and their boards and saying, hey, guys, we want you to implement our definition of good.

Grant: That’s right. So what we’re doing is we are actually voting our shares with our beliefs. Companies should not be into social justice engineering. So we are telling CEOs to do that.

And I feel like we’re actually giving CEOs a reason to say no to Larry. Larry, right now, and all the big banks, all the asset managers, as I mentioned, are behind it.

Leahy: He’s kind of a tyrant when it comes to dealing with CEOs who are just quivering when his stewardship team walks in, they start to wonder, what can we do? What can we do? How can we not make them upset? How can I keep my job?

Grant: So what I hope to do is give these CEOs a reason to say no to Larry. I want them to say, Larry, listen, I hear what you want, but I got Dan Grant from 2nd Vote Advisers, and he wants us to do something completely different.

We’ve gone to our board, and we’ve decided to just stay out of the whole thing altogether and focus on our company and profits and let the individual decide where they want to put their philanthropy and charity.

Leahy: This Larry Fink guy at BlackRock manages 9 trillion dollars of money. Where does that money come from, by the way?

Grant: It comes from you and me.

Grant: Well, we started only a few months ago, and unfortunately, it takes a company like ours, a startup, to do what we’re doing. So I mentioned we started in 2000.

Leahy: You started with zero.

Grant: We started with zero. We now have two publicly traded exchange-traded funds.

Leahy: Tell us what an exchange-traded fund is.

Grant: It’s very much like a mutual fund. So you can go on, you can put the ticker symbol in. And one of our tickers is EGIS and it’s a Second Amendment fund.

Leahy: Which ticker do I go to?

Grant: If you are with a Morgan Stanley or any broker and you want to buy a stock, you put the ticker symbol in and you hit buy. So it is a liquid stock.

Leahy: Can I do it online myself?

Leahy: Where would you go?

Leahy: Put in EGIS I could do it right now if I wanted to buy. And what’s the fund do? Investing in gun companies?