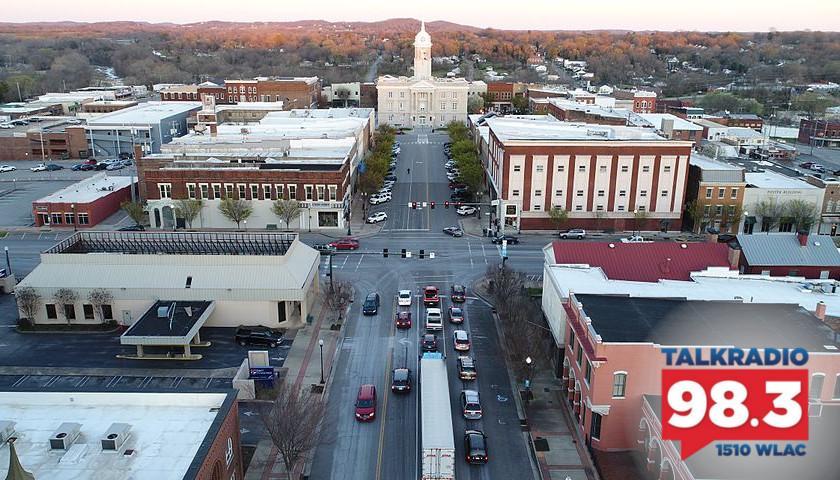 Columbia Mayoral Candidate Debbie Matthews: ‘People in Columbia and Maury County Are Worth Fighting For’

Live from Music Row, Thursday morning on The Tennessee Star Report with Michael Patrick Leahy – broadcast on Nashville’s Talk Radio 98.3 and 1510 WLAC weekdays from 5:00 a.m. to 8:00 a.m. – host Leahy welcomed Columbia, Tennessee conservative mayoral candidate Debbie Matthews in-studio to describe the process of door-knocking in her campaign and how the people in her city and county are worth fighting for.

Leahy: It is always a delight to have the high-energy of Debbie Matthews in-studio with us here.

Matthews: I can’t even sleep when I have to come in.

Leahy: Yeah, it is. I’m a little biased, but I agree. You’re running for mayor of the city of Columbia, in Maury County, which has a population of 40,000. What do you do to run for mayor of Columbia?

Matthews: First of all, you throw your hat in, and then you talk to absolutely everybody. To me, there’s no other way to campaign other than going door to door.

Leahy: When you say that, do you go knock on doors yourself?

Matthews: Me and a team of people. So yesterday there were six of us, and we hit neighborhoods and we go door to door.

Leahy: So how many voters will have had a knock on the door from you or your team by election day?

Matthews: We hit about 200 houses a day.

Leahy: What time do you start?

Leahy: On a weekday or a weekend?

Matthews: Every day except Sundays.

Leahy: Let’s describe this. When you go in, how do you do that? Give me an example of perhaps some of your most memorable doorknocks. (Laughs)

Matthews: Yesterday we knocked on a door, and the man came. I don’t think he had a shirt on, and he looked like he was going to kill us.

Leahy: He was happy to see you.

Leahy: Did you take your leave from that?

Matthews: No, Sandy Henson was at the door, and Sandy is the most terrific human being ever. And she said, I’m really sorry to bother you, but it’s important.

We’re out here just asking for votes for the city mayor’s position, and all of a sudden, he just melted into this wonderful, fantastic human being.

Leahy: He was happy to see you. What did he say?

Matthews: He said, I’ve got a conflict. And we said, well, lots of people have conflicts. What’s your conflict? And he said, Chaz Molder is a friend of my wife’s. He said, but you’ve got my vote.

Leahy: Well, there you go.

Leahy: Do you believe, when you go talk to somebody at the doorstep – first, how many people know that there is an election for mayor of Columbia, Tennessee out of the 200 people you knock on their doors a day?

Matthews: I think most people know because we’re visiting doors of registered voters who have voted.

Leahy: So, you’ve got the data and you know they are likely voters.

Matthews: They are likely voters. And, you know, someone told me years ago, don’t go pull everybody on the registry, because those aren’t the people that vote. Pull the people that have actually voted in this race at this time.

Leahy: That makes a lot of sense.

Matthews: And it makes a whole lot of difference. There were 60,000 registered voters in Maury County, and during the August 8th primary, and also which was a general election for the county mayor’s seat and the commission, only 17,000 of the 60,000 voted. So about 20 percent.

So the numbers for conservatives were like 13,900 to 3,600 Democrats. So we know if Republicans show up to vote, we’ll be okay.

Then we look at what Republican voters voted in the city for at this time, and how many Republicans and Democrats do we have? And we focus on getting those Republicans to the polls.

Leahy: When you talk to somebody, have they made up their mind? Are they persuadable or are they unpersuadable?

Leahy: In your door-knocking yesterday, when you ask that question, what’s the number one thing that people have told you?

Matthews: They’re concerned about the growth.

Leahy: Uncontrolled growth. The question you ask is what’s on your mind or what do you say?

Matthews: How are things?

Leahy: You say, how are things?

Matthews: How are things with you in the city?

Leahy: You say, how are things with you in the city? So you make it specific to the city.

Leahy: But they don’t know.

Matthews: I’ve got a big button on. But you have to remember, I served nine years as the city official and city council person.

Leahy: So a lot of people kind of recognize you?

Matthews: They know me. And I have big billboards, especially because I’m a realtor and my family’s been there forever.

Leahy: For a long time.

Matthews: And I’ve been active in everything. People trust me. They always have trusted me. But if I come and say, what’s on your mind? How’s this water issue? Has it been resolved?

Because there’s a big water problem in Sunnyside that people have been calling the mayor about. We need this fixed and nothing has happened.

Leahy: It hasn’t been fixed yet.

Matthews: Has not been fixed.

Leahy: Remember back in the ’50s and ’60s, Richard Daley was the mayor of Chicago. And he was a tough guy. He was sort of a war boss-type guy. But you know, when it snowed, he got the streets plowed.

Leahy: When the trash needed to be picked up, it got picked up. And these are the basic things that the mayor of a city needs to make sure happen.

Matthews: Exactly. And right now, I always say that our current mayor, who I’ve known for a long time, I call him Prince Chaz.

Matthews: He now has just bought a $1.2 million house. That’s public record. He’s moved off to the rich side of town.

And so in his trek into town, he’s on the newly paved streets with the new historic lighting and all of that stuff. And life is picnics and noodle salad for him. But you get a couple of blocks off the square and things haven’t changed.

Leahy: So by the way, Chaz-with-a-Z Molder. You’re welcome to come in-studio and talk with us about the mayoral re-election.

Matthews: He should. He made a comment at the debate. He was like, I just don’t think it’s appropriate for the chair of the Republican Party to be at the state legislature trying to get an impact fee for the constituents. You don’t have constituents.

And I’m like, going, well, I have about 70 percent of the county. That’s the county chair that I represent. So, yes, I have more than you have in the city.

Leahy: Debbie, you know, I’m getting the sense that you’re kind of feisty.

Matthews: I am. People in Columbia and Maury County are worth fighting for.

Leahy: Now, that is a good line. 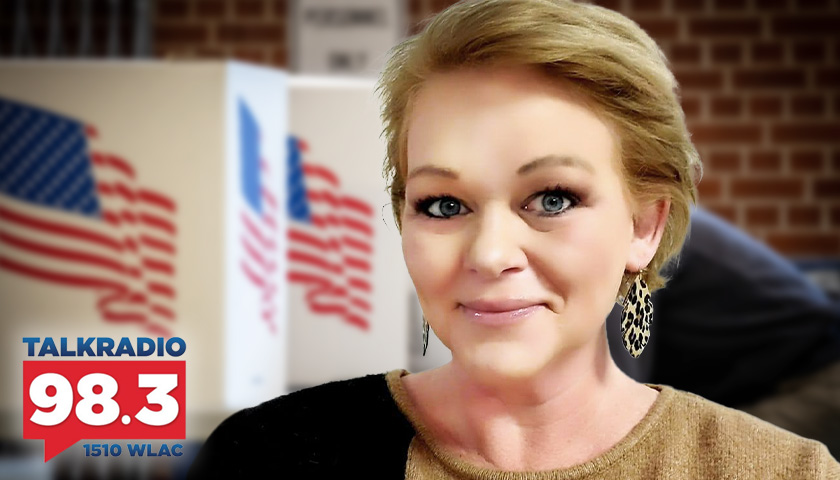 Leahy: Now we are joined in-studio by our good friend Kelli Phillips, who’s a candidate from Metro Nashville Public School Board in the 4th district. Good morning, Kelli.

Phillips: Good morning. How are you?

Leahy: Well, I guess the question is how are you, because we are 24 days away from the election. Twenty-four days. Early voting begins this Friday, and you wanted to share a little bit about early voting. Where can people vote here in Davidson County, starting Friday?

Phillips: So, starting Friday and going through Tuesday, you can vote downtown at the Howard School building. So that’s where early voting is going to be for the first part of it.

Then, starting on the 20th, going through the 30th, you’ll be able to vote at your local early voting area. Mine is going to be the Hermitage library on James K. Lane.

Leahy: And then early voting ends on the 30th.

Leahy: Saturday. Then tick-tock goes, because then we have, the Saturday is the 30th, Sunday is the 31st, Monday is the first and Thursday Election Day …

Leahy: … is the 4th. It seemed to have jumped on us really here quickly. Only 24 days left. Yeah.

Phillips: Time tends to do that the older we get, doesn’t it? It seems like it’s been over a year that I’ve been campaigning, but now that we’re in the last stretch of it, it’s in the blink of an eye.

Phillips: District 4 is the McGavock cluster, and that’s going to be Hermitage, Old Hickory, and Donaldson. And McGavock, that’s a large school cluster.

So as far as what I’ve been doing in the campaign, I have great people that are helping me. I’ve gotten the opportunity to meet so many people knocking doors.

Leahy: So tell me about that. When you say knocking doors, when did you start knocking on doors? And how many doors have you personally knocked on? Let’s get the numbers of that out first.

Phillips: Right, well, in our district, we’ve probably reached, I would say 500, 600 people knocking on doors. And I have people to go out and help me. So I don’t necessarily get the opportunity to knock on every door.

But I will tell you what I do, and anybody who knows me knows that I can have a rally anywhere. I had one last week in the line at Hobby Lobby and met eight people and got six votes while waiting in line at Hobby Lobby to check out. So I take the opportunity to meet people wherever I go.

Leahy: How many votes are you going to need on August 4th to win this election?

Leahy: How many of them do you think you have already?

Phillips: I would like to say 51 percent, just for odd sake. That’s a hard number to guess, but, I mean, based on the people that we’ve talked to, I expect to have a good turnout of the registered Republicans that we’ve spoken to. Some independents and then even some Democrats that are leaning towards voting Republican.

Leahy: You are the Republican, and from what I can tell, there are five district seats up this year and Republicans are competing in two of those five. Is that right?

Leahy: And you’re one?

Phillips: And then Todd Pembroke is in District 2.

Leahy: He’s in District 2, but the other districts are no Republican candidates.

Phillips: There’s no Republican candidates. We do have two independent candidates that are running. Fran Bush is in District 6, so she’s a current school board member.

Leahy: Running as an Independent.

Leahy: When we come back, we’ll talk with Kelli Phillips about the issues and her opponent in the 4th District for Metro Nashville Public School Board.