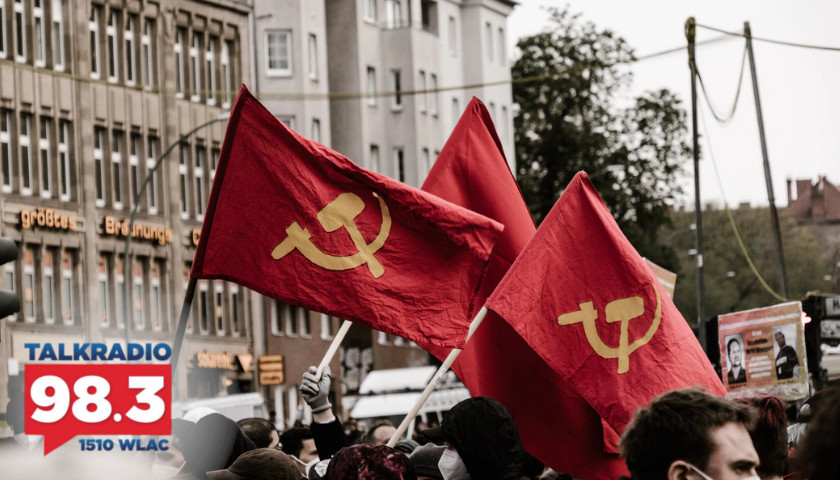 Live from Music Row Thursday morning on The Tennessee Star Report with Michael Patrick Leahy – broadcast on Nashville’s Talk Radio 98.3 and 1510 WLAC weekdays from 5:00 a.m. to 8:00 a.m. – host Leahy welcomed Grassroots Director of Americans for Prosperity-Tennessee Grant Henry to the studio to discuss his in-laws’ experience with real communism and how Americans are born with liberty and freedom in their DNA that is being diluted by left-wing government propaganda its useful idiots.

Leahy: We are joined in studio by our good friend Grant Henry, the grassroots director for Americans for Prosperity, Tennessee. Good morning, Grant.

Henry: Good morning, sir. I’m happy to be back.

There was a report that several members of the US women’s National Team turned away from the American flag as a 98-year-old World War II veteran played the National anthem on his harmonica.

Henry: Completely opposite from that. I celebrated my Fourth of July, obviously spending time with friends and family. And in particular, having a conversation with my in-laws. My wife is her entire family is from Romania.

Leahy: Romania. Formally under Communist dictatorship. What? Ceaușescu is a terrible guy who was running it while the Soviets were they were part of the Soviet block.

Henry: Yes. And to hear them discussing it is an enlightening conversation, to say the least. And I’ll say right now if you have never had the pleasure of doing so, I would strongly recommend having a conversation with anybody you know in your life that may have fled communism.

My wife’s family did. My wife was the only first person in her family born in America. The rest of them grew up under communism. They fled Communism.

Leahy: Her parents were born in Communist-controlled Romania?

Henry: Well, obviously born in Romania prior to Communist control.

Leahy: Prior to Communism.

Henry: Prior to Communist control. And then tell stories about what that overtake looks like.

Leahy: That happened from the period of 1945 post World War II.

Leahy: When did the communist regime end there? 1990?

Henry: ’80 something. Don’t quote me on that but around that.

Leahy: So they were there during the period of the Communist take over. What was that like for them?

Henry: They told me a story yesterday in particular which somehow stumbled across this. Obviously, we were talking about July four th what it means to be an American.

We stumbled across this conversation of a term I’m sure everybody has heard before called a useful idiot. Which is a strange thing to bring up during the July Fourth conversation.

Leahy: Well, it’s a phrase. First, I think Vladimir Lenin wrote about useful idiots and he talked about people who were well-intentioned but ill-informed, and they advanced arguments that help Communists take control of Russia.

Henry: My father-in-law, his father owned a farm, and in the community was large enough that it actually fed the rest of the community with vegetables.

Henry: It is. And unlike other farms in the area, we just feed your own family. He said, right after the Communist take over, the strangest things started happening where one day a judge came back and just happened upon his farm.

And he said, hey, listen, I was just fired yesterday. I can’t find work anywhere. Can I have work at your farm? A couple days later, a couple of weeks later, a University Professor came back. Same exact story.

I was just fired from the University, and I can’t find work anywhere. Can I work at your farm? Eventually, a high-level banker came back.

Exact same story. And he realized that across the nation, the nation’s most intelligent had been fired from their positions and replaced by people that would not ask questions.

They had been replaced by people that certainly were not qualified for those jobs, but simply followed orders. And I’m telling you, Michael, it illuminated this term useful idiot for me in a way that I had never heard before.

He followed this story by saying, listen, Grant. You see, he has a little bit of broken English, though. But he said, you see, there’s something that you Americans tend to forget.

You Americans have liberty and freedom in your DNA. You are born with it. You’re born into it. You’re all born with the will to fight for what’s right. And it caused me to think. We’re missing this message.

Leahy: Well, that DNA, each generation is being diluted. It seems to me. And intentionally being deluded by all the folks on the left who are promoting the falsehood that America is bad.

America is actually the greatest country in the world. But they are making it so that kids going to K-12 public schools feel embarrassed about their country.

Henry: And we need to tell people again, this is one of the reasons why I love working with Americans for Prosperity. We find social change entrepreneurs.

We need to pitch the message that you are not a liability that needs to be taken care of or not some type of victim that constantly needs to rely upon the government for some type of handout or hand up. You can do it on your own. You are empowered.