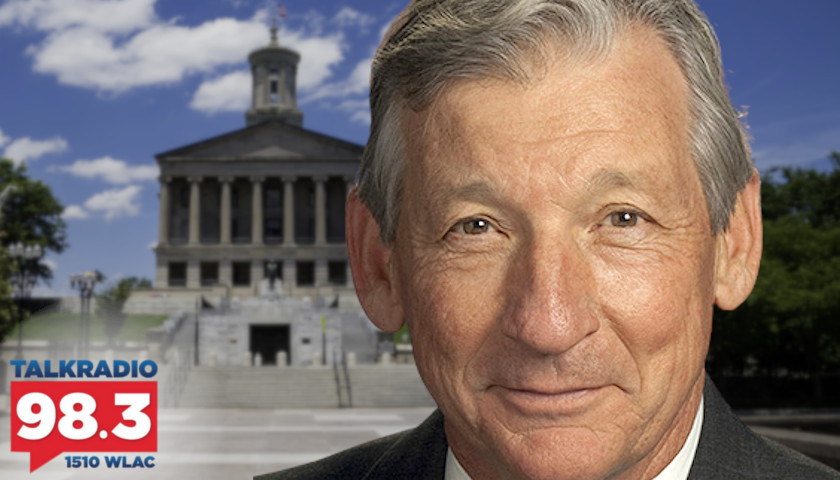 Tennessee State Senator Frank Niceley Talks About His Bill for Changing the Way We Elect Our U.S. Senators

During the first hour, Niceley explained his current bill addressing the elections of U.S. Senators and its historical perspective. He later touched on the need for parents and educators to teach our children about the differences between a Republic and a Democracy.

Leahy: We are joined now by State Senator Frank Niceley. Senator Niceley, thanks so much for joining us this morning.

Leahy: Well, you have been involved in Tennessee politics for some time. You’ve I guess you were first elected to the State House of Representatives back in 1988. You were elected to the state senate in 2012. And you are really one of the conservative icons of the Tennessee General Assembly.

Niceley: Well, thank you I guess. I don’t know what that means. But you get you need to remember I was gone 12 years  in the middle.

Niceley: A lot of it that does a politician more good. I think everyone should go home and some of us should stay home and few maybe can come back. I was in exile for a while and that I think I may learn more in exile than I did when I was in politics.

Niceley: Well, you start to really know who your real friends are when you get beat. And I was just thinking the other day about what Donald Trump is going through now and what I went through in 1992 and it doesn’t hurt so bad when the opposite party beats you for one year which when your own party turns on you a little bit, that’s what hurts.

I’ve always been fairly conservative. And in 1990 I was probably a little more conservative than the Republican Party in Tennessee would ready for and certainly not as much as the Democrats are ready for. But anyway, I’m back and persevered. Tennessee a well-run state – probably the best-run state in the nation. Everybody wants to change something and occasionally I think we need to change something. And then I get to think, why change anything? We’re the best-run state in the nation. We owe less money. We have the lowest taxes. We’ve got enough money to take care of retirees. Why change much?

Leahy: That’s a good point. There is one proposal that you’ve made several times. I don’t know if you’ll have it introduced in this current session of the Tennessee General Assembly. But you want to go back to the way the election of United States senators was before the Constitutional Amendment that came in 1913 that provided for direct election of United States senators. You have had in the past proposals to make the election of a United States senator here a function of how the members of the Tennessee General Assembly vote. Tell us the rationale for that. And is that something that’s on your agenda to propose this session as well?

Niceley: Well it is. And the problem is that you have to give everybody a history lesson every time you start talking about it. But more and more people are beginning to realize that the Founding Fathers were smarter than we are. And the Founding Fathers, I don’t know how they did it. I’ve been on a lot of committees. I’ve never been on a committee that could hold a candle to them.

We got the income tax and the Federal Reserve and we changed the way we elected our senators and we drifted away from being a Republic toward being a democracy. Well, democracy was a bad word in 1776. No one talked about democracy. It’s not mentioned in the Constitution, the Declaration of Independence or any state constitution mentions the word democracy.

But basically what we would do is we would let the state legislature, the Republicans would dominate the U.S. Senate nominee for the Republican side the Democrats for the Democrat side. It would keep these U.S. Senators from having to run through a primary. If you get to thinking about it, a man of the caliber or a woman of the caliber that we’d want to send to the Senate probably doesn’t have time to run around the state for a year and a half in a primary.

So this would kind of eliminate the primary and we would have an indirect election for the nominee. And it would be a tough vote. I mean, I would have people wanting to vote for Michael Patrick Leahy and have people want to vote for this one of that one. It’d be a tough vote for the legislature. But it would the U.S. senators who would probably pay a lot more attention to the state legislatures than they do now.

Leahy: That’s the key point, isn’t it? Because under the current system the United States senators don’t really pay any attention or very little attention to the desires of the state legislature. That’s how I read it.

Niceley: Yes, very little. But we’ve got two great senators right now but there’s nothing personal about this. And I hope there our senators wouldn’t take it personally if they do a good job. I’m sure we would nominate them back. But you know in the big scheme of things, say 10 red states decided to do this, it would have one congressman that would say it would change Washington overnight if the U.S. senators started paying attention to what the state’s really wanted and needed instead of who they listen to now. Who probably are the big contributors.

Leahy: I like your proposal Senator Niceleybecause what it does is it goes back to the founder’s original intent to have the state’s sovereign in many areas. I find that since 1913 the national federal government has usurped many many powers that the founders meant to be powers of the states. What do you think of that?

Niceley: You’re exactly right. And that was a big fear. If you go back and read the original papers the big fear was that the federal government would usurp. We need to teach our children what usurp is. And we may have to teach our high school teachers what usurp means. And you don’t pour it on your pancakes. (Leahy chuckles) But they worried about the federal government usurping the powers of the state.

And their fears were right. I mean that’s what they’ve done. When the final history and I say well what happened to the United States of America? Everybody will have a different opinion. Well, it was this and that. I think it was that 1913. It was a bad year. And one of the bad things that year was the way we changed electing our U.S. senators.

Niceley: Most people don’t realize the value of a republic. … “Republic” has been kind of pushed back in the corner somewhere and everybody talks about “democracy.”

But “democracy” is nothing more than two coyotes and a sheep voting on what’s gonna be for lunch. (Leahy laughs)

Niceley: A Republic protects the rights. If you don’t like the way Tennessee’s operating my go to Oregon. if you don’t like Oregon, you know go to Michigan. It gives us somewhere to go. But when the federal government takes over and they come down with this one-size-fits-all, there’s nowhere to go.

Leahy: Well, it sounds like I am going to invite you to be our special guest at our fifth-year event. You probably haven’t heard about it. We hold a Constitution Bee every year here for high school students. And now last year for the first time we opened it up to high school students around the country. We gave away educational scholarships last year.

The winner got $10,000 educational scholarship. Second place gets $5,000 and third place gets $2,500. We’re going to hold this year’s National Constitution Bee in Brentwood on October 23. I’d like to invite you to come and be a guest speaker to our kids and talk a little bit about your view of the difference between a republic and a democracy.

Niceley: I’d be glad to. That would be great. And I mention this when I make speeches around the Lincoln Day dinner. It’s up to us to educate our children. We can’t depend totally on the school system. The parents have got to educate them. And there are several words that these young people need to know and that they need to understand and to be able to know exactly what they mean.

Usurps is one. Democracy. Republic. We throw them around but a lot of time they go over the head of our children and they don’t understand what we’re really talking about. But one advantage of this proposal that I have is that it would take care of term limits. People say well we need term limits. Well, those term limits are another way of depriving you of your right to vote. If you have a good politician and if you should ever be lucky enough to get a good politician you’d certainly want to keep them.

Well if you’ve got mandatory term limits they’d be gone with the rest of them. But back in the days when the state legislatures nominated or elected the U.S. senators, they didn’t stay very long because of different reasons. The legislature would get tired of them or they got tired of being up there and all they could do was the work of the states.