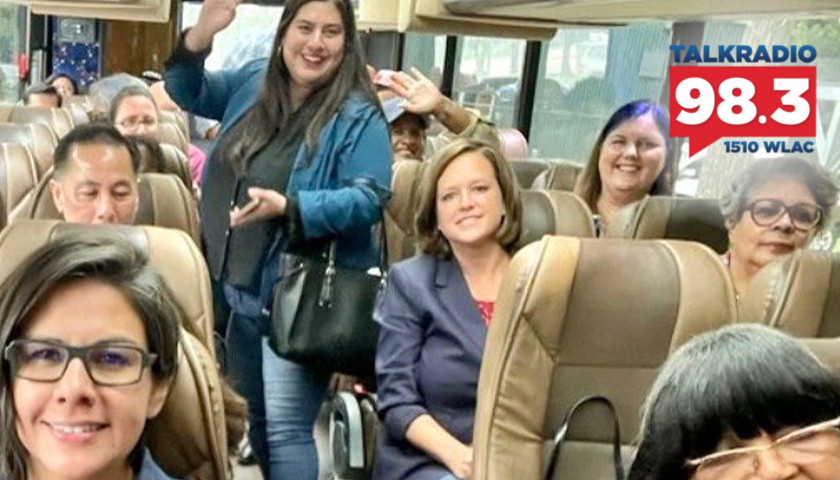 Live from Music Row Thursday morning on The Tennessee Star Report with Michael Patrick Leahy – broadcast on Nashville’s Talk Radio 98.3 and 1510 WLAC weekdays from 5:00 a.m. to 8:00 a.m. – host Leahy welcomed former Tennessee Speaker Beth Harwell in studio to talk about her background and weighs in on the Texas Democrats that fled their legislative duties.

Leahy: We are delighted to welcome to our microphones the former Speaker of the Tennessee House of Representatives, Beth Harwell. Good morning, Beth.

Harwell: Good morning! Good to be with you this morning.

Leahy: Well, it’s great to be with you as well. And, you know, we were talking a little bit off-air about this. One of the things that we’ve tried to do with this program is to bring state legislators in and to kind of talk to them, get to know them, and learn kind of what their motivations are.

One of the things that are interesting is when we started this, we have a particular ideology that we promote. And there were a couple of contentious issues.

And we know that some of them were moderate members of the House and the state Senate. We kind of took exception to some of our reporting.

But what we found is many of those people we’ve had in studio here, and we’ve got to know them and talk to them about it, and it’s very interesting because once you get to know somebody well – you probably know this from your long record in public service –  you just sort of understand their motivations and you don’t get focused so much on the ideological differences. And so we found it very interesting to talk to these legislators.

Harwell: And I just wanted to thank you for that. I reached out to you just to say thank you for covering state government so well and including state legislators.

At the bottom of the day, state and local government impact your life within the federal government. We may not realize that, but it’s certainly true.

And I’m just pleased to see that we have a strong state legislature that’s doing its job and commend you for covering them.

Leahy: The greatest state in the United States of America, beyond a doubt, is Tennessee.

Harwell: You got it.

Harwell: It is. You understand that. You see all these people moving here, there’s a reason.

Leahy: Who wouldn’t want to live in Tennessee?

Leahy: I mean really, no state income taxes, nice people, a good business environment, and a state legislature that is not full-time.

Harwell: That’s correct. I think that’s really refreshing. You hear so much from people in Washington who come and say to you that they’re visiting in their district. (Leahy chuckles)

Well, my legislators don’t visit in their districts, they live in their districts. They go to church with their fellow citizens. They are members of exchange clubs and Rotary Clubs, so they’re involved in their community.

And I think that makes a tremendous difference. And the other vital thing to realize is that they live under the laws that they pass for everyone else. And that’s a great thing.

Leahy: Just as an aside as a former speaker of the Tennessee House, what’s your reaction to this, this is my term, not yours, the flea baggers, 67 Democrat members of the Texas House of Representatives, who when the governor called a special session to address election integrity bills, instead of participating in that, these 67 Democratic state legislators got in two chartered private planes not wearing their masks – a violation of numerous FAA rules and regulations, I believe.

And then they flew off to Washington, D.C. so that the Texas House of Representatives now does not have a quorum and can’t conduct business.

As a former speaker of the House of Representatives in Tennessee, how do you react to that?

Harwell: Well, it angers me. It truly angers me. And I absolutely agree that when they return home, they should be arrested.

They have a responsibility. If they don’t want to live up to that responsibility, you don’t run for office. But at the state legislative level, you have to be in attendance for the legislature to conduct its business.

And that’s totally unacceptable for them to have walked off. And it was just a publicity stunt. What was the point in going to Washington, D.C.?

Leahy: To have lunch with Kamala Harris apparently.

Leahy: As I say, the legal but not legitimate vice president of the United States. My words, not yours. Beth, it’s interesting about this.

I saw that Governor Abbott, who is a pretty clever guy, said if we do these special sessions, I call them in 30 days, and if they’re not here and the 30 days is over,

I’m going to call another special session until the election of 2022. Apparently, these Texas Democrats may be outside the state for some time.

Harwell: For some time, yes. And, you know, it’s kind of a shame because they’re not even living up to their responsibility as the minority party.

As the minority party, you have a responsibility to try to make legislation better, to give your input. And they’re not doing that.

And now I’m a big believer in strong elections and strong controls on elections. And I think anyone that believes in fair democracy will believe that’s a good idea.

So I’m supportive of what the Tennessee legislature is wanting to do. But even if I wasn’t, I feel like I’d have a responsibility to sit at the table and try to help.

Harwell: I don’t. Now they came close during the agonizing state income tax.

Harwell: But we stayed and we worked it out. But there were some threats during that time. But during my tenure, I don’t recall any of that.

And by the way, I have to say on that note, you mentioned it earlier, we can be very proud that we don’t have state income taxes.

And one of my major goals when I became speaker was to eliminate the haul income tax. Because until we did that, we still technically had a state income tax.

Leahy: And tell our listeners what the haul income tax is – and I’m gonna say this – what it was.

Harwell: Yes. What it was. Which is a beautiful word.

Harwell: Yes. What it was. Well, it was a tax on dividends. And it really hurt working people because they save their money all these years.

And then when they came to retire, they had to pay this tremendous haul income tax – was a real incentive for people to move their assets to Florida. And we knew that we were losing people because of that.

Leahy: Of course. People are logical and rational.

Harwell: Right. But what I respected was we figured out a way to phase it out over a number of years so that the state budget was not harmed at the time.

We were not flooded with money the way they are now. So we did it in a very fiscally responsible way. But to eliminate a tax when you have the ability, that’s a wonderful thing.

Leahy: I should know this, Beth, but I’ll just ask you here on air, where are you from originally?

Harwell: Originally, I’m from Pennsylvania. I grew up there. But I came to Tennessee in 1974 to attend David Lipscomb University.

Leahy: David Lipscomb. Did you go to Lipscomb?

Harwell: Yeah. Went there for four years. Loved it.

Leahy: No kidding? Are you Church of Christ?

Harwell: Yes. I was raised Church of Christ. And in Pennsylvania, there are not many of them.

Leahy: No, they’re not. Well, we have something in common. I’m also a Church of Christ.

Harwell: I didn’t realize that.

Leahy: Converted just before I married my lovely wife, who’s from Texas. And, of course, as you know, the Church of Christ is centered in Tennessee and Texas.

Harwell: And Texas. Right. I had a sister who went to Abilene Christian.

Leahy: My lovely wife went to Abilene Christian. My daughter went to wait for it … Pepperdine.

Leahy: Which is technically Church of Christ.

Leahy: But it’s in Malibu.

Harwell: My other sister went to Harding. So we’ve got all the Church of Christ covered this morning.

Leahy: Absolutely. In Searcy, Arkansas. Lots of people in Nashville went to Harding.