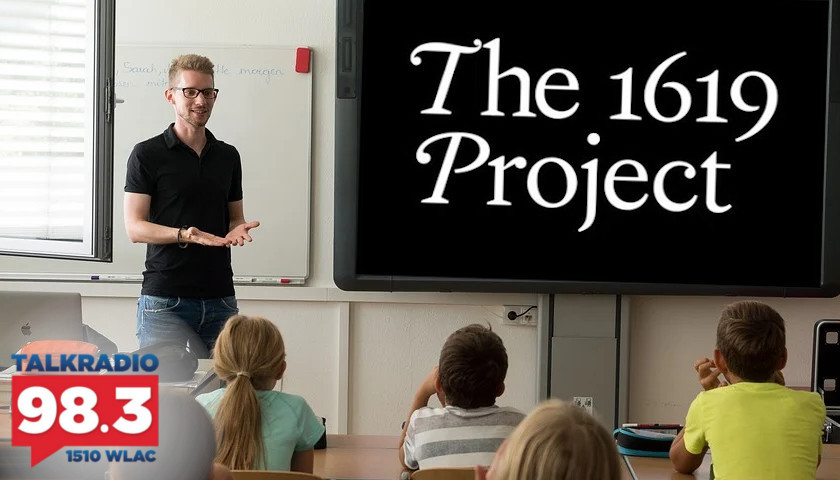 Peter Wood Author of 1620: A Critical Response to the 1619 Project Talks About His Book and What Inspired Him to Write It

Live from Music Row Thursday morning on The Tennessee Star Report with Michael Patrick Leahy – broadcast on Nashville’s Talk Radio 98.3 and 1510 WLAC weekdays from 5:00 a.m. to 8:00 a.m. –  host Leahy welcomed President of the National Association of Scholars and author Peter Wood to the newsmakers line to discuss what prompted his new book, 1620: A Critical Response to the 1619 Project.

Leahy: We are delighted to be joined on our newsmaker line by Peter Wood. He’s the President of the National Association of Scholars and the author of 1620: A Critical Response to the 1619 Project. Welcome, Professor Wood.

Wood: Well thank you for having me.

Leahy: Well, look, I was watching CSPAN the other day, and there you were making a logical response. Very compelling. I was delighted to hear you talk about your response to The 1619 Project. Tell us a little bit about The 1619 Project and what’s wrong with it.

Wood: About a year and a half ago, in August of 2019, The New York Times ran a special edition of its Sunday magazine. They titled it The 1619 Project.  So literally what the project is, is it’s a 100-page newspaper supplement. What it did was declared that the real history of America began in the year 1619, when a ship brought 20 some slaves to what was then Jamestown, Virginia. That was the claim made.

And from that point on, according to The New York Times, and its principal author of this a woman named Nikole Hannah-Jones, America was a slaveocracy. That was the beginning of White supremacy and the beginning of 400 years of misery, oppression, exploitation of black people by White people. This wasn’t just an ancient history lesson, though.

The claim was that everything that’s happened since then has been through the filter of White supremacy. So The 1619 Project goes on to declare that America’s founding principles were a sham and illusion that were never intended to be taken seriously. That the American Revolution was fought by the White colonists in order to preserve the institution of slavery from the threat that the British might abolish slavery.

That Abraham Lincoln was a racist who created the Civil War in order to exile Blacks from off the shores of North America and on and on. This is kind of an elaborate fantasy that tells the tale of things that truly never happened and distortion of things that really did happen.

Leahy: How can such distortion of fact be presented by The New York Times as fact and then be sent into virtually every one of our K-12 public schools around the country?

Wood: Well, it’s a wonderful instance of how propaganda works. You set up some lies and you repeat them endlessly. You pay people to repeat them for you, and then you recruit people who don’t know any better to amplify them. So what The New York Times did was link with the Pulitzer Center to turn this into a curriculum and then recruit school districts around the country and history teachers to start teaching it. And that’s exactly what they’ve done.

The New York Times has spared no expense. Many millions of dollars. It did a television advertising campaign for the first time in the history of that newspaper. It has been presenting it as fact to all the world. And low and behold, the Biden administration has bought into it. So we now have a presidential endorsement, as well as all of the apparatus that a wealthy newspaper can bring to the table.

Wood: I certainly am. My offices are on Madison Avenue, right in the heart of Midtown. So I’m in the belly of the beast.

Wood: (Chuckles) Well, stranger things have happened. I have noticed that Nashville, Tennessee has become one of the islands of sanity, relatively speaking, in this dire time.

Leahy: More specifically, it would be Middle Tennessee in the state of Tennessee. The city of Nashville is a little bit woke, but you can come here and help fix that. By the way, just in case you’re considering it, we have no state income tax in Tennessee. (Wood moans) Nor is there any city tax. So just think about it. How did you decide that you’re going to take the effort to put together 1620: A Critical Response.

Wood: Well, it wasn’t a hard decision. For my sins I get The New York Times delivered to my door every morning. So I woke up that morning and read what was in this magazine. It was a jaw-dropping experience. I know enough American history to recognize falsehoods when I see them. So the next day, I called my staff together at the National Association of Scholars.

That was before we’ve been shut down and sent to the four winds. And we decided that we needed to make a concerted effort to repute this thing. We started calling up historians and getting them on tape and interviewing people about it. And after a few months of that, it was clear that there was enough going on that something more was needed. So I began working on that book.

Leahy: So the book 1620 A Critical Response to the 1619 Project as a counterpoint to what happened in 16 19 in Jamestown, Virginia, when 20 African Americans or Africans were brought to Jamestown, you focus on 1620 when something else happened.

Wood: Yes. In November of 1620, a small ship had made its way across the Atlantic had been blown off course and ended up off the coast of Massachusetts. We know that ship is the Mayflower. It had on board about 102 passengers. And of those, fewer than half were people that we now call Pilgrims. The rest were settlers that were hoping to become farmers in Northern Virginia.

They were very unhappy to be off the coast of Massachusetts and declared that they were going to go their separate ways. The religious centers, the pilgrims that originally were from Holland thought that was a bad idea. They negotiated. They quarreled. But ultimately they came up with a short agreement that we call the Mayflower Compact, which set up rules.

Basically, they decided since they were now outside the territory controlled by England, they were going to have to be self-governing. And that meant figuring out a way to live together despite their religious and political differences. So what that did was it became something like an early version of the Declaration of Independence. It was a charter for how to govern themselves. Despite their differences, it pointed to basic religious freedom.

They decided they were going to tolerate one another. They were going to live under the rule of law, and they were going to respect those laws by electing their own leaders and legislating their own rules. That Mayflower Compact eventually became the template model for how Americans would govern themselves. First in New England and around the rest of the country. It’s set up the pattern of a small town that was essentially self-governing and never got forgotten.

Leahy: Exactly. Now, Here’s what’s interesting. My question to you. So your pushback on 1620 was published in November. What has been the response to your pushback?

Wood: Well, the conservative response has been tremendous. The book has sold very well and is getting lots of interviews like this one. The response from The New York Times has been crickets. Of course, they don’t take notice of anyone who criticizes them. I would say that it’s becoming clear to many millions of Americans that this thing is in their schools. Their kids are coming home with very strange stories about the American past. Almost everybody now has heard of critical race theory and these ideas that America is a slaveocracy or White supremacy has invaded everything and that implicit racism is everywhere.

The 1619 Project was the launching platform for those ideas where this stuff first entered the mainstream, so to speak. So I think we have a culture war. The old culture war is back with a vengeance. This time around it’s trying to throw sand in the eyes of Americans. To understand our past we have to understand it as a place that is fundamentally and deeply unfair, and that racism is at the heart of everything that goes on. I think there’s an appetite by Americans to push back against that.