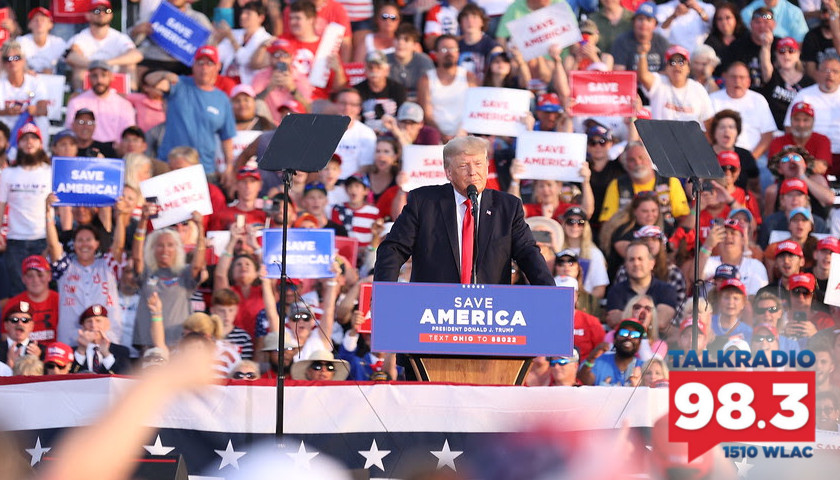 Leahy: In studio, the mayor of Maury County, the bastion of freedom, here in Tennessee. Andy Ogles. Good morning, Andy.

Leahy: We were talking, of course, about Laura Baigert, The Star News Network, and The Tennessee Star reporter who had the exclusive interview on Saturday for half an hour with former President Donald Trump.

Road in the limousine from the fairgrounds rally to the airport with him. It was a great interview. She wrote it all up. And now it’s interesting, the president has done a couple of things, former president, to get out there in the public.

First, this rally, we’ll talk about that rally in a bit. Then the interview with Laura, the exclusive interview. Today at noon former President Trump will be guest for much of the hour I am told here on the Clay Travis and Buck Sexton Show broadcast here on Talk Radio 98.3 and 1510 WLAC from noon on.

So again, I think the former president has said, okay, I’ve had my five months of rest and relaxation. I am ready to take on the maladministration policies of Biden-Harris. Any thoughts on that, Andy?

Ogles: I think what they’re doing and the president has stated publicly is the 2022 election is critical. Obviously, I think he would like some closure with the 2020 elections. But you also have to look forward to 2022.

And I can only speak anecdotally as I’ve been speaking to communities across Tennessee. But there’s a lot of angst. I think for some, it’s these critical race bananas that are going on. You’ve got the election and the turmoil there, and then you just have COVID fatigue.

People are sick and tired of the shutdowns and the lockdowns and the infringements on liberty and freedom, even if they were scared of the virus. Instinctively, we’re a nation of people who believe in freedom.

And so people are fed up. And I think what you’re seeing is former president is on a full-court press to make sure that we take back the House, we take back the Senate. Sometimes people will fret about gridlock in Washington, D.C. Gridlock is a great thing because the more gridlock there is, the list of our money they’re wasting.

Leahy: Yes. I  could not agree with you more on that. Let’s go back to the media misreporting on former President Trump. Now I have a couple of little funny stories here. Do you know how in those rallies the media is in what they call the media pen?

It’s usually a set of risers. And you’ll have the usual suspects there, CBS, NBC, ABC, MSNBC, CNN, they all have cameras there. Now, increasingly, I’m seeing more kinds of conservative news outlets. The Star News Network was there.

Of course, we were there. We didn’t have video cameras, but we were there. And Real America Voice News, for instance, was there. I think One America News was also there. Those are more kind of conservative outlets.

But what’s interesting and was kind of fun and it’s a bit of theater in every one of Trump rallies. And he did it again, this first post-presidency or the interim presidency. The interregnum, shall we say, between Trump 45 and Trump 47, which is what would happen if he were to run and get it elected in 2024.

He always rails at the fake news media. And you know what happens when he does that? He points to the media in the media pen. And the crowd turns around. And with a variety of hand gestures, shall we say, indicates to the press their opinion of them. (Laughter)

Visually, you can understand what those hand gestures might look like and they give them boos. Now we’re there. And we’ve been reporting fairly on the former president for all this time.

And it’s just sort of fun because there’s a crowd yelling at us, we’re standing next to the CNN people. And CNN people are shrinking and scowling. I’m just laughing. It’s just like it’s a wonderful moment to be there and experience that.

And, you know, you don’t say, hey, we’re not like them. (Laughs) It’s kind of fun. I don’t know if you’ve ever seen one of those. It’s kind of fun to see the way they react shall we say.

Ogles: Sure. But he’s right. I think we all get fed up with journalism and journalistic integrity, by and large, is dead right now. And I don’t know how you get that back. The old days of good journalism.

Everybody has an agenda. Everybody has an opinion. But people actually trying to report the news versus every news piece now seems to be more commentary. It’s like, where do you get good, honest news?

Leahy: Well, of course, at The Tennessee Star and the Star News Network. But, of course! but, of course! now a little thing that I’ve been working on for some time. There’s always this crowd size game, right?

There’s always a crowd size game. And the establishment media will kind of report in a way that minimizes crowd size, Ridiculously. For instance, with this particular crowd what I’ve always found is when you’re trying to report crowd size, the very best thing to do is go to a police officer.

And when you’re reporting it, instead of you saying the crowd size, go to a police officer and say, do you have any estimates on crowd size? And often the police have a pretty good sense of that, and they’ll give you something sometimes.

Leahy: I just can’t use that. We were too far in the back. I can’t quote a police officer saying that. If they had said, yes I’d estimate 25,000 to 30,000 I could use that. We actually had heard from one of the wire services, I won’t say the name AP.

I won’t say the name AP. One of the wire services there looked at the crowd and they said it’s about 500 people. Are you nuts?! I’ve been doing the crowd size thing for 15 years since I started the Tea Party movement.

And so I kind of tried to do my best crowd estimate. And looking at the various elements in the venue, the people and the chairs and the main venue and the people along the sides and in the back, I said it was at least 15,000.

So when I wrote a separate story at Breitbart News about it, I said an estimated crowd of 15,000. Interestingly enough, we’ve reached out to the folks there at Lorain County Fairgrounds, and apparently, we got back today an official estimate of 28,000 to 34,000.

Now you just showed me a photograph taken from the very top of the grandstand behind the stage where the president spoke. And I’m looking at that. And it is basically people as far as you can see.

Ogles: I compare that photo to MuleFest that we had in Maury County with Trace Adkins and the estimate from that concert that Friday evening was between 20,000 to 22,000 people.

And what I can tell you is if you were to overlay that photograph on top of that one, there are more people there than that were MuleFest. So, you know, there were at least 25,000 people based on that. Again, we have an accurate count of our event. That’s more. That’s incredible.

Leahy: What I was going to say about that is because there were no official estimates when I wrote that for my Breitbart story on it. And so I put that out as sort of the floor an estimated 15,000.

I felt very comfortable with that number. But now, looking at it, I think the number of 28,000 to 34,000 that Lorain County has given us is probably more accurate.

Leahy: I bring that to your attention because the establishment media are saying, well, it was a small crowd. (Ogles chuckles) I don’t know if this surprises you, Andy, but they are a bunch of liars. It was a huge crowd.

Ogles: That goes back to my other comment and everything’s relative, right? You have 30,000 people show up in this little small town. So it wasn’t like it took place in Legislative Plaza and Nashville in a big city. You have people who drove 30 minutes, an hour and a half, two hours to get to this venue.

Leahy: The bottom line is there was a huge crowd in Wellington, Ohio, on Saturday to listen to an hour and a half vintage Donald Trump. (Laughter)