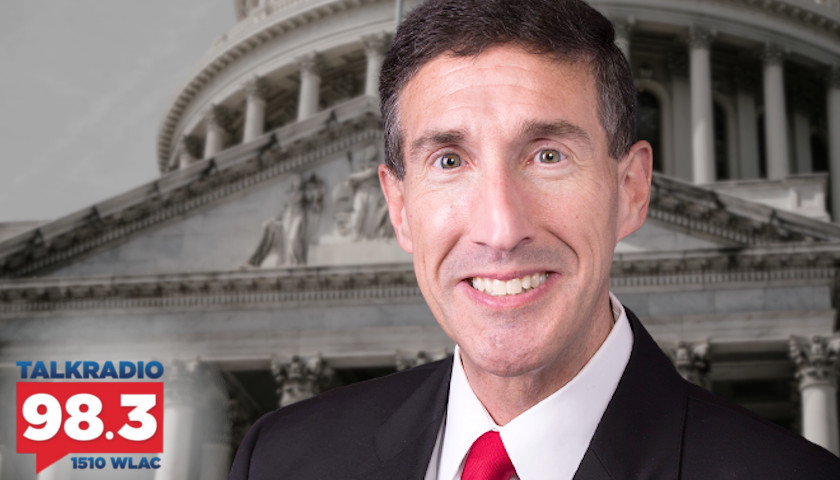 Leahy: Tennessee, joined on our newspaper line by Congressman David Kustoff, a Republican who represents the Eighth Congressional District in Tennessee, which stretches all the way from a little bit West of Nashville, all the way down to Shelby County, the Memphis area. Welcome, Congressman Kustoff.

Kustoff: Good morning. Thank you for having me.

Leahy: How are you holding up in the crazy land of out-of-control Nancy Pelosi?

Kustoff: Well, I think you really summed up pretty well. Pelosi has made Washington help to create this toxic atmosphere. And you look at the priorities that she said, starting with the election bill, that you’ve been talking about, that federalize elections across the nation and it’s really scary. The power that the federal government is trying to implement on state and local governments all over and it emanates from Pelosi, the progressives, and the left side.

When you look at what she’s trying to do with elections, we’ve talked a lot and we’ve heard a lot about what’s going on in Georgia. It may not matter. If Pelosi’s election bill, which the bill number of anybody is following it is HR1, which means in her world, this is the most important bill that Congress is going to consider over these two years, it’s a complete domination of the election process by federal officials.

Leahy: In my view, it’s also unconstitutional. I like the name that I think speak former Speaker Newt Gingrich came up with for it. The Corrupt Politicians Act. Tell us about some of these.

Kustoff: (Chuckles) Well, that’s a good lead-in because it’s very broad. It’s very comprehensive. I think Speaker Gingrich is exactly right because I look at Tennessee in my area of Tennessee and I think that that we handle elections and we administer elections very fairly. People have plenty of opportunities to vote that one time. They’ve got several weeks of early voting. Extended hours. We make it pretty easy.

One thing that we require, which I think is exactly right, is voter identification. Just like when I go to the airport to fly to Washington every week, I’m showing the TSA official my driver’s license to show that I am who I am. Nothing unreasonable about it. Pelosi’s election bill gets rid of that voter ID requirement. And so it doesn’t matter what Tennessee’s law is as it relates to voter ID or any other state, it would be nullified.

It mandates the mail-in ballots. It mandates the drop boxes. But going back to your question with Speaker Gingrich, and this is incredible. I want people to really try to wrap their arms around this because it’s hard. It would create this bill, a six to one federal political donation match for all donations under $200. So picture this.

If Joe Smith gives Bernie Sanders a $200 donation, the federal government is going to chip in $1,200 to the Bernie Sanders reelection campaign. Now, that really makes no sense. And by the way, that would be funded with a tax increase. So you can see it’s a complete domination of elections by federal authorities. And it injects corruption into the process just as Speaker Gingrich says.

Leahy: Well, next time you’re meeting with Speaker Pelosi, I’m sure she regularly schedules meetings with the Republican members of the House. Not.  But I have a message for her from Tennessee, direct from Tennessee. If the Senate passes the Corrupt Politicians Act and if the House then approves a conference committee, whatever it is, if it’s signed into law, she can take that law, and we’re not going to comply with it here in Tennessee. The state of Tennessee is going to push back. That I can guarantee you.

Kustoff: Well, I think that to your point a little bit earlier, I think that there are a lot of state attorney generals around the nation, the would challenge the authority and the constitutionality of this law to overstep and override their own state laws. And that would be appropriate. It’s a complete overreach. You just talked jokingly about sitting down with Pelosi. Here’s the stage right now.

The majority in the House of Representatives, there are 435 Congressmen and women, the magic number is 218. Now you’ve got some vacancies. You’ve got a Democratic congressman who passed away the other day. Right now, the count in the House is 218 Democrat Congressmen. And as of next week, there’ll be 212 Republican Congressman. And there are a few vacancies. So my point is that it is very very tight. It can’t be any tighter in the Senate.

50 Republicans, 50 Democrats. You would think at this point in time that Pelosi would reach out to Republicans and say, look, we don’t have the numbers to try to cram stuff down your throat and down the American people’s throat. Let’s see where we can find some common ground. Let’s get some stuff done for the American people and let’s get things going. But that’s not her strategy. That’s not her tactics. That’s not who she is. And that’s why until November of 2022, we’re going to have to fight like heck for our country.

Leahy: Now, let me ask you this question. Those 218 Democratic members of the House of Representatives, is there any single one of them that you’ve met who has the courage and convictions to stand against the lies of Nancy Pelosi? I mean, really. And when it comes down to it, will anyone stand for America on the Democratic side, or are they all in fear of Nancy Pelosi’s wrath and just going in lockstep with this attempt to destroy our constitutional Republic?

Kustoff: Well, believe it or not, the answer is both. There are some Democrat congressman who want to do the right thing and who think that she overreaches and think that the Democratic Party is moving and has moved too far to the left. But at the same time, they know her power and they know what she can do to them.

And seen some moderates get totally wiped out and get primaried by people to their left and to their progressive side because they don’t cow-tow to where the Democratic Party is today. You’ve seen them wiped off the board the last two and four years, and that’s really too bad. So there are a number of them who get it. But at the same time, she wields a lot of power.

And to her credit, she’s a terrific vote counter. And so she’s not going to put a bill on the floor of the House of Representatives unless she’s absolutely sure that she’s got the votes to pass it. And so that’s the real rub. To me, we talked about this election bill that Pelosi named HR1. You didn’t see Democrats fighting against it, arguing against it, or voting against it. And that’s because of the tremendous control that she has.

Leahy: They are afraid of her.

Kustoff: I really do think a number of them are. And believe it or not, they may be as scared of somebody like an AOC as they are Pelosi.

Leahy: Jim Cooper here is about to be challenged by Nashville’s version of AOC, Odessa Kelly, who if elected, would be the first Black lesbian member of Congress from Tennessee. And she’s all-in in terms of the left-wing agenda of AOC. That is I guess is one thing that they may be concerned about. Final thoughts from Congressman David Kustoff.

Kustoff: Yeah, well, it’s a tough time in our nation’s history. We’ll get past it. I really feel very good that we’re going to get the House back in Republican hands in November of 2022. But it is going to be a real fight, and I’m going to continue to make that fight.

Leahy: From your lips to God’s ear.