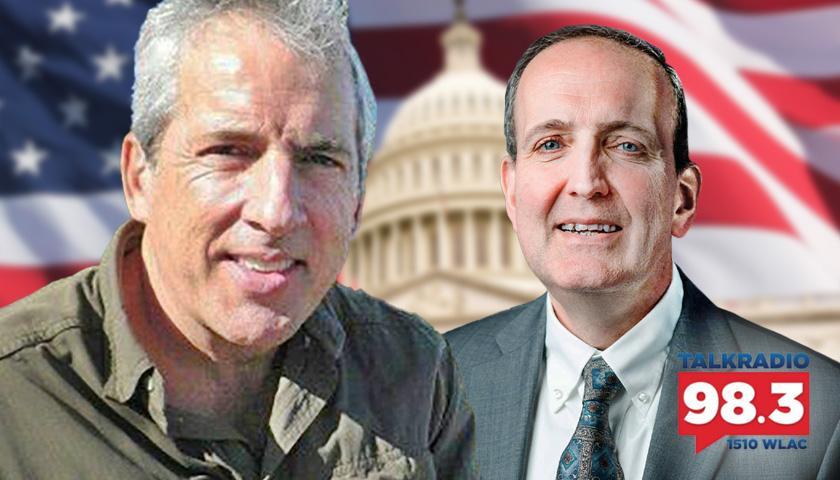 Leahy: On the newsmaker line right now by a very good friend, our favorite East Tennessee grassroots activist and retired attorney Mark Polio. Mark blogs at Misrule of Law and always has something very interesting to say about our constitutional form of government. Good morning, Mark.

Leahy: Well, we’ve asked you to take a look at this book that Paul Moreno, the Hillsdale professor of history, has written: How the Court Became Supreme: The Origins of American Juristocracy.

We’re going to talk to him at 7:15, but we want to get a sneak preview from you. Does he make the case that the courts have gone gotten out of control?

Pulliam: He does make the case, and he makes it very effectively. What is unusual is that it takes a history professor at a college rather than a law professor in legal academia to make these points.

One of the peculiar things that have happened in the last 30 years or so is that law schools have been captured by the Left in a way that even higher education generally has not. Law schools have become dominated by liberals more than almost any other academic discipline.

So what passes as constitutional law scholarship coming out of the law schools, reflected in the law reviews, et cetera, is all pretty uniform. And when I read this book and I had a hint that it would be sort of something refreshing from some of his previous work in labor law and labor history, it is a breath of fresh air.

He looks at the state of constitutional law going back to the founding. He tracks every Supreme Court – not every decision – but traces the evolution of constitutional law from John Jay, the first chief justice, to the present, and looks at stuff without the conventions and blinders that are so prevalent in legal scholarship.

And he makes the case that the court has usurped prerogatives that properly belong to either the executive, the legislature, or, in many cases, the states themselves, by undermining the concept of federalism.

This began when the progressives, with the assistance of Franklin Delano Roosevelt, hijacked the Supreme Court during the New Deal. But he makes the case that it really went off the rails under Earl Warren.

And just now, with President Trump’s appointment of three so-called originalists to the Supreme Court, are things returning to center. And we saw just this past term the overruling of Roe versus Wade, which was a good sign, but much needs to be done.

And I hope that this book gets a lot of attention because it makes the case in a way that no legal scholar today does. And in my essay for Law & Liberty, I say that this book is the boldest statement of constitutional law since Robert Bork’s The Tempting of America in 1990.

And that’s sort of a sad commentary that we don’t have scholars like Paul Moreno making this case in law school, which, after all, is where constitutional law is taught and where future constitutional litigators are being trained.

And instead, you see this echo chamber exists. People like Amy Wax at the University of Pennsylvania are being harassed, being stripped of their teaching responsibilities, and even possibly losing their tenure for saying things that were not considered controversial 30 years ago, but have become heretical now.

Leahy: Tell me this. He proposes solutions. What are the solutions?

Pulliam: Given our constitutional system, the only real solution is to appoint good people to the Court and to enforce upon them, through a consensus of the discipline to interpret the Constitution in accordance with the intentions of the Founders.

One of the comments that he makes is in his last chapter, where he surveys recent developments. And he takes Neil Gorsuch to task, who is one of the Trump-appointed originalists and who wrote a controversial opinion in the case of Bostock v. Clayton, which interpreted the Civil Rights Act of 1964, Title VII, the basic employment discrimination statute to prohibit discrimination on the basis of sexual orientation – which was the last thing that Congress had in mind when it passed this law in 1964.

And he ridicules that decision, and properly so. And so there’s only so much that the other branches can do to bring the Court into a more grounded approach. But one of them, and probably the most important technique, is to reinforce good decisions and to criticize poor decisions.

And so that is what he, as an academic, is doing. He is showing how many of the decisions that have been made by the Supreme Court in the last 50 years are simply not grounded in history or in the intention of the Founders.

Leahy: To me, that doesn’t sound very powerful. That’s long-term, isn’t it?

Pulliam: There’s only so much you can do in terms of constraining the Court. The Left has come up with a number of devices that are going to pack the Court. You can propose constitutional amendments, but those are very difficult to implement.

What he points out is that one of the things that kept the Court grounded is the other branches pushing back, sometimes vocally so, like Abraham Lincoln taking on Dred Scott. And as a result of that, the Court was never able to let this go to its head. The problem that we’ve had in recent decades is that the Court has become grandiose.

Pulliam: And the concept of judicial supremacy in Cooper v. Aaron in 1958, where they said – and this is something that you could look through the Federalist Papers and not find any indication of this – but the Court said that our decisions, our interpretation of the Constitution, is supreme, just like the Constitution itself is supreme.

They put themselves on a pedestal. And he makes the point – it’s really the thesis of this book, is that this notion of judicial supremacy is completely unsupported by history, is a grandiose concept, a usurpation of power, and the way that you get them to go off of that is, you basically ridicule it and you point out that it’s unfounded.