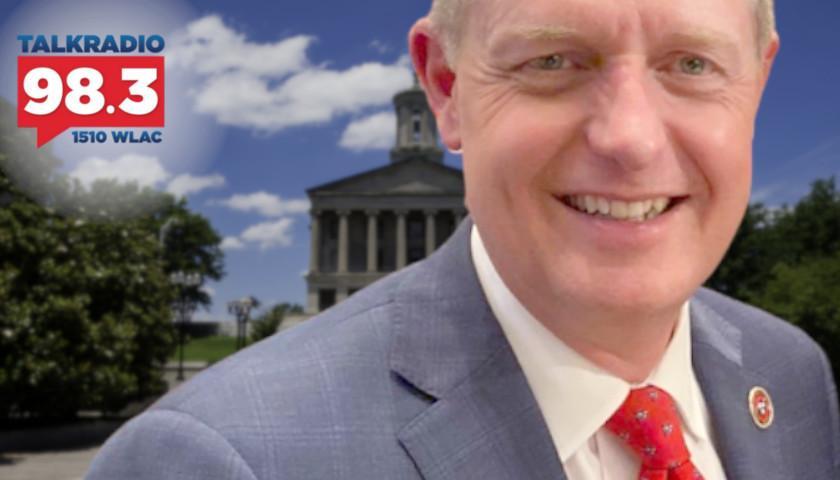 Across the State, Senator Jack Johnson Sees Signs of a Red Tsunami in Tennessee Midterms

Live from Music Row Thursday morning on The Tennessee Star Report with Michael Patrick Leahy – broadcast on Nashville’s Talk Radio 98.3 and 1510 WLAC weekdays from 5:00 a.m. to 8:00 a.m. – host Leahy welcomed Tennessee Senate Majority Leader Jack Johnson in the studio to talk about campaigning for other Republican Tennessee House and Senate candidates and the sentiment of blue-state refugees.

Leahy: In the studio, our very good friend, State Senate Majority Leader Jack Johnson. Jack, you don’t have a challenger in the election five days from today.

Johnson: Sure. Obviously, my focus is more on the Senate because that’s where I serve, and I’m the Majority Leader of the Senate, the Republican leader. But certainly, I’ve got great friends over in the House, and a few of them have asked me to help out in various respects, and happy to do that. We certainly want the House to come back and maintain its supermajority.

Leahy: And what was the Senate composition then?

Johnson: Interestingly, when I came in in January of 207 and 33 members, we had 16 Republicans, 16 Democrats, and one Independent. And if you remember that very famous vote for lieutenant governor.

Leahy: Which is interesting. The other little interesting thing that we made a big deal about here – and I was so delighted with the way it finally came out – Tennessee is the only state in the Union where the attorney general is selected by the state supreme court.

And we were highly critical of the problem with the separation of powers, et cetera, associated with that. And we reported on some of the candidates and pointed out some flaws in one of the candidates, who was considering it. And we encouraged the state supreme court to be transparent, and they were.

And I have to tell you, they have selected a conservative superstar as our attorney general, Jonathan Skrmetti. He’s leading the way already. He’s only been in office for two months. He’s probably the most effective attorney general in that two-month period of any in the United States. Who woulda thunk it?

Johnson: I’ve known Jonathan for a while and I worked with him when he was in the governor’s office. And I had high hopes and high expectations if in fact he became attorney general, and he ultimately did. And that’s who the supreme court selected.

And I’m like you, I could not be happier. And already working with his office, it’s been a real pleasure. We’ve had some interactions on some different things and legislation we’re working on, and he’s going to do a great job.

Leahy: And so it’s interesting how I had one set of expectations about it because of the peculiarity of the Tennessee State Constitution. In this instance, the outcome has been fabulous.

Johnson: And let me be clear, I have supported some of those efforts. My good friend Senator Ken Yager, who is chairman of the Republican Caucus, had legislation to provide for a confirmation process by the general assembly.

I still support that and I think those conversations will continue. But given the process we have, I think we’ve landed with a really exceptional attorney general.

Leahy: For the next eight years, if all goes well. I think in terms of the constitutional separation of powers, checks and balances, I think adding to the Tennessee State Constitution, an amendment that would allow the Tennessee General Assembly to confirm the appointment of the state supreme court, would be the perfect solution, in my view.

Johnson: Just as we do with the appellate court judges.

Johnson: We put that into place. Justices on the supreme court and then appellate court judges are appointed by the governor. But we put in a confirmation process.

Johnson: It gives the voters more direct accountability through the general assembly to be involved in that process.

Leahy: James Madison would approve of that. I believe. (Johnson chuckles)

Leahy: The father of the Constitution and who believes in the concept of checks and balances and separation of powers.

Leahy: So let’s talk about your travels around the state. Where have you been recently and are people saying different things in different parts of the state?

Johnson: When you look at the electorate and what they’re passionate about – and like you said, the mood of voters across the state – I think clearly the focus is on Washington. When you’re voting, if you haven’t yet, and you go to vote, you will be voting for the governor and your state Senate if your state senate seat is up in this cycle or in the state representative.

But you’ll also be voting for a member of Congress, because all nine of our congressional seats are up this time. So you’re voting for federal offices as well as state offices. And what I’ve seen across the state – and I’ve been to East Tennessee, I was in Dayton, Tennessee supporting Adam Lowe, who is a fabulous candidate for Senate to replace Senator Mike Bell.

I’ve been in Germantown supporting Brent Taylor, who is a candidate to take the seat previously held by Senator Brian Kelsey. I was in Rutherford County last week for Don White. I’ve been traveling the state a lot.

I see people very, very passionate about what’s happening in Washington, what you and Clint were talking about in terms of the dissatisfaction and consternation, if you will, about the Biden administration and Democratic control of Congress.

So I see that big red wave, a red tsunami happening in Tennessee as well. I see people are largely very happy with the state of Tennessee and where we are as a state. Certainly from a fiscal situation, people are passionate about certain issues at the state level.

You are right. But what’s driving the mood and driving the passions of voters has a lot to do with what’s on the ballot in any given area of the state.

Leahy: Are you seeing, when you go out of the state and you talk to people, a bunch of newcomers engaged politically, like people from California or Texas?

It’s mostly California, Illinois, New York, and Connecticut. Are you seeing a lot of folks that are refugees from those blue states, and what do they say when you talk to them?

Johnson: Yes, we are. And there have been a lot of conversations in recent years about, oh, gosh, all these people moving here from California, are they going to turn us purple or start to threaten our very conservative red status as a state?

And actually, I see it as the opposite. I see that these people have left California or New York and they’re battle-hardened. Someone said that they may have PTSD because they’ve been fighting for conservative values in some of these states, and they’ve been beaten so many times, year after year after year.

Leahy: I would say, yes.