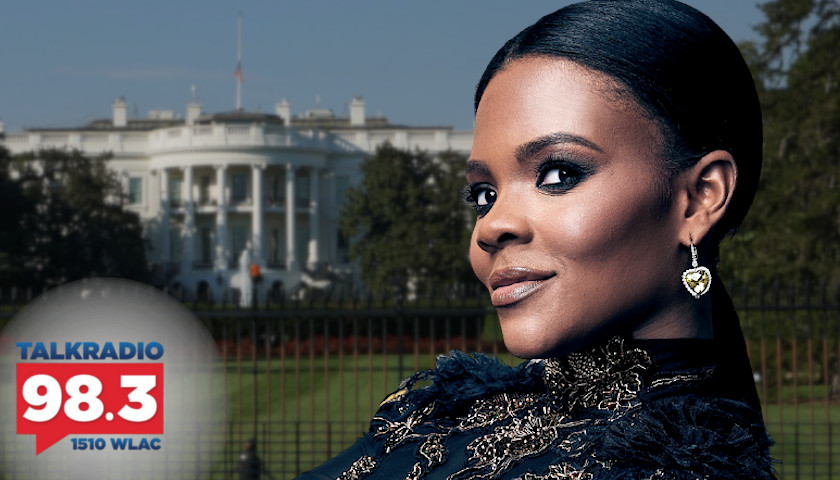 Live from Music Row Friday morning on The Tennessee Star Report with Michael Patrick Leahy – broadcast on Nashville’s Talk Radio 98.3 and 1510 WLAC weekdays from 5:00 a.m. to 8:00 a.m. –  host Leahy welcomed the host of the new evening talk show “Candace,” Candace Owens to the newsmakers line to talk about her tweets on the elder abuse of Joe Biden, the trial of Derek Chauvin, and Meghan Markle’s cries for attention.

Leahy: On our newsmaker line Candace Owens. Candace, on Wednesday you tweeted, the president of the United States is in severe cognitive decline and the entire world knows it. He gave an orchestrated kind of bizarre speech last night. What was your reaction to that speech?

Owens: I didn’t watch even a second of it because I’m not into elder abuse.

Leahy: That’s a good line. Your show is really going to be funny Candace. That’s a funny line. (Laughs)

Owens: I do not. We have a senile person that’s been installed in the Oval Office who was not given a press conference and over 50 days. Everybody in the entire world knows that Joe Biden is in cognitive decline. Everyone has known this since the second he announced that he was running for president of the United States. And the left stream media has done everything they can to protect him and to hide him and it’s foolish.

It makes America look weak. and I will not be adding myself to the group of people who are going to pretend that this man is leading our country. He’s not. He is a puppet. His strings are being pulled. I’m interested to see how long they are going to go without making him answer any questions from the press.

Leahy: What’re your guess of if he will ever hold a real press conference?

Owens: I think the answer is no, you know, I think they used covid-19 as an excuse when he was running obviously when he was nobody was showing up to hear him speak and he just had a couple of cars honking at him in hidden locations. And they don’t have an excuse now. So I think that they just keep you know doing what they’re doing and pretending that it’s completely normal that he’s not speaking in front of the press or taking any questions.

It’s a terrifying state to be. It’s like is this even a real country? There was not a single person and not even the people that are pretending that they don’t realize it that go to bed and think this is a man that is a strong leader of this country. It’s actually quite sad and it’s quite serious and it’s bizarre would be probably the correct adjectives.

Leahy: Yeah. I think you’re absolutely right about that. Other news of note. You’re just so non-controversial Candace. (Owens chuckles) You had another tweet yesterday about the trial of police officer Derek Chauvin in Minneapolis. Will he get a fair trial?

Owens: If he doesn’t get a fair trial then I think the implications are scary for the future. And I want to be clear here because people misunderstand I don’t think there’s a single person in America who thinks that Derek Chauvin is guiltless. Like we all think that Derek Chauvin did not act the correct way that day irrespective of the situation.

There’s just no reason when somebody stops moving to remain on their neck for that long. But what we’re talking about specifically are the charges that have been trumped up against to appease the public. This is not a third-degree murder charge. It should never have happened a third-degree murder charge. They can’t prove it was their degree of murder.

The autopsy shows the longer form of people who have not snippy should go out and look for it to be longer form tape of exactly what happened that day. You know, George Floyd was saying he couldn’t breathe long before he got onto the ground. It was clear to me having watched it that he was having a drug overdose. And that it’s highly likely given the results that came back in his autopsy report that he put drugs in his mouth to get rid of it when the cops were approaching the vehicle. And he had an overdose.

So Derek Chauvin did not cause George Floyd’s death. Unfortunately, the public is being deceived largely by the emotionality surrounding this case. And if he doesn’t get charged with third-degree murder, which is likely he won’t, based on evidence and we’re going to see riots as we’ve never seen before because people don’t understand that he should have never been charged for third-degree murder. So it’s unfortunate. And it’s almost like a catch-22. I don’t see how it’s good either way.

Leahy: Last question for you. A former Nashville resident Oprah Winfrey had a special interview with Prince Harry and Meghan Markle where they made a lot of allegations. My first question, will you invite Meghan Markle to be a guest on your new show, Candace?

Owens: As much as I think she’d love that because she’s obsessed with getting attention and pretending that she wants privacy, she will not be receiving an invite to my show because I am not looking to highlight a couple that has the audacity to accuse an entire country or to try to import America’s obsession with race overseas to England.

It’s is just so patently wrong and has upset my family of course on a lot of levels because my husband is English. And I spent a lot of time in England and it’s just so not indicative of who they are. And it’s just such scapegoating. Such spinelessness. And to Oprah, I don’t think we should be calling this an interview. We should be calling this a PR stunt. She didn’t ask any hard-hitting questions. She didn’t ask them for any proof. She is friends with Meghan Markle.

So pretending this was a no-holds-barred interview is just foolish. Meghan and Harry had the questions long before they were ever asked about them. And they crafted this interview to help them launch their careers in America and a race-obsessed America because the United Kingdom wanted one nothing could do with the narcissist Hollywood-driven couple. But let me tell you how I really feel. (Laughs)

Leahy: I was so glad to see your comments about that because I’ve studied the difference between a constitutional monarchy and a constitutional republic. I have to say Queen Elizabeth II who’s been the queen since 1952 has been a tremendous Monarch in England, in the United Kingdom, and it seems to me that Prince Harry has got some unresolved issues.

Owens: That’s exactly right. And I think the worst part of the entire interview is when she says there were questions surrounding his skin color. She made that seemed like that was something harmful. It is completely harmless. I have a biracial child. If I told you how many times while I was pregnant we were saying, I wonder what color is skin color will be? I wonder how dark he’ll be?

Do you think he’ll be light? Do you think he’ll be dark? such a natural question for excited parents and family members that are trying to envision what your child is going to look like when they’re multicultural and multiracial. And she left it absent of context and just said there were questions surrounding his skin color.

I could just see right through her. Look Meghan Markle was a d-list actress. Nobody knew who she was. And today she remains a d-list actress that unfortunately, we all have to know who she is because she keeps inserting herself in this victim narrative that’s a never-ending series of victimhood.