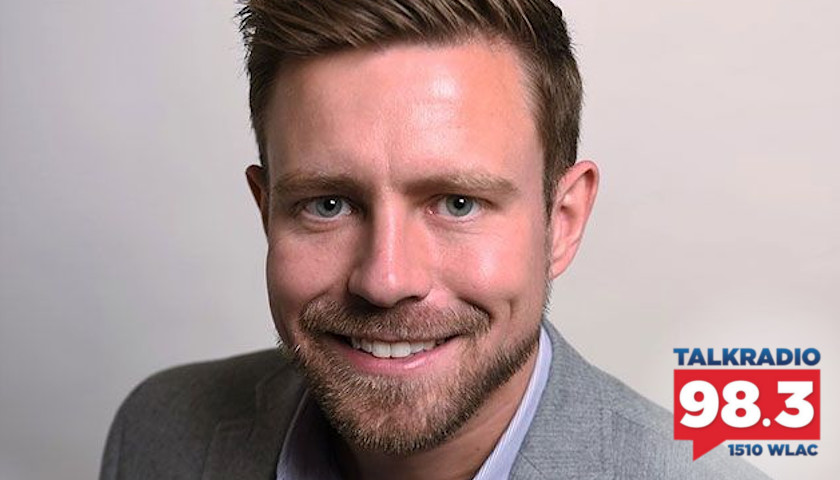 Live from Music Row Thursday morning on The Tennessee Star Report with Michael Patrick Leahy – broadcast on Nashville’s Talk Radio 98.3 and 1510 WLAC weekdays from 5:00 a.m. to 8:00 a.m. –  host Leahy welcomed conservative comedian and writer for the Ellen DeGeneres Show, Adam Yenser to the newsmakers line to discuss what it’s like be a conservative in Hollywood and how he got his start in the business.

Leahy: We are joined by the rarest of the rare conservative comedian funny guy Adam Yenser. Adam thanks for joining us.

Yenser: Hey, Michael. Thanks for having me. How’s it going?

Leahy: Well, you’re a conservative comedian and you’ve written for Ellen DeGeneres. Tell us about that. That’s a combo.

Yenser: (Chuckles) Yeah, openly conservative and making it in Hollywood. It’s tough. I’ve been at Ellen for 10 years now. I started in the industry working for Conan O’Brien and then started doing stand-up. And I’ve always been pretty openly right-leaning. I somehow managed to not get cancelled and still chugging along. I don’t know when it’ll happen. But it’s something you’ve got to be careful of.

Leahy: So you’ve been writing for the Ellen DeGeneres talk show for 10 years Adam Yenser. You’re on the credits. Now, there’s been a little bit of controversy about that show.

Yenser: Yeah, I can’t get into a whole lot of that. But I’ve had a good experience there. I’ve been there 10 years and those sort of rumors that came out those rumors have been around since before I started working there. So I kind of heard that it was a tough place to work. But I still went for it. I enjoy writing there. And as far as where the shows at now I still feel that I like working there. It seems like a lot of that stuff came up because Ellen did that monologue about being friends with George W. Bush and then it seemed like there were people who had sort of been aware of these rumors, but really kind of dug into them.

Leahy: That’s interesting. So I think you’re probably right. After hanging with George W. Bush all of those things came out. Tell us what your day is like writing for the Ellen DeGeneres Show. And then tell us how you go about and do your comedy gigs. I see you’re going to be performing this month in Colorado and Oklahoma and a couple of other places. And oh, by the way, when are you coming to Nashville?

Yenser: (Chuckles) I would love to come to Nashville. I was actually in Chattanooga two weeks ago and had a great time there.

Leahy: Did you have a gig there?

Yenser: Yes at The Comedy Catch in Chattanooga right next to the choo choo.

Yenser: It was great. I would love to come to Nashville and I hope I’ll make it there at the end of the year. I’m just sort of starting to get back on the road now because things are opening up elsewhere not here in California. Here still pretty like that. I think right now it’s legal here to eat outside as long as the waiter causes your food and then you pull down your mask and catch it in your mouth.

Leahy: Will Governor Gavin Newsom be recalled? what’s going on with that recall out there?

Yenser: It looks like the recall will be successful as far as getting it, you know to the ballot. I think it’s it’s an uphill battle I think to replace him with someone from the other side. But the recall effort seems to be gaining a lot of momentum because the people on both sides are annoyed with him right now because the people who are sort of against the lockdowns have been opposed to him for a year now. And the people on the left who support the lockdowns have now seen him as a hypocrite because he’s not even following his own orders.

Yenser: Our typical day is we get our assignments a week before whether writing monologues or comedy segment. And then in the morning, we have a meeting with the producers and with Ellen which is all taking place over resume right now. and then we get notes from them. We revise our scripts. We have a rehearsal in the afternoon and then we have like an hour or so to make changes.

Sometimes after rehearsal, everything goes smoothly and we go right into the show that script, and then sometimes every now and then everything gets reworked, and were scrambling to come up with new material in an hour. But we always get it together in time for the show. and then usually tapes in the afternoon and airs the next day. So we tape one day to air the next day.

Leahy: Where does the show tape? And is there a live studio audience?

Yenser: So we don’t have a lot of studio audience right now because it’s all over Zoom. For a while back in the fall, we were having a mix of a few socially distanced audio audience members and other people zooming in on TV screens. right now it’s all over Zoom and I think they’re kind of just following the guidance in the state right now as far as what we’re allowed to do with live audiences.

Leahy: Now, do you work like is your job like Monday to Friday doing that stuff and then you get on a plane and fly off to Chattanooga, and Colora Springs and Tulsa’s out what happens

Yenser: That’s exactly what happens. And it’s been it’s fun, but it’s been draining for a few weeks. I was flying to Chattanooga last weekend and working for Ellen all week. I had a few stand-up shows here at outdoor bars. last weekend I flew to Oregon. flew back on Monday morning from 7:00 a.m. to 9 a.m. And then at like 9:30, I’d be on a Zoom meeting writing for Ellen. So I’ve been working from morning to night and now It’s 5:30 here. So this is I think the earliest I’ve gotten up for anything in the whole pandemic right now.

Leahy: Well, we’re just delighted that you’ve got up so early for us. I’ve you are you have you had your coffee? Are you awake or are you having it right now?

Yensewr: I’m having it right now.

Leahy: So it’s rough getting up so early. It’s now 539 there out in LA do you live right on the ocean? Do you have your house right on the beach or are you like it somewhere in the San Fernando Valley with thousands of other people?

Yenser: I’m in the valley with a few other people. We tape at Warner Brothers. I don’t know if you are familiar with Burbank.

Leahy: Yes I am. And so so where are you from originally Adam?

Yenser: I grew up in Pennsylvania originally lived there most of my life up until College. then I lived in Brooklyn for three years. That’s where I started working for a Conan O’Brien out of college. and then I moved out to LA when Conan took over The Tonight Show. So I was there for all of the Conan why no drama and then I moved with Conan to the TBS at the Warner Brothers lot where he films his TBS show and that’s where the Ellen Show is also. And I heard about the writing job there and moved over to Ellen.

Leahy: Where are you from in Pennsylvania?

Leahy: Yeah, I know it well.  Right next to Easton.

Yenser: It’s where my family still is.

Leahy: So you grow up in Allentown. Did you tell your mom and dad I want to be a comedian?

Yenser: I did and they were very supportive of it. I hear some people that you know, there are parents kind of balk at that but they were they were supportive of from the start. They still come out to shows whenever I go back home, which is always interesting because I work, I describe myself as a mostly clean comedian. NOt squeaky clean.

Yenser: Exactly. But my family and my aunts and uncles will come out to see me and cousins and relatives and I’m like I’m clean but I don’t know what else I’m exposing you to with these other comics.

Leahy: So you are from Allentown. I’m going to guess, did you go to Penn State in Lehigh?

Yenser: I went to Penn State.

Leahy: I thought so. You are a Nittany Lion.

Yenser: Yeah, I went there. Most of the family went there and my mom worked there. Both my brothers went there.

Leahy: The big question. Have you ever seen a Nittany Lion?

Yenser: Just the sort of dilapidated stuffed one they have in the library.

Leahy: Are there really Nittany Lions? I guess it’s a mountain lion.

Yenser: Yes, they are mountain lions. There are rumors that they are still roaming around like Sasquatch.

Leahy: Well, it’s a great nickname and of course Lehigh Valley football is big time. So you get out of school. How did you get the gig with Conan?

Yenser: Actually while I was at Penn State, I got an internship at his show for so the first semester that I applied to internships in the city in New York. I knew I wanted to get into television writing. I applied to like my first choices like SNL and Daily Show and Conan and Letterman. And the only place that I heard back from was the Maury Povich Show.

So for one semester, I interned at the Maury Povich Show taking calls with a call from the people that wanted to like get tested to see who is their baby daddy was. So I did that for an entire summer at the Maury Povich Show. And then after I had that on my resume, I applied again the next semester and got the internship at Conan.

And I basically just interned at Conan for three semesters. There’s a point in my senior year in college where I was taking classes four days a week in central Pennsylvania, then driving back to Allentown Thursday night and taking a bus to New York on Friday morning to keep interning at Conan. Then I got hired there as the receptionist and intern for

Leahy: Adam, we’ve got to close out here. Try and get a gig here at Zanies Comedy Club.

Yenser: Yes. I love Zanies. I played the one in Chicago. I’ve got to come to Nashville. Thanks a lot, Michael.

Leahy: Adam Yenser. A conservative comedian from Hollywood. Thanks for joining us.