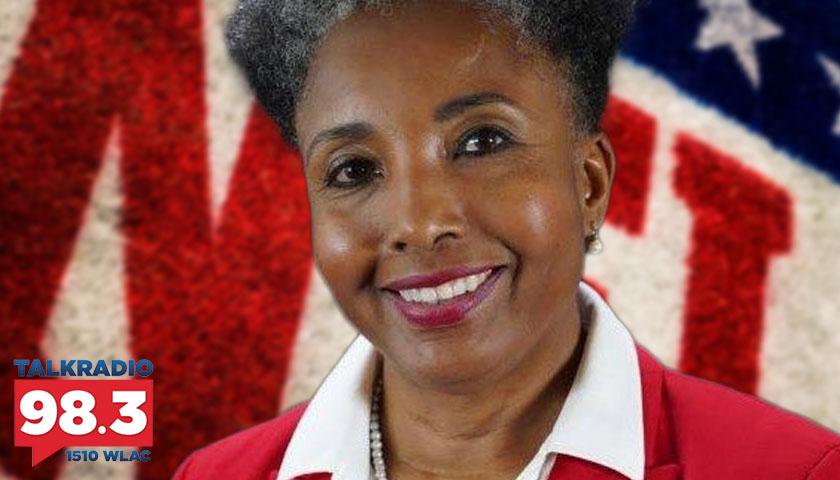 Live from Music Row Monday morning on The Tennessee Star Report with Michael Patrick Leahy – broadcast on Nashville’s Talk Radio 98.3 and 1510 WLAC weekdays from 5:00 a.m. to 8:00 a.m. –  host Leahy welcomed all-star panelist, Dr. Carol Swain, to the newsmakers line to weigh in on the NFL’s decision to play the Black national anthem, her new book, Facebook and advice for Metro Nashville Public Schools.

Swain: Good morning, Michael. It’s great to be back.

Leahy: It’s great to be with you. Look, you are busy, busy, busy. And every time I turn around, I think you are almost single-handedly trying to keep FOX on a conservative track.

I see you all the time on Fox and Friends, and you do a great job. At the latest, you were on Friday. You’re trying to give the NFL a dose of common sense. Tell us what you talked about.

Swain: They asked me about the NFL’s decision to play the Black national anthem, as well as to embrace some of the social justice measures being pushed by the left.

And I pointed out that, you know, football is America’s pastime. and the people who watch sports, they do that for relaxation and enjoyment with their family.

They don’t want to be bombarded with a lot of political leftist ideals. And we have one America. We already have a National anthem.

And it doesn’t matter whether the lyrics of the Black national anthem, whether they’re positive or not. What matters is that this is the business and it will put people in awkward situations.

Are they supposed to stand for the Black national anthem? If they don’t stand, are they showing disrespect? Will the players continue to disrespect our flag and things that are patriotic?

All of these things keep coming up. They shouldn’t be. And so I did criticize the NFL officials for capitulating on this very important national issue.

Leahy: You said something that is just basic, common sense and then I see it reverberating around the news ecosystem. I said Dr. Ben Carson had the same argument.

I think you made it first. You’re making a lot of arguments first. How are people responding to your common sense conservatism?

Swain: Michael, I’ve always made arguments first. When I was in graduate school, one of my professors challenge another one, took them before the administrators for stealing my ideas.

So I’ve always been ahead of my time. I’m just pleased that God has given me this opportunity to speak about these national issues.

Leahy: On the NFL, I was kind of hoping that they would kind of get away from left-wing social justice political messaging because I like football.

I like watching football. It’s a fun sport. We have Dr. K. on here every Friday at 7:30 to talk about football. But I’m afraid, Carol, that it’s just too bothersome to deal with all the political correctness in the NFL.

And as a sports fan, I guess I’ll be watching more college football. What are your sports watching preferences these days?

Swain: Well, first of all, I called for a boycott. People do understand dollars. And when you look at the various sports fields as well as the U.S. military, these are the areas where Blacks have excelled.

We’ve had a meritocracy. And the very idea that all we hear about is racism, racism, racism everywhere, for people like me, we have been blessed by being in this country.

And I think that it’s falling on deaf ears because people are so tired of it. And I’m not just talking about White people. I’m saying everyone is tired of it.

We want to go about daily life without being bombarded by all of this leftist ideology. And it’s about taking down America. It’s not about improving our country.

It’s about dividing us as a nation and taking us down and making us weak before foreign enemies.

Leahy: Carol, our listeners are very interested in what you’re doing. Tell us what’s on your agenda of late because you’ve been very, very busy.

Every time I turn around, you’re on Fox and Friends or doing some national venue. What are your priorities now for the balance of this year?

Swain: You only catch me on Fox and Friends. I’m on Laura Ingram quite frequently. And I have two FOX shows I expect to be on today if not this week.

It’s my Fox and Friends. And I recorded three with Fox Nation. This week I’m headed to D.C. for some films on critical race theory. I’m going to be in a film.

I’m going to be interviewed for a podcast. And then later I’ll go to South Carolina for another filmmaker who is also challenging critical race theory.

And I have a new book coming out, Michael, on critical race theory. And it should be released in early August.

Leahy: What’s the name of the book? And who’s your publisher?

Swain: The name of the book is Black Eye for America: How Critical Race Theory is Burning Down the House. And the publisher is Be the People Books.

And it’s co-authored with a young man named Chris Shore, who is a graduate of Georgetown. And it is written for the public. It’s about 150 pages.

It’s something that people can get through and explains what critical race theory is, where it came from, why it is unamerican. It runs counter to our Constitution as well as civil rights laws. And it has two chapters on strategies of how to fight back against it.

Leahy: Now, where can people go to buy that book? Is there a particular website because we’ll link to it on The Tennessee Star. Where is the website for that book?

Swain: It’s going to be on Amazon and everywhere else. But it’s not going to be released and available purchase until around August one.

Leahy: Well, let’s see. We got about 13 days until August first. We will be featuring it at The Tennessee Star because we want people to see common sense from Carol Swain.

Swain: Well, thank you so much. Critical race theory is the civil rights issue of our day. And that is my message and we have to fight back against it, in the same way, we joined forces during the civil rights movement of the 1960s.

Leahy: But, Carol, if you went to a Metro Nashville Public School meeting, as the Moms for Liberty Group did last week, they would probably argue that, well, White people can’t be the subject of that kind of discrimination by definition.

What would be your response to those woke folks at Metro Nashville Public Schools?

Swain: You know, I heard that back when I was in graduate school that only Whites could be racist because only White people have power. I thought it was ridiculous then, and even more so today.

And so White people are protected by the Civil Rights Act of 1964 and its amendment as well as the equal protection clause of the Constitution.

And I think Metro Nashville is setting itself up for a lawsuit. So I would encourage the listeners out there if you’re on a job or you’re in an environment where they are discriminating against you and it’s hostile because of the color of your skin or because you are male in an environment where they’re doing critical feminist theory or critical queer theory and you’re being discriminated against because you’re heterosexual, collect information.

Swain: No. In fact, things begin to change that very day that the article was published. I can easily access my supporters now because they have a platform where people can sign up to become a supporter and not just the friend.

They had that page so that I could not access or communicate with my supporters privately. And everything seems to be open and flooring right now. I think it’s because of the Trump lawsuit.

Leahy: The next time they shadowban you, let us know and we’ll do another story and magically it will disappear. Right?

Leahy: Carol Swain, thanks for joining us. Come back in studio sometime, please.