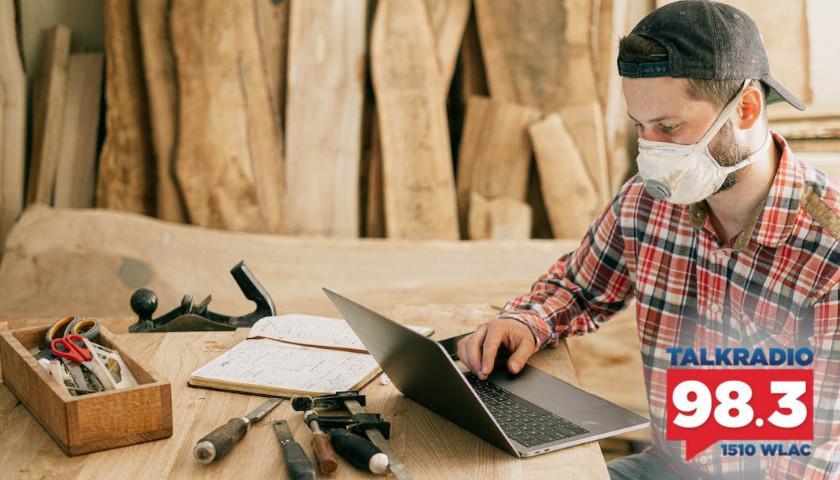 Leahy: Debbie Matthews is with us this morning.

Matthews: This is sort of like my home, because my husband and I had our music business right up here on Music Row.

Matthews: Yes, and it’s changed a lot, hasn’t it?

Leahy: It certainly has. And so you live in Columbia?

Matthews: I live in the historic downtown of Columbia. I own a historic home there.

Matthews: I think everybody in this country needs to be aware of what’s happening because where are our problems in this country? They’re in Democratic-run cities. How do Democrats keep getting elected?

And it’s because the municipalities do not have partisan races. Chicago does not. Memphis does not. Nashville does not. I was at WTN, our friends and competitors, and we were talking that Mayor Cooper was in there ahead of time when he was trying to run, and he said, I’m a conservative! I’m a conservative!

But you don’t find out till you get elected. But we have to change this. We have got to change to where it is a partisan race in all of our cities so people know.

Leahy: This particular race. You are running against the incumbent, who is, in essence, a progressive Democrat.

Matthews: Well, progressive socialist. Progressive Democrat. Yes. He’s young and it’s great, but hiding behind that Independent Party. I just want to be a mayor for everybody. It’s like, no, the first thing you did was raise our sales tax. That is not something for everyone.

Leahy: I didn’t know that. He raised your sales tax?

It’s the oldest elementary school in town. Everybody was, let’s save it. Well, so tax raised. The city gave 50 percent of what they raised to the schools. It did not save McDowell. It was still torn down.

The other 50 percent of the sales tax revenue is now banked in the coffers of the city. And I’m like, that’s not good governance. That’s theft. You just stole money that you said was going somewhere else.

Leahy: Okay, so I’m already suspicious if your name is Chaz. Not Charles, not Chucky. (Chuckles)

Matthews: I know. And then there was a gay event that was put on by a private thing, and okay. The problem for me, though, was there was a drag show that afternoon.

Leahy: Was he all in favor of that?

Matthews: Well, he attended at least the Gay Pride portion of the morning.

Matthews: This was July 2021. And Columbia, Tennessee was a little shocked that there was a drag show in our arts district.

Leahy: It’s all part of the plan to sexualize children.

Matthews: Exactly right. And so here you’re sitting here going, and I had someone from the community of the LBGTQ community call me. And I said, look, you know, I’m 57 years old.

When I grew up and lived in Nashville, these were sexualized events. They are still sexualized, and we can’t pretend that they’re not. And to mainstream them is, to me, child abuse.

Leahy: The incumbent Chaz Molder is an attorney. He’s a UT grad, graduate from the University of Memphis, and he serves as mayor.

Now describe the city governance there. I know in the county of Maury County, about 100,000 plus people growing. They have the new mayor, Sheila Butt, former state rep.

Leahy: And she’s been serving since September 1. So there’s a county commission and a mayor and they run the governance of Maury County. But within that, you have 40,000 people in the city of Columbia. In the county seat.

Describe the governance of the city, the mayor, the city council, and the city manager. How does that all work?

Matthews: The City of Columbia has a city manager-type system, so the city manager is paid to run the city. The city council consists of seven council members, five of which are ward city councilman.

Then you have a vice mayor and a mayor, and they’re the board of directors of the city of Columbia. And basically, we had a debate with Chaz Tuesday. He was like, oh, I’m just a good-feeling guy. And it’s like, no, the mayor sets the tone.

Leahy: So the mayor sets the tone for, in essence, the board of directors. Is it a paid position?

Matthews: But the most important thing is the mayor decides. I say they’re the neck that turns the city manager’s head on what we want to look like, you know?

And what’s unfortunate is during this time when I was on the city council, I started in 2008, we had the greatest recession since the Great Depression. The downtown was dead. There was nothing going on.

Leahy: I recall that time.

Leahy: Because I live just north of the Williamson County-Maury County line.

Matthews: So when I took my office here, unemployment hit, GM shuttered because Obama and Corker got into it. Downtown was completely dead. And we didn’t have a building permit pulled for like two and a half years. It was dire. But we were a conservative city council.

And then we said, we’ve got to still grow and make some long-term strategic decisions. So we did a strategic growth plan. We did subdivision regulations.

We invested in Ridley Riverfront Park, our arts district, and we made the historic downtown an economic engine. If you come here today, Columbia is flourishing, and it has been.

Leahy: And that downtown district has become very popular. And it’s a very nice part of town.

Matthews: It is. But that was from us setting and making smart, conservative decisions that were for investment. Maury County is the best place to be an entrepreneur and a small business owner, especially in the downtown district.

Leahy: I don’t disagree with you on that. But tell me why, if you’re an entrepreneur of all the places in the state – and I know several folks who have actually moved their businesses to Maury County – but tell me why that’s the case. Why is Maury County the place to start a business?

Matthews: It’s a conservative community that doesn’t want regulations, and we’re having trouble with that, which we’ve got to straighten out, which is one reason I want to run for mayor.

Leahy: Is there a movement under the current mayor, Chaz Molder, to do more in the way of regulating businesses in the city of Columbia? 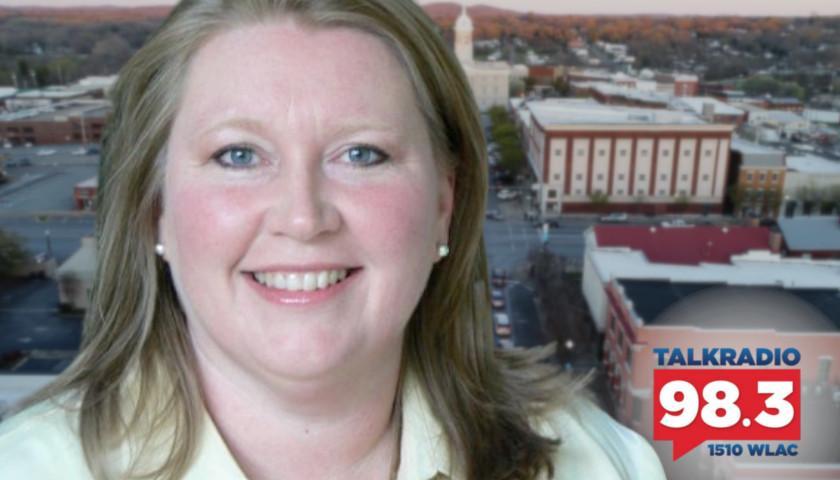 Leahy: In the studio, our guest, our good friend from Maury County, a candidate for mayor of the city of Columbia, Debbie Matthews. Good morning, Debbie.

Matthews: Good morning, everybody. So good to be here.

Leahy: We’re delighted to have you here. Well, the clock is ticking.

Leahy: So it is now three weeks and five days until Election Day.

Leahy: November 8th. And tell us a little bit about the race for mayor. You are one of two candidates.

Matthews: I’m one of two candidates. Columbia – I call it our little jewel box – it’s a 40,000-person town that is a very, very conservative city.

Leahy: Very conservative city. It’s the home, of course, of James Polk. James Polk, the 10th President of the United States of America.

Matthews: I think it is the 11th. But he said, I’m going to serve one term, I’m going to do everything I promise to do, and then I’m out. And that’s the greatest thing I think any politician can do, is don’t overstay your welcome. So we love James Polk. But Columbia, Tennessee, I do call it our little jewel box.

If you have not been to Columbia, you have to come. It is one of the most special places on earth. And we do currently have a mayor’s race going on. And, you know, like most municipalities, you know, there’s a charter that they have to be nonpartisan races.

Leahy: Yes, in the charter of the city. Now, that is a little bizarre …

Matthews: So in 2018, the Republicans – which I’m the chair of the Maury County Republican Party, now – but in 2018, as a member, we said we have to have some sort of touchstone that we know where people are sort of starting.

And so we said we’re making our county executive a partisan race, which is the county mayor, and we’re going to move to get our county commissioners, move them into partisan races. And we did that.

And then this last year, of course, we were like, we have got to have our school board members run partisan, because right now everything coming out of the school board situation, you have to be able to see who you’re dealing with and where their thoughts are. So we got that through.

Leahy: And that’s in for the county, for Maury County. But there are 12 members of the Maury County board.

Leahy: And by the way, just for our listeners, just a reminder, that the 2020 National Constitution Bee champion … [Jackson Carter] is now a member of the Maury County Board of Education. He’s a sophomore at the University of Alabama.

Matthews: He’s a freshman. And we wanted Jackson Carter. He’s just the most terrific kid who is the president of our Young Republicans, and he’s doing a fantastic job. But, you know, we looked at our state reps, and our meetings, and we said, this year we want our partisan school board races to take it to the legislature and get this done.

That started in Maury County. We have to have partisan school board races because all the craziness that everyone’s trying to push. We know that liberals, or progressive socialists, whatever you want to call them, basically had a full-court press.

They said we’re going to take everything over at local levels. We are seeping into every area. And, you know, Republicans were asleep on that, just thinking …

Leahy: Well, that’s happened around the country. Thank you, George Soros, for that. That is happening in Maury County and the city of Columbia.

Matthews: Everywhere. And so you go, why is this person running for DA?

Leahy: And that is a daunting thought.