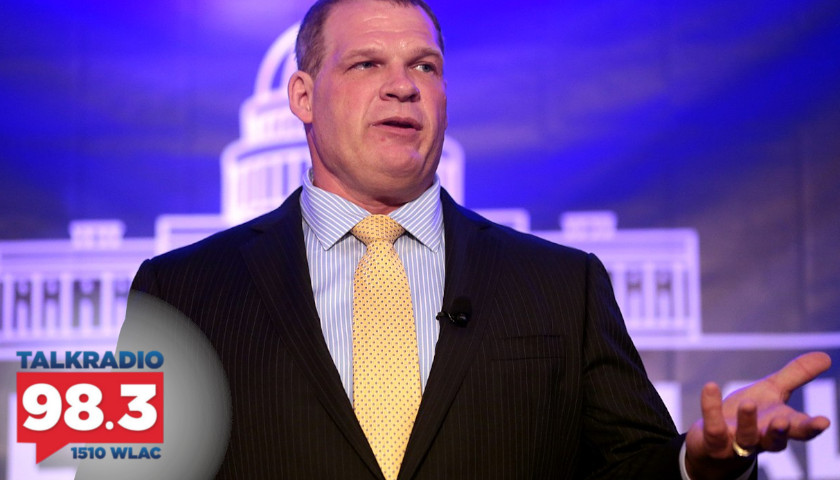 Jacobs: Good morning Michael. How are you, sir?

Leahy: I am great. So you got a fun festival going on in Knox County? I love to have a fun story. Tell us, is this the first annual fall festival, or have you been doing this for a while?

Jacobs: This is the first annual fall festival. It’s going to be October 26 this coming Tuesday at Oaks Farm in Corrington, Tennessee. It’s a beautiful place. There are all sorts of stuff, games, and fun activities for kids of all ages.

And, of course, a pumpkin patch, a corn maze. And we’ll even have live music by Gone Country, which is one of America’s top country cover bands. So we’re really looking forward to it and it’s going to be a lot of fun.

Leahy: That’s great. Now, who’s putting it on? And why do they decide to do this fall?

Jacobs: This is with my campaign. We are putting it on, and we just want to have a good time and get people out. And fall is my favorite season.

The temperatures are dropping. Football is in full swing. I love autumn. We thought what better time than to get folks out to Oakes Farm and just have a good time that evening.

Leahy: It’s interesting you say that fall is your favorite season. You’re a little bit younger than I am. But I remember I had the same exact feeling because as a kid playing in a little small high school in upstate New York, I had visions of NFL glory.

Didn’t make it past freshman football in college. But I always dreamed of being the star on the football field. Fall would come around, football practice would start. I was ready. It was just so much fun. And I sense that a lot of us sort of have that feeling about fall.

Jacobs: Absolutely. Of course, I played football and before that basketball. And basketball you’re ramping up during the fall. So this is a great time of year.

And of course, the harvest is done. And back in the day, there’s big celebrations about that. And to kind of carry it on now, I think it’s wonderful.

Leahy: Now, if I go up there on Tuesday…

Jacobs: You’re going to have a good time if you go up there. Yeah, but I am tempted. I would like to. Tell you what, if it were on a weekend, I would definitely go up. But am I going to have to wear a mask? (Chuckles)

Jacobs: Only a Halloween mask.

Leahy: (Chuckles) That is a lot of fun. In addition to having fun, there are other things going on in Knox County. What are the major issues that you’re facing right now as Mayor of Knox County?

Jacobs: Well, just like everyone else we’re dealing with all the code stuff and the tension between local governments and control at a local level and the edicts coming down from the federal government, of course.

Not only have I spoken out against President Biden’s vaccine mandate, which is having an impact on workers here. We already have folks that are being threatened to be fired, have already been let go and all those sort of things because they feel it’s their choice.

Leahy: Yeah, folks that have been let go from corporations there over their vaccine mandate policies.

Jacobs: Yes. And also being threatened to be let go. At Oak Ridge, which is very close to Knox County, we have the big DOE complex with the Oakes National Lab and some other Department of Energy facilities and the employees there, as well as the federal contractors, this impacts them. We can’t do anything about that.

Leahy: Federal workers are currently under this vaccine mandate, I guess. Is that right?

Jacobs: Right. Yes. And it’s coming down onto the contractors as well.

Leahy: So that’s already having an impact there.

Jacobs: It is. We already have people that have been placed on unpaid leave. There’s a class-action lawsuit going on. People are fighting back against it. But we have that.

We also had a federal judge impose a universal mask mandate on Knox County schools, despite the fact that schools have twice voted down on mask mandates. And there is no end in sight. He did not say the metrics or the numbers under which that mandate would end.

Leahy: Can I just ask you about that one? The status of that?

Leahy: This is the lawsuit, the same kind of argument that was brought in two other counties. It was brought in federal district court in Shelby County, in Williamson County, and in Knox County. It turns out the plaintiffs were local parents with kids with some disabilities of some sort.

And the argument was made that not requiring every student to have a mask on violated the Americans with Disability Act. I’ve never figured that out yet. But did you see the group that was representing them? The lawyers you saw the connection there.

Jacobs: Yes. I actually asked some folks to look into this case as far as who is really behind it. And it turns out, as you said, the plaintiffs are local folks. But some of the lawyers in the case, as well as the organization supporting the case, is a group called Democracy Forward.

And they are a Hillary Clinton-backed group. John Podesta is on their board. Of course, John Podesta was Bill Clinton’s chief of staff, and he was Hillary’s 2016 presidential campaign chair.

Mark Elias, who was 2016 general counsel to the Hillary Clinton campaign. So literally, Hillary Clinton’s people are in Knox County influencing policy.

Leahy: This is basically political colonization through litigation. That’s what it looks like to me.

Jacobs: Well, it absolutely is. And I got to hand it to them, they’re really smart strategically because the left has realized that the way you subvert America is through local government.

Not only are they working at the federal level. But they’re also working diligently at the local level. And that should be a click on for all of us should be going off in heads.

Leahy: That is a very important point, Mayor Glenn Jacobs, that you just made and you’ve seen it for decades. With George Soros funding prosecutors and other local elected officials that aren’t enforcing the law. Will you come back and give us a report after the fun of your big fall festival up there on Tuesday?

Jacobs: Sure. Michael, it is going to be a lot of fun that begins on Tuesday, October 26th at Oakes Farm and that’s in Corrington, Tennessee. If it were a little closer, I would be there. But I’m going to come up there and let’s have lunch sometime and we’ll do an exclusive interview with you. That would be great! Maybe one of these years when we do the fall festival, you can do a remote from there.

Leahy: We’ll shoot for that next year. Glenn Jacobs, mayor of Knox County. Thanks so much for joining us. What a great interesting guy to talk to.