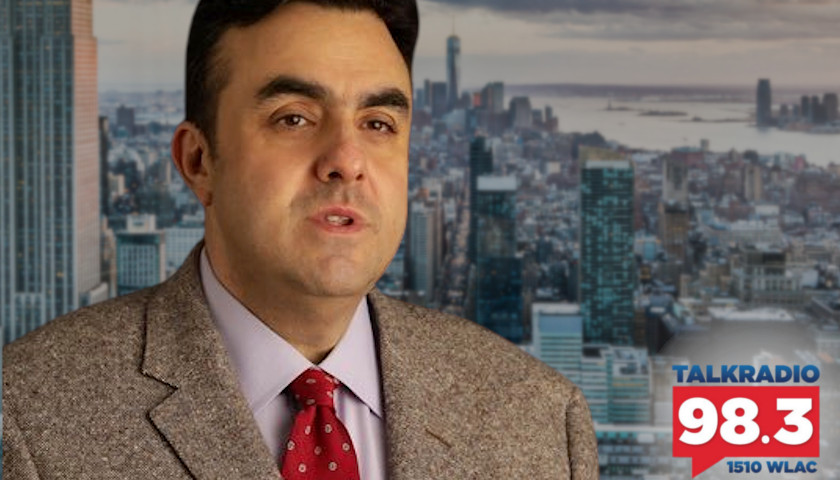 Live from Music Row Wednesday morning on The Tennessee Star Report with Michael Patrick Leahy – broadcast on Nashville’s Talk Radio 98.3 and 1510 WLAC weekdays from 5:00 a.m. to 8:00 a.m. – host Leahy welcomed City Journal associate editor and author of his new book, The Last Days of New York to the newsmakers line to describe the escalating crime in New York and who’s running for mayor.

Leahy: We are joined on our newsmaker line by Seth Barron, a New York City-based reporter and editor who’s been the associate editor of City Journal for some time. He is the author of a great new book.

You gotta read this. Last Days of New York. Welcome, Seth. I’ve been looking forward to talking to you for some time.

Barron: Thanks, Michael. I’m glad to be here.

Leahy: So New York City went through a rejuvenation when Rudy Giuliani became mayor. They had the famous broken windows policy where they cleaned up all the little small crimes in New York City and made it safer. Then-Mayor Bill De Blasio happening all of a sudden overnight, it’s a war zone. I guess your book tells that tale.

Barron: That’s right. And it wasn’t just De Blasio, although he was instrumental. But he had a whole team of friends and allies, progressives in the City Council, state legislature, up and down the government helping.

And, yes, they decriminalized quality of life crimes, public urination, littering, the instituted bail reform. We have a bunch of DAs who just released or who just dropped charges on all the rioters and looters from last summer. So all of this combined has turned things around in a bad way.

Leahy: Is poverty the root of crime?

Barron: Well, this is what you hear a lot. Like AOC said, that when people are shooting someone on the street in broad daylight while he’s walking with his kid, that this is because they need money to pay the rent.

But no, I wouldn’t say poverty is not the root of crime because there’s a lot of poor people. Most of them don’t shoot each other. And these shootings all have to do with disputes, beefs or they’re just gang-related.

They’re not economic. It’s just people who are encroaching on each other’s turf or insulting each other. Or someone doesn’t like the way someone looked at him on the subway. So he slashes his face. That’s the sort of thing that’s driving it, not poverty.

Leahy: So yesterday there was a primary election in New York City for the new mayor on the Republican primary, which doesn’t really matter. But the winner was Curtis Lee. On the Democratic primary, a former New York police captain Eric Adams got 31 percent of the vote. Alexandra Ocasio-Cortez endorsed, what’s her name? Maya Wiley got 22.

Leahy: Andrew Yang was in fourth place with 11%. So he’s conceded he’s not going to be mayor. Now, they’ve got this ranked-choice voting thing, which I really don’t understand. So it’s going to be a while before they determine who the winner of that is.

I guess it’s down to Eric Adams, the former police captain, and this Maya Wiley. Between the two of them, who is worse?

Barron: Well, Maya Wiley would be a disaster. There’s actually another candidate, Catherine Garcia, in there, too. Maya Wiley is the George Soros candidate, she’s in favor of defunding the police. She would just be an absolute disaster.

The worst possible candidate. Eric Adams, he’s a former police captain, as you said, and he’s made some of the right noises about law and order. But the problem in New York is that, like, chaos has been codified.

All of this stuff has been institutionalized. They’ve changed the laws, and there’s a whole like I said, the DAs are in there. They have bail reform. The NYPD is under a federal monitor. They got rid of qualified immunity for the police which makes them much less interested in doing or willing to do their jobs proactively.

Criminal discovery reform has terrified witnesses from coming forward. There are just all these reasons why even a strong law and order mayor wouldn’t be able to turn things around. And Eric Adams, he’s okay, but he’s no Rudy Giuliani.

Leahy: One of my favorite television programs of all time was Law and Order. 20-year run, I think it ended up about 15 years ago, but it was a great program. It was about the police officers and the DAs in Manhattan. If they had to redo that program, wouldn’t they call it Law and Disorder?

Barron: That’s sort of the way things are headed in New York. I’m not going to say that everywhere you go there are bullets flying by. But here’s the thing. We’re heading starkly in the wrong direction.

New York has never seen a rise in crime as sharp it is experiencing. Now deterioration and public disorder on the street is increasing and the city is dirtier, dingier, and somewhat scarier than it was just two years ago. I think that that would be apropos name.

Leahy: Paint two different scenarios for New York City in 2021 and beyond. Mayor Eric Adams, Mayor Maya Wiley. What are those scenarios look like over the next couple of years?

Barron: Unfortunately, I’m not so sure it would be that different. Maya Wiley would come in and she wants to defund the police and put more money into the community. She says we’ll have violence interrupters.

Leahy: (Chuckles) Violence interrupters? What on Earth is that?

Barron: Well, this is a big program. This is Bill DeBlasio’s main program.

Leahy: I mean, there really is a program called violence interrupters.

Barron: You send people out. Like former gang members or trusted community leaders, and they go out and try to talk to gang members before they start shooting each other.

Barron: It has no success.

Leahy: It sounds to me it’s like, are you going to be a violence interrupter. Sounds like they’re asking you to be the person who throws your body in front of the bullet headed for somebody else?

Barron: It does sound like that. And unfortunately, that’s what it winds up being. And even Eric Adams, who should know better, last year, when people lighting illegal fireworks, suggested that people not call 911 if they’re bothered by fireworks, but go out and try to talk to the people, setting them off and see what they’re up to.

Barron: A woman got shot and killed doing exactly that. Here’s the thing. The police are professionals, so it’s an impersonal relation for them. They’re not angry about whatever the dispute is that people are trying to settle.

So they’re not personally invested. And so they know how to de-escalate it. Whereas if people are settling their own problems, it can get worse.

Leahy: Seth Barron, author of Last Days of New York. Last question for you, Seth. When are you moving to Tennessee?

Barron: Well, I’ve got one of my colleagues moved down there, and he loves it. I’ve got a good friend from there. I was very fond of Chattanooga when I visited, and I like Tennessee a lot, so I may be coming down.

Leahy: Call me. We’ll give you a tour. We’d love to have you. (Barron chuckles) Seth Barron, thanks for joining us today.

Leahy: All right. Seth Barron, author of The Last Days of New York.