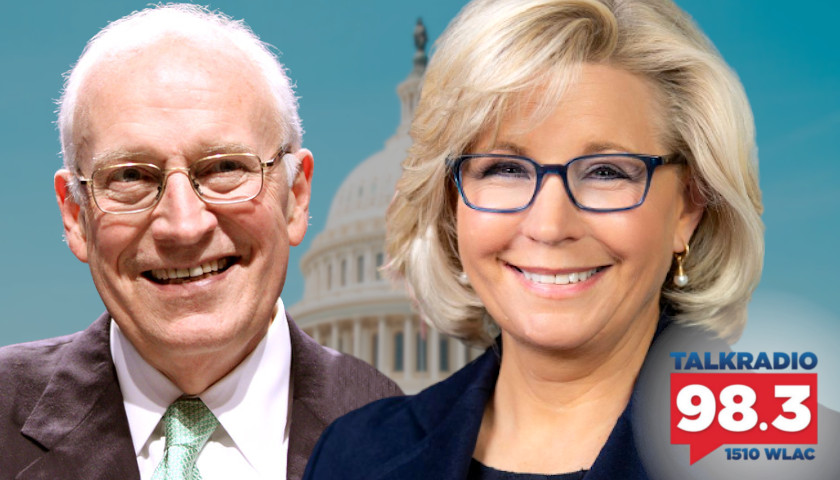 Leahy: That’s Jim Jordan and Jim is at the center of this kind of controversy. I mean, it’s all to be expected. The regime of Nancy Pelosi, speaker of the House, wants to do an investigation or cover-up, shall we say, with what happened on January six.

Lots of questions here. Tucker Carlson last night talked about it. Roger, what’s your take on this? Queen Nancy, the Despot, who is the speaker of the House, basically elected Jim Jordan of Ohio and Jim Banks of Indiana as members of this, the word really is going to be a Kafkaesque propaganda event.

Simon: Straight out of an Alice in Wonderland kind of thing with Liz Cheney as the titular Republican.

Leahy: Liz Cheney. I saw a clip of her talking on Tucker Carlson’s show last night. I couldn’t believe that this was a Republican.

She said, well, I’m totally supportive of Speaker Pelosi. The minority leader is just totally wrong at the head of her party, by the way.

And, you know, these guys are, well, you can’t have somebody who’s a potential witness be on and so I agree with the Speaker. What is going on with Liz Cheney?

Simon: All right. I see Liz Cheney in a slightly different manner than everybody else. Let’s say, a different angle. And it’s purely psychological.

And what we are looking at with Liz Cheney is what old Sigmund Freud used to call a very severe Electra complex.

Leahy: Okay, now elaborate for those who are psychiatrists.

Simon: Right. An Electra complex is sort of the polar opposite of the Oedipus complex. And it’s a young woman who is not so young anymore. Let’s say a middle-aged woman who has a thing for her Dad.

Leahy: She’s trying to Curry favor with her dad. That’s a polite way to put it.

Simon: It’s kind of a love affair with the father anyway, and not consummated, of course, I’m talking about psychologically. And as we know, I interviewed both. I interviewed Dick Cheney.

Leahy: Oh. When did you interview Dick Cheney?

Simon: I interviewed Dick Cheney just after, I guess, after Obama first came in.

Leahy: Where was this interview?

Simon: It was at the Reagan Library.

Simon: Yes. It was a very fancy interview physically because you set up a camera above the Air Force One that they have in the regular library.

So you’re looking down at Air Force. And I’m sort of at that point in awe of Dick Cheney because I agreed, sadly and incorrectly, with some of his policies.

Simon: He’s a bright man, though. There’s no question about it. And in with Dick walked Liz because they were always inseparable.

And, in fact, I hadn’t known that Liz would come there. But I became friendly and talked with her and all. And it was very clear that she was the sidekick to her father and his policy.

And, of course, his most famous policy was the Iraq War. Which many of us favored in those days. I don’t know where you were on it.

I was for it. And I was wrong. And Dick Cheney in a more important manner. But now roll forward many years.

Leahy: Let me just go back to that interview. What was it like interviewing Dick Cheney?

Simon: It was not a good interview on my end. Dick Cheney was fine. My interview didn’t probe very much because I wanted to interview the vice president and that’s a very big deal.

Leahy: It is a big deal. And perceptions of Dick Cheney – of Cheney dramatically…

Leahy: Since he left office, his star has not declined quite as much as George W. Bush’s because he himself has been silent about a lot of things.

Leahy: George W. Bush has just jabbered on like an idiot on immigration.

Simon: Well, it was always said that Dick Cheney was the brains of that administration. And it’s probably true.

Leahy: You look at George W. Bush talking today and you say, how did we elect that guy president? Not the brightest bulb.

Simon: Not the brightest bulb. But Cheney was a smart guy. He just made a very bad decision, which happens. And in any case, it was something that everybody learned.

We all thought maybe that if you win a war in Iraq, they’ll turn it to Denmark. But somehow it didn’t.

Simon: To say the least. Anyways, what Liz Cheney is trying to do at all costs is to preserve the reputation of her dad. And that’s what we’re watching, and it’s destroying everything. I mean, she’s nuts. (Chuckles)

Leahy: She really is. And it’s a sad thing to watch. And thankfully, she’s gonna be gone. And once she loses her position in Congress, no one’s gonna pay attention to her.

Leahy: I got one person who might pay attention to her. You ready?

Simon: Go for it.

Leahy: Jeff Bezos, because, you know, he gave $100 million to Van Jones to do civility. Van Jones. Mr. I-love-Critical-Race-Theory Van Jones. That guy.

Simon: Jeff Bezos can afford to do anything he wants, but I don’t think Liz Cheney is good enough on TV and radio to preserve, frankly.

Leahy: (Laughter) So now let me explore your theory a little bit more. She’s there. How is she preserving her father’s legacy by siding with Nancy Pelosi and against the leader of the Republicans in the House? Explain that?

Simon: Okay, here it is. Donald Trump trashed her father and trashed the Iraq war all the time. The enemy of my enemy is my enemy.

The Republican Party is now Trump. Let’s be real. And she hates him. He trashed her father. I’m talking really primitive stuff.

Leahy: That’s an explanation that makes sense. I think from what I’ve read, that her father does despise Donald Trump.

Simon: Oh, I’m sure he would. And now he doesn’t have to say it publicly because he’s got his daughter doing it for him.

Leahy: And it’s not serving her well.

Leahy: And it’s not serving her father.

Simon: When I interviewed him, the most interesting part of the interview was when he was showing all his heart maintenance things. He’s had several operations, and he opened them up for us on camera.

Simon: Yeah, it was interesting. That part was actually medically interesting. He was treated with the most modern equipment.

Leahy: So he’s not in sufficient robust health to go out and be very active. He’s in maintenance mode.

Simon: This is some time ago, that interview. I mean, he’s done very well physically, actually.