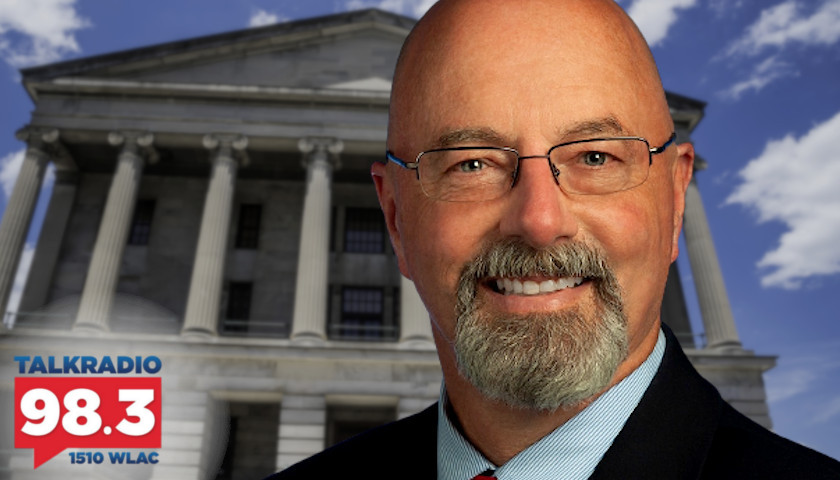 Live from Music Row Tuesday morning on The Tennessee Star Report with Michael Patrick Leahy – broadcast on Nashville’s Talk Radio 98.3 and 1510 WLAC weekdays from 5:00 a.m. to 8:00 a.m. –  host Leahy welcomed Tennessee State Senator Mike Bell to the studio who discussed the status of a Big Tech pushback bill in the General Assembly and the bill he is carrying that would create three statewide Chancery courts.

Leahy: We are in studio with our good friend State Senator Mike Bell represents within County and a few of the counties down that neck of the woods. Mike, you were telling me something during the break. That a guy that you’re working with a stonemason building your house listens to this program.

Bell: He listens every morning and  I want to give a shout-out to Ben Lances. My wife and I are building a home right now, and I did the stonework for us, and tile work does a great job and he listens to you. In fact, he’s probably the only one I know of there in my area because I’m three hours away who knows about your program and listens every morning. Hello, Ben. Good morning.

Leahy: Ben, thank you for listening. You obviously have good political judgment.

Bell: He does. He’s a hardcore conservative guy.

Leahy: Good. We broadcast over Talk Radio 98.3 and 1510 WLAC here and 1510 on the AM band big 500 watt Clear Channel station. And the FM station just covers mostly Middle Tennessee. You can listen to us on the iHeart app, which I think great. But if all goes well, sometimes this quarter we will be syndicated to radio stations around the state of Tennesse.

Leahy: So you can listen to us from all around the state. If all goes well. We are coming into the last few weeks of the session. And as the chairman of the Judiciary Committee, you are involved in a very important bill. We’ll talk about that in a second. Our listers are interested in what’s happening with the Big Tech pushback bill. Several other state legislatures have addressed that. Florida, I think, has passed a bill that involves some pushback against the Big Tech censors, Facebook, Google, et cetera. Now I understand that you are the one carrying that bill.

Bell: I am myself and Rep. Johnny Garret are carrying that.

Leahy: Johnny is the President of a Little League. I think it’s the Goodlettsville Little League. And he and I have been talking with the guys at Music City Baseball and went down and had lunch with them. And we have some ideas to help spread baseball around Tennessee because I’m a big baseball fan, too. So Johnny he’s in the House and you are in the Senate.

Bell: That’s right. And we modeled it after the Florida legislation. So we essentially copied the Florida legislation modified at Tennessee. But we did it kind of late in the session and trying to the issue with this is how do you figure out where the state authority starts and where the federal authority stops. Because most of these institutions that we want to push back against as you mentioned, Facebook, Google.

Bell: Twitter. Any of those are regulated at the federal level. And what can we do in Tennessee actually put teeth into law, not just pass something for show. We could have probably passed something for show. But we are going to actually put teeth into this law to push back against Big Tech censoring conservative views. This doesn’t go both ways. If you follow social media as I do, they’re not getting complaints from the liberal side.

Leahy: Because they are not censoring them.

Bell: That’s right. It’s coming from the conservative side.

Leahy: They are amplifying liberal messages.

Bell: That’s right. In that short time, we couldn’t figure out how to pass a bill that actually put teeth into a way to, I guess, punish Big Tech for censoring. So we laid it over. We’re going to look at it this summer. In fact, I expect both the Speaker of the House and Speaker of the Senate, to name study committees that will take a serious look at what we can do to push back against Big Tech. And I expect them to name those before the session ends.

Leahy: So that may happen. The bill could be recommended over the summer study period.

Leahy: Then possibly reintroduce it at the beginning of the next session of the Tennessee General Assembly in January of 2022.

Bell: That’s correct. That’s what the plans are.

Leahy: And you are also our chairman of the Judiciary Committee.

Bell: Yes. It is somewhat unusual being a non-attorney and being chairman of the Judiciary Committee.

Leahy: How did you become chairman?

Bell: Well, I’ve been on the committee and I’m in my 11th year. And, of course, the chairman of any committee is named by the Speaker and the Speaker asked me if I’d like to do it. I think he appreciates the fact that as a non-attorney, how do I put this, sometimes attorneys may be a little hesitant to take on the judiciary because they work in that sphere. They work where they could receive retribution.

Leahy: From a judge.

Bell: I’ve got no fear of that.

Leahy: So tell us about the bill that you’re carrying, and why you think it’s important and where it stands.

Leahy: Let’s just stop for a moment. How many Chancery courts are there in the state of Tennessee?

Bell: Oh, goodness. I think there are 31 judicial districts. And so there would be somewhere around that number of Chancery Courts.

Leahy: I can see where this is going. When the law was passed a long time ago, the politics in Nashville were probably not any different than the politics or the rest of the state.

Bell: Very, very similar. You got it. You know where this bill is going.

Leahy: So it didn’t make any difference 100 years ago where lawsuits against the state would be brought.

Leahy: Now, common sense, since the state capital is in Nashville, you would say it would be brought into Davidson County. Except, the state of Tennessee has changed quite a bit. There are 95 counties and 92 of them are rock-rib conservative.

Leahy: And two of them are far left. And Haywood County is kind of 50/50, 55/45 Democrat. Three counties, I think, went for Biden this time. And one was Shelby, which went overwhelmingly in the Memphis area. And then Davidson County went, and we’re about 65/35. But that’s it. So Davidson County is not at all representative of the state of Tennessee.

Bell: It doesn’t reflect the politics of the state of Tennessee at all. And that’s the reason for this bill. Why should a Chancery court that’s elected by the most liberal constituency in the state be deciding the cases? And I attacked when I presented this bill in committee, I attacked this argument head-on. I even mentioned Chief Justice John Roberts’s remark several months ago when he said there was any difference between an Obama judge, a Bush judge, a Clinton judge, or a Trump judge.

We all know that’s BS. That’s complete BS. (Leahy laughs) What’s the old line from Outlaw Josey Wales? Don’t pee on my leg and tell me it’s raining. Well, that’s what he was doing. And he was trying to tell us that there’s no difference between judges. Why is it a big deal every time we have a presidential election? Because we know who appoints that next Supreme Court judge and hopefully they’re going to reflect the philosophy of the party that elected the President.

And we know that at the national level. Don’t try to tell me that’s not going on here at the state level. I took it head-on that yes, I’m absolutely wanting to get cases out of a court that’s predominantly Democrat and follows a Democrat philosophy because that’s the type of people who are running for these positions. That’s the type of people who are electing these. And so why shouldn’t we…

Leahy: Far-left actually in my view.

Bell: And so what this bill does is create three statewide Chancery court positions that would be elected statewide.

Leahy: Three statewide. One for each division.

But we can’t do that because of the language in the Constitution. So they would run statewide but then this panel of judges would hear any constitutional challenges against the state. They would hear any appeals of administrative law. But everything now that’s going to Davidson County Chancery Court would go to these three.

Leahy: Chancellor Lyle. She has been very prominent in many decisions, few of which I agree with. (Chuckles)

Bell: Yeah, I would agree with that. But it’s modeled after our bill that passed goodness when I was still in the House 11 or 12 years ago, that allowed administrative law cases to get out of Davidson County Court and be heard in the county from where the defendant lived. And so we’re trying to move these cases out of liberal Davidson County.