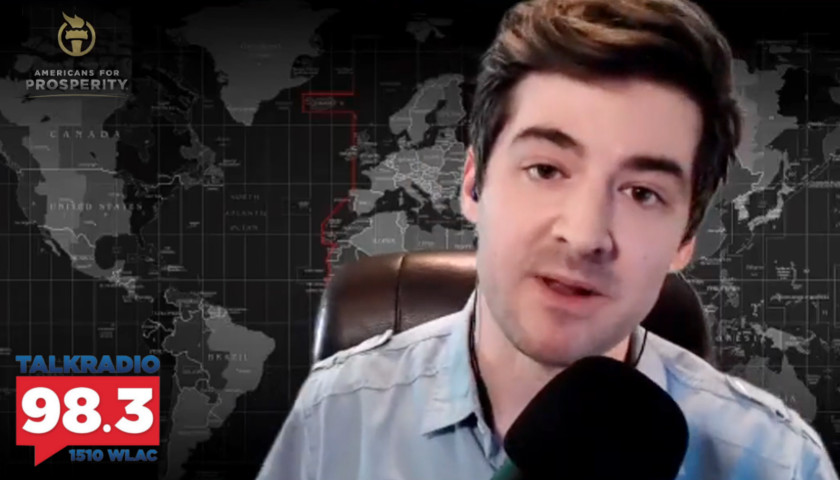 Live from Music Row Monday morning on The Tennessee Star Report with Michael Patrick Leahy – broadcast on Nashville’s Talk Radio 98.3 and 1510 WLAC weekdays from 5:00 a.m. to 8:00 a.m. – host Leahy welcomed Grant Henry of Americans for Prosperity-Tennessee to discuss the Truth in Taxation bill and the transparency it would provide Tennesseans from the reckless spending of cities, counties, and municipalities across Tennessee.

Leahy: We are joined now by Grant Henry. He is the Grassroots Engagement Director for Americans for Prosperity-Tennessee. Good morning, Grant.

Henry: Good morning, sir. It’s a pleasure to be on the program.

Leahy: Interesting bill here. Truth in taxation, which sounds like a common-sense bill to me. It’s a response to the failure of the courts to allow the Nashville Taxpayer Protection Act to go through last year. That issue is in the news again this year. But your truth in taxation sounded like a common-sense transparency solution for that. It got caught up in some skullduggery up on Capitol Hill. (Henry chuckles) Tell us about that.

Henry: That is one word for it. That’s correct. And as you said, it was our response to the Nashville Taxpayer Protection Act. The first one of that being shut down by Judge Lyle, which is an entirely separate conversation there. But after that shutdown, we took this idea, which we currently have a little bit of. We have a form of truth in taxation in Tennessee already.

Most people know this through the certified tax rate. And the obvious idea behind the certified tax rate, which has been law for quite some time is you don’t pay more in the property tax amount that you should pay and couldn’t increase simply because your property value increased. This is currently what Mayor Cooper is trying to do to pass it off as if he is lowering the property tax rate.

The law itself is requiring that to happen. Nevertheless, back on the point, this bill here, truth in taxation would have done something very simple and it would simply propose that when a city or a county has reckless spending and debt problem like Nashville, it will be required to mail in a detailed notice to all citizens of the property tax increase.

People will know exactly how much their individual taxes might go up, what their current tax rate is, when the vote will be held, and they’ll have an opportunity to be heard by these officials before they cast their vote. And you understand the scenario here obviously. It’s that officials can choose to listen to their constituents’ concerns during these public hearings, or they can choose to ignore those concerns.

They’re hoping to go after accountability, reliability, and competitiveness. Now, this was brought up two different times in the same subcommittee. And I don’t know how much you want to get into this right now, but the process of a voice vote in the Tennessee House is one that can seem sometimes be quite problematic when you have the number of votes necessary but the subcommittee chairman hears more no votes than yes votes.

Leahy: He’s got the illusionary ear that he’s sort of a Van Gogh. He hears the no votes but not the yes votes.

Henry: (Chuckles) That’s right. And just to give people some understanding as to what happens here, in the Tennessee House, when the votes go in the subcommittee, and I’ll do a little bit of a mock role play here for you. If I’m the committee chair and I say ayes, the ayes yell, nays, the nays yell. And then I just sort of hear who has more ayes or nays.

So occasionally when the nays are more vocal, that is, you can hear them audibly louder than the yes votes then I will gavel down and say, well the nays move on. On this day, in particular, about two weeks ago, this truth in taxation bill, we, meaning Americans for Prosperity, had ensured that we had five yes votes. And there were eight people on the committee that day. So obviously we had the five yes votes. Four recorded yes votes and our bill sponsor being the fifth yes vote. There were only three individuals that were against this bill. Nevertheless, the nays were still heard audibly than the yes votes.

Henry: This was the property and planning subcommittee. The individuals who voted no on this were the committee chairman, Dale Carr. Representative Dave Wright and Jason Hodges. They were the ones that initially voted no on this bill. And again, if anyone out there appreciates this idea, simple truth in tax station accountability, government transparency bill, one that would allow you to have your voice heard before exorbitant property tax increases are placed on the people. And if I could real quick please give me the luxury to just say Truthintaxationtn.com.

Leahy: Now, did you have a chance to talk to subcommittee chairman, state Representative Dale Carr before this, and did you have an indication that he was opposed to this bill?

Henry: We did. And complete transparency on our end, yes we knew that Dave Wright was against this bill, and we knew that Dale Carr opposed this bill. I suppose Dale Carr had his reasons why, and I’m not exactly sure what the reasons were.

Leahy: So let me just stop for a moment. We’re going to invite State Representative Dale Carr to come in and explain his opposition to this bill, not only his opposition to the bill but shall we say the skullduggery practice in shutting it down. I mean, it seems a little bit unfair in the process. But I’m trying to understand, why would anybody oppose this bill? Do you have any idea?

Henry: Well, I’m trying to sort of steelman the argument here, if I could. And I think people understand what that means. I’m trying to be as fair as possible to Dale Carr’s argument. I think his understanding was that he just doesn’t like the idea of sort of a statewide imposition on East Tennessee. He doesn’t like the idea of some type of mandate that his local governments would have to follow. To be fair to our side of the legislation, we understood that going into it. This bill would only apply to areas that have a debt ratio above 10 percent.

Leahy: Now, let’s just stop there for a moment, because when you described the bill initially, you said this was designed for local governments, county governments, municipal governments that are reckless in their spending. Now you’ve just added a definition of reckless spending, and it looks like what that definition is that these are bills where the standard is local governments that have a spending problem that is a debt to asset ratio where the debt is more than 10 percent of the assets. Is that right?

Leahy: And by the way, where is Nashville on that list?

Henry: The exact calculation I’m not exactly sure. Don’t quote me. I want to say around 13 to 14 percent. Someone’s going to have to look up those numbers.

Leahy: So Representative Carr is from East Tennessee. Is that correct?

Leahy: But in that county in his area, are there any counties that would fit into this category of reckless spenders?

Henry: Well, you have Alcoa City that’s out there. But it’s obviously not in Sevier County. And again, on the date that these votes go down trying to be fair to Representative Carr here, it could have happened that he heard more no votes audibly. I need to go watch this video recording back. It’s all placed on these hard drives out there. You can literally go to the state website and watch this hearing for yourself. He could have heard more no votes than yes votes.

But at the same time, it seems somewhat coincidental that he was against this bill and also heard no more. East Tennessee doesn’t have these kinds of problems. But I can tell you, after working on the Nashville Taxpayer  Protection Act over this past summer how terrible and disheartening some of these personal stories were some of the people that I worked with to gather just 27,000 signatures indicated to me that they have small businesses and they are going to have to figure out whether to shut their small business down, paying for certain types of medicine, or pay for some property tax increases.

And this is not just a sense of fear-mongering. I heard this on multiple different occasions from everybody all the way from the Belle Meade areas all the way to the Antioch areas. We have these stories out there by people that are least able to afford the property taxes are the ones that it hits the worst. And it’s time to have these people’s voices heard.

Leahy: Now, speaking of the voices being heard, sometimes the Tennessee General Assembly is still in session, and sometimes bills that you think are dead come back. Is there a chance for the Tennessee truth in taxation bill for 2021 to come back to this session?

Henry: No. We tried that actually last week to bring it back one time through a procedural motion that would allow someone in the non-prevailing party meaning someone who is not recorded as yes to cite a motion to bring the bill back. And we needed six votes that day. We, unfortunately, could not get to six yes votes.

So this year it will not be coming back. But part of the reason why I like to stress it so much and part of the reason why I appreciate you indulging me this morning with this is that we will obviously be bringing this back next year. And I think it plays a little bit into currently what Mary Cooper is talking about as Nashville is sort of trying to pull the wool over people’s eyes by saying you’ve got to lower the property tax rate.